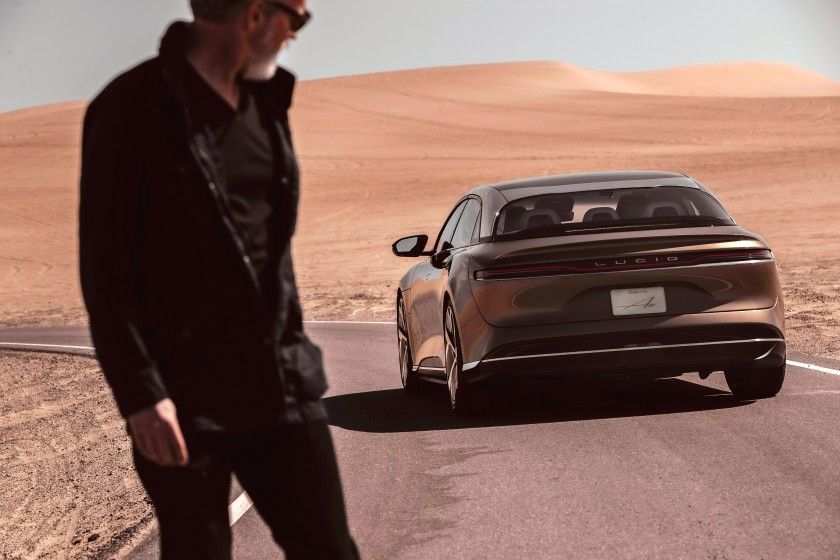 Lucid Motors was near death and desperate for cash in 2018 when it was handed a lifeline. The savior was Saudi Arabia.

Now, in 2021, the Saudi fund and Lucid’s founders are poised to cash in by taking advantage of the manic market in so-called blank-check shell companies, also known as SPACs.

In a deal that is near completion, according to a source familiar with the negotiations, the company would draw a hefty but as-yet undetermined amount of cash to fund its operations. If the deal goes off without a hitch, Lucid executives and board members — including Chairman Andrew Liveris, a former Dow Chemical chief executive with deep financial ties to Saudi Arabia — would get a shot at a big payday.

In a bull market that the word “frothy” hardly does justice to, increasing numbers of private companies are looking to cash out through special purpose acquisition companies — SPACs.

SPACs offer a quicker, easier, more secretive way to take a private company public versus the conventional initial public offering, or IPO. Through a sale to a blank-check entity, a company that wants its shares traded on public markets can get there much faster — typically several months versus up to a year for an IPO — with much less disclosure of its inner workings and the associated red tape.

Once considered a sketchy alternative, in the high-momentum markets of 2020 into 2021, SPACs have become very popular. Last year, $73 billion was raised in SPAC deals, up from $13 billion in 2019, according to Goldman Sachs. For the first time last year, the volume of SPAC deals outpaced that of traditional IPOs, which came in at only $67 billion.

“EV entrepreneurs have figured out they can ride the Tesla wave,” said David Kirsch, business professor at the University of Maryland and coauthor of the recently published book “Bubbles and Crashes.”

It’s a phenomenon he thinks has all the hallmarks of a bubble, with Tesla’s mind-blowing $800-billion valuation stoking imaginations. Electric-vehicle manufacturing is a capital-intensive undertaking, so companies are likely to strike when the market offers what they expect to be top dollar.

The SPAC phenomenon specifically has Kirsch and many others worried because the markets are being driven higher now in large part by unsophisticated retail investors.

“When you combine [SPACs] with Robinhood investing, the gamification of finance, fractional share ownership and novice investors, there’s a lot of opportunity for opportunistic behavior,” Kirsch said.

He was speaking generally, but elements of the Lucid deal merit a closer look. There’s no indication that the company is anything but the real deal, with its luxury Lucid Air automobile ready to roll out of the company’s new Arizona factory in coming months. The car’s stylish interior and exterior and its electric-drive innovations have drawn widespread approval.

“Lucid Motors has always been clear about its intent to go public at some point in order to accelerate the adoption and global availability of Lucid’s exclusive electric vehicle and sustainability technologies,” the company said in an emailed statement. “Currently, our focus continues to be on bringing Lucid Air to production in spring of this year, with the strong support of key investors and our partners at the Public Investment Fund.”

Yet the deal itself, and the details of its owners’ financial relationships and strategic goals, could well affect the company’s performance.

Quick explainer: A SPAC goes public with no assets but with a plan to acquire, at some point, at least one private company.

In a bull market, this arrangement can yield a bonanza for insiders. Whether on the SPAC side or the private company side, they can buy shares in the SPAC at the typical price of $10 a share.

Those shares often come with warrants, which are future options on the stock. If the public markets take the stock higher, they profit. If it goes higher than the option stock price, often set at $11.50, they profit more. Several of the earlier EV SPACs have nearly doubled in price.

Retail investors may know that Lucid is a hot electric car company, but probably don’t know much at all about how the pending SPAC deal is structured.

Liveris, for example, not only serves as Lucid’s chairman but also is an operating partner at Churchill Capital IV, the SPAC that’s planning to buy Lucid (Ticker: CCIV). That makes Liveris a player on both sides of the deal. Kirsch said it’s highly unusual to have officers from the acquired company hold an operating role in the SPAC.

The Times asked to speak with Liveris, but Lucid declined and Churchill did not respond.

Liveris’ tenure at Lucid has been kept under wraps. He’s included on the carmaker’s board of directors page, but the company never issued a news release or made any other announcement when he became chairman.

Asked when Liveris joined Lucid, a spokesman for the carmaker said via email: “Unfortunately, I’m not able to share that information at this time.”

The Wayback Machine at the Internet Archive shows Liveris first mentioned on the Lucid website in November 2019. Whether he joined Lucid when the sovereign wealth fund announced its $1.3-billion investment in Lucid on Sept. 17, the company won’t say. Two weeks before that, Liveris was named special advisor to the Saudi sovereign wealth fund, formally known as the Public Investment Fund.

Lucid drew the Saudi fund money in the nick of time. In October 2018, agents of the Saudi government murdered Washington Post columnist and royal family critic Jamal Khashoggi, putting many international deals with Saudi Arabia at least temporarily on ice.

Liveris’ Saudi connections run deep, as do Michael Klein’s. Klein is the CEO of the Churchill SPAC. He’s a longtime advisor to Liveris. When Liveris ran Dow, Klein led the creation of a joint venture between Dow and Saudi Aramco, the giant oil company, to build a mammoth $20-billion chemical plant in Saudi Arabia’s Jubail Industrial City.

The venture, named Sadara, is owned 65% by Aramco and 35% by Dow. It has proved to be a financial debacle.

The Saudi Public Investment Fund helped finance the Sadara deal. That’s the same fund that put $1.3 billion into Lucid. The head of international investments for that fund, Turqi Alnowaiser, is a Lucid board member. Lucid said Alnowaiser was not available for comment.

Cash flow is so stressed at Sadara that Dow lent $280 million to Sadara over the first nine months of 2020 and expected that amount to reach $400 million by the end of the year, Dow said in its most recent financial report. Whatever money the Saudi wealth fund lost on Sadara, it might earn some back through the Lucid SPAC.

Meanwhile, Liveris now serves on the board of directors at Saudi Aramco. He left Dow in 2018 under a cloud, after a settlement was reached with the SEC, which accused the company of failing to disclose about $3 million in perks it gave the CEO. Liveris returned several hundred thousand dollars to Dow, including reimbursing the company for money spent on family vacations.

“His name is not one to inspire confidence that everything will work out in a hunky-dory, kosher way,” said Francine McKenna, an accounting and audit expert and publisher of the Dig, a subscription newsletter.

Besides the financial twists, the Sadara deal raises strategic questions for potential Lucid investors. Earlier this month, Bloomberg reported that Lucid is in talks to build a car factory in the Red Sea city of Jeddah. Lucid declined to confirm or deny the report.

Saudi Arabia has been investing heavily in alternative energy projects to prepare for the oil industry’s decline as electric-powered vehicles replace internal combustion engine cars and trucks. Does it make strategic sense to build a Lucid factory in Saudi Arabia, or might it end up a white elephant like Sadara?

There’s no clear answer at present. But answering — or even asking — relies on information that SPAC retail investors rarely have access to.