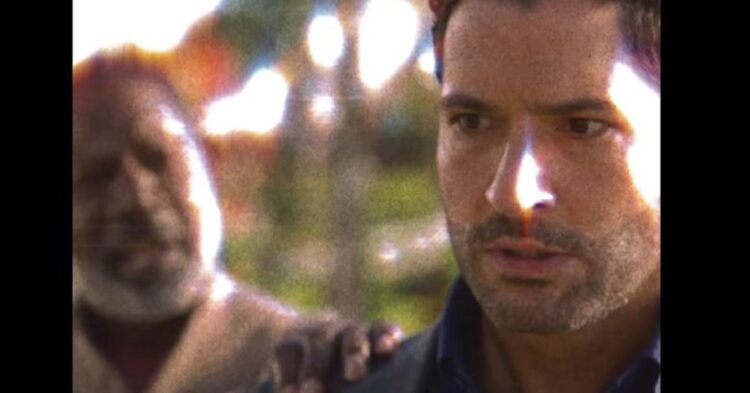 Along with the sadness that comes with knowing the series is wrapping up production on its sixth and final season, this week has also been a week of reveals for Lucifer fans- and that continued on Tuesday, courtesy of series co-showrunner Ildy Modrovich filling in the final piece of the episode puzzle. That’s right, we now know the details on the tenth and final episode: “Partners ‘Til the End,” directed by Sherwin Shilati and written by Modrovich and co-showrunner Joe Henderson. But let’s not get too far ahead of ourselves- Lucifans have Season 5B to look forward to on May 28.

Here’s a look at Modrovich’s tweet from earlier today revealing the details on the final chapter- with a sweet photobomb in the background:

Here’s a return look at two special “fan-cam” moments offering brief teases of what fans will be getting when the second half of Season 5 debuts. At the end of the first clip, Chloe Decker (Lauren German) wants to know where God took his family. In the second clip, viewers get a look back at the first half of the season before a brief look at what’s to come- with “dear old dad” God having to ask Lucifer something…

Speaking of Season 6, how about some intel on the episodes in the form of titles, directors, and writers? Because that’s what the show’s writers have offered over the past few weeks. For our ten chapters, we have (with directors/writers) “Nothing Ever Changes Around Here” (Kevin Alejandro/ Mike Costa), “Buckets of Baggage” (Richard Speight Jr. / Jen Graham Imada), “Yabba Dabba Do Me” (Nathan Hope / Joe Henderson), “Pin the Tail on the Baddie” (Viet Nguyen / Carly Woodworth), “The Murder of Lucifer Morningstar” (Lisa Demaine / Lloyd Gilyard Jr.), “A Lot Dirtier Than That” (Claudia Yarmy / Ildy Modrovich), “My Best Fiend” (Nathan Hope / Julia Fontana), “Save the Devil, Save the World” (DB Woodside / Aiyana White), and “Goodbye, Lucifer” (Kevin Alejandro / Chris Rafferty), and “Partners ‘Til the End” (Sherwin Shilati / Ildy Modrovich & Joe Henderson).