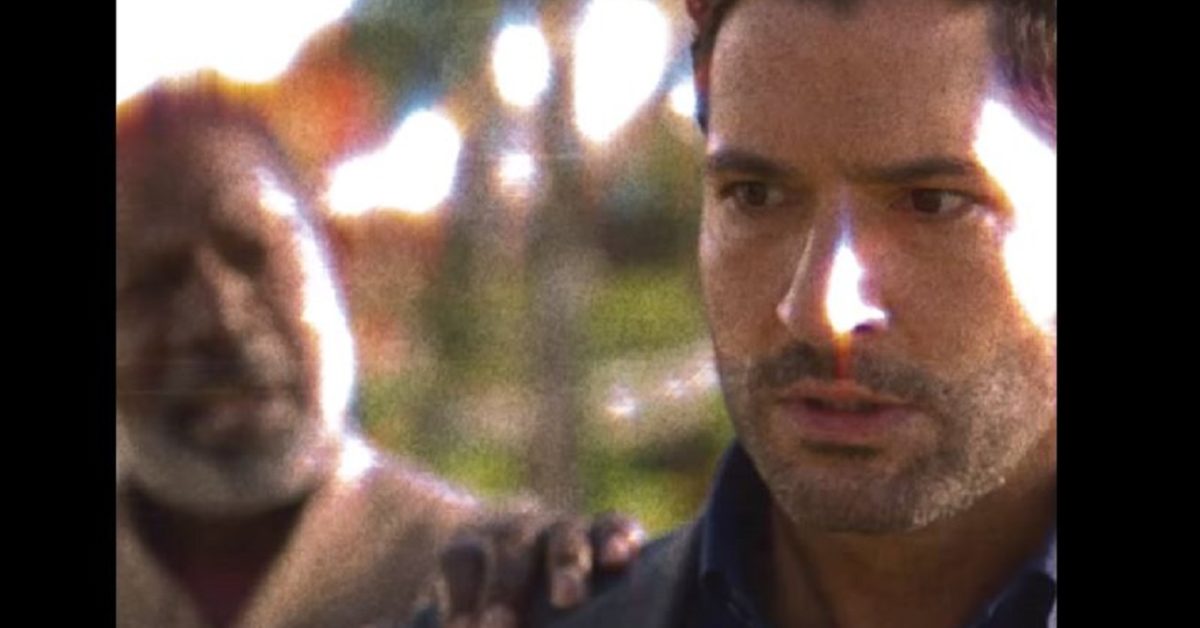 Okay, we know. Our Lucifer updates have been a little bit on the heartbreakingly cruel side as of late, covering a lot of lasts from series star Lesley-Ann Brandt (Maze)- the last wardrobe session, the last training sessions for her last fight scene, and even a look at filming her final scene with co-star Tom Ellis. So as filming rolls along on Episode 609 “Goodbye, Lucifer” (directed by Kevin Alejandro), episode writer Chris Rafferty is offering Lucifans a chance to smile for a few minutes courtesy of the seductive nature of his hair and the intoxicating impact it has on Ellis. Don’t believe us? Check out the incriminating evidence Rafferty shared on Instagram below.

Here’s a look at Rafferty’s post from earlier today so you can judge for yourselves- personally? We think there’s a bit of longing in Ellis’s eyes:

While Lucifans wait for news on the series’ return (we mat have given up trying to predict a date), here’s a look back at those two special “fan-cam” moments offering brief teases of what fans will be getting when the second half of Season 5 debuts. At the end of the first clip, Chloe Decker wants to know where God (Dennis Haysbert) took his family. In the second clip, viewers get a look back at the first half of the season before a brief look at what’s to come- with “dear old dad” God having to ask Lucifer something…

Lucifer, bored and unhappy as the Lord of Hell, resigns his throne and abandons his kingdom for the gorgeous, shimmering insanity of Los Angeles, where he gets his kicks helping the LAPD…and the savvy detective Chloe Decker in particular. In Part A of season 5, Lucifer’s twin brother Michael secretly takes the devil’s place on earth while he’s back in Hell. Eventually, Lucifer must return and face the mess his brother made with his life. He’ll also finally confront his feelings for Chloe, and answer a question fans have been asking since the very beginning: “will they or won’t they”?

Speaking of the sixth season, how about some intel on the episodes in the form of titles, directors, and writers? Because that’s what the show’s writers have offered over the past few weeks. For our first eight chapters, we have (with directors/writers) “Nothing Ever Changes Around Here” (Kevin Alejandro/ Mike Costa), “Buckets of Baggage” (Richard Speight Jr. / Jen Graham Imada), “Yabba Dabba Do Me” (Nathan Hope / Joe Henderson), “Pin the Tail on the Baddie” (Viet Nguyen / Carly Woodworth), “The Murder of Lucifer Morningstar” (Lisa Demaine / Lloyd Gilyard Jr.), “A Lot Dirtier Than That” (Claudia Yarmy / Ildy Modrovich), “My Best Fiend” (Nathan Hope / Julia Fontana), “Save the Devil, Save the World” (DB Woodside / Aiyana White), and “Goodbye, Lucifer” (Kevin Alejandro / Chris Rafferty).

Sugandha Mishra to replace Maniesh Paul as the host of Zee TV’s...

Game of Thrones Prequel Tales of Dunk and Egg in Series Development?

Lovebirds Aly Goni and Jasmin Bhasin jet off for another couple vacation...

Vaani Kapoor: Big films get you eyeballs but with it comes scrutiny

Kundali Bhagya’s Shraddha Arya is all set for the New Year with...