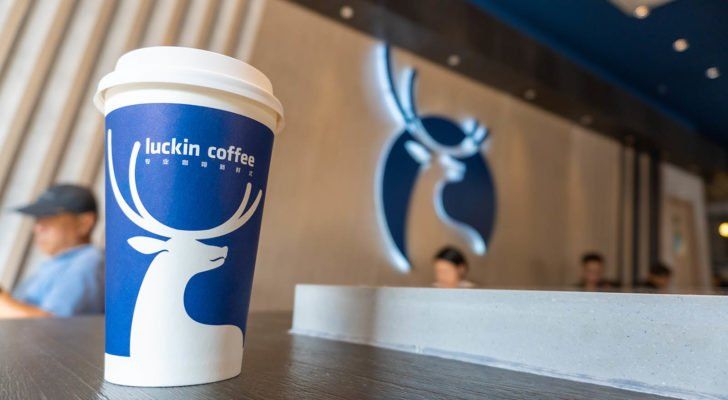 In April of 2020, Luckin Coffee (OTCMKTS:LKNCY) admitted that its executives had been executing a fraud. Luckin stock had faded into the news amid similar allegations from short sellers. When the company confirmed the market’s worst fears, the stock dropped 75% in a single session, and then kept falling.

Indeed, a stock that had closed at $50.02 on Jan. 17 was halted at $4.39 less than three months later. When Luckin stock finally came off its halt in May, the stock dropped another 68% in three sessions to an all-time closing low of $1.39.

At those lows, there was a case for the stock. The company presumably still had a decent amount of cash on the balance sheet. It had raised $865 million in January thanks to equity and debt offerings. Even if 2019 and 2020 revenue figures had been inflated, the business was at least real. There was still at least a chance for Luckin to resume its previous growth, in a perhaps more measured (and more ethical) manner.

Investors who bought that case have done well: LKNCY stock has cleared $10. And the rally has come in part because that contrarian bull case proved to be valid. Luckin’s business is real, and it’s showing impressive growth. Profitability is in sight.

Indeed, investors who were bullish below $2 likely remain bullish at $10. If anything, Luckin’s results since April probably have been better than even some optimists thought.

The catch is that the same bear case holds as well. There are red flags here that go beyond the well-publicized fraud. And after the rally, Luckin doesn’t necessarily look cheap. Bulls have been right so far (and, admittedly, I’ve been wrong) but back in the double-digits, Luckin stock simply looks too risky.

The Business Holds Up

According to Luckin’s internal investigation, the fabricated transactions underpinning the fraud began in April 2019. Revised, audited, and corrected financials for the period since then are unavailable.

But in December, well-known restructuring advisory firm Alvarez & Marsal submitted a report to the Grand Court of the Cayman Islands. That court is overseeing the provisional liquidation of Luckin — essentially a restructuring process.

That report highlights a business doing reasonably well. Net revenue for 2020 is expected to come in between 3.8 billion RMB and 4.2 billion RMB. That suggests solid growth against 2019 revenue (per quarterly figures cited in the report) of 3.025 billion RMB.

Store-level profitability is improving as well. In August of 2020, Luckin hit “store level break-even” for the first time. Obviously, corporate expenses still push the overall company into the red. But there were legitimate concerns that Luckin’s store-level economics simply didn’t work. Bears argued even before the fraud that Luckin’s exponential growth came from metaphorically selling a dollar for 95 cents.

Underneath the improvement is a fairly logical strategy. Luckin has closed unprofitable stores: over 800 of them just in Q2 and Q3. It’s moved to a partnership model for some locations. That model will in turn allow for continued expansion while minimizing the required cash from Luckin itself.

As a result, A&M expects Luckin to reach breakeven in terms of cash flow by the first half of 2023, and “possibly sooner.” And with $742 million in the bank (as of Nov.30), Luckin has the cash to cover losses until then and, presumably, to repay its bondholders.

And so the rally in LKNCY stock isn’t a sign of investors throwing good money after bad. In fact, it’s not just the stock that has rallied. The convertible bond at the center of restructuring has tripled since June.

As A&M put it, “there is a viable path to restructuring the Company’s indebtedness in a manner designed to allow the Company to continue as a going concern.” And once the debt is restructured (and/or repaid), and the fraud is in the rearview mirror, Luckin presumably becomes a ‘normal’ company.

That company looks attractive. 2020 revenue growth should come in at or above 30% year-over-year. That follows what appears to be 260% growth in 2019 (based on the newly released figures and previously disclosed sales for 2018, which as far as we know are accurate).

Another report from A&M is due imminently, and it may provide more color and more reason for optimism. It’s fair to at least wonder if the pre-fraud bull case can return — or is already returning. That suggests real upside in Luckin stock.

The Case Against Luckin Stock

The catch is that LKNCY stock has priced in at least some of that upside. Based on previously disclosed shares outstanding, Luckin now has a market capitalization of about $2.7 billion. The midpoint of 2020 revenue guidance is roughly $620 million.

That’s a more than 4x price-to-sales multiple for a relatively low-margin company. It’s also a company that still hasn’t completely proven its business model works. Starbucks (NASDAQ:SBUX) remains a tough rival in the Chinese market. Yum China (NYSE:YUMC) is a long-time winner in that market, and trades at roughly 3x revenue.

But there are issues that go beyond the numbers as well. The company’s new chief executive officer, according to Luckin itself, is facing unspecified employee allegations. Those allegations don’t concern Luckin’s financials, but the existence of such an investigation itself is a concern for a company obviously in need of an improved culture.

Chinese stocks more broadly pose more regulatory and governance risk, which has been seen in names ranging from Alibaba (NYSE:BABA) to GSX Techedu (NYSE:GSX). And there’s the fact that this company executed a simply massive fraud just a few quarters ago.

Literally half of the revenue guidance for the fourth quarter of 2019 proved to be fictitious. When a sharp-eyed short-seller recognized the fraud, Luckin instantly and falsely denied the accusations.

To be fair, there’s a case here. It may be that come 2025, Luckin is fighting Starbucks tooth and nail, the fraud is in the past, and LKNCY stock is back to LK because it’s returned to a U.S. exchange. As far as lottery ticket-type bets go, it’s not a terrible one to take.

But so many red flags remain. From here, Luckin still has a lot to prove. And after a 700% rally from the lows, I’m not convinced that problem is priced in.

On the date of publication, Vince Martin did not have (either directly or indirectly) any positions in the securities mentioned in this article.

The post Luckin’s Business Is Surprisingly Solid, But Luckin Stock Still Is a No-Go appeared first on InvestorPlace.