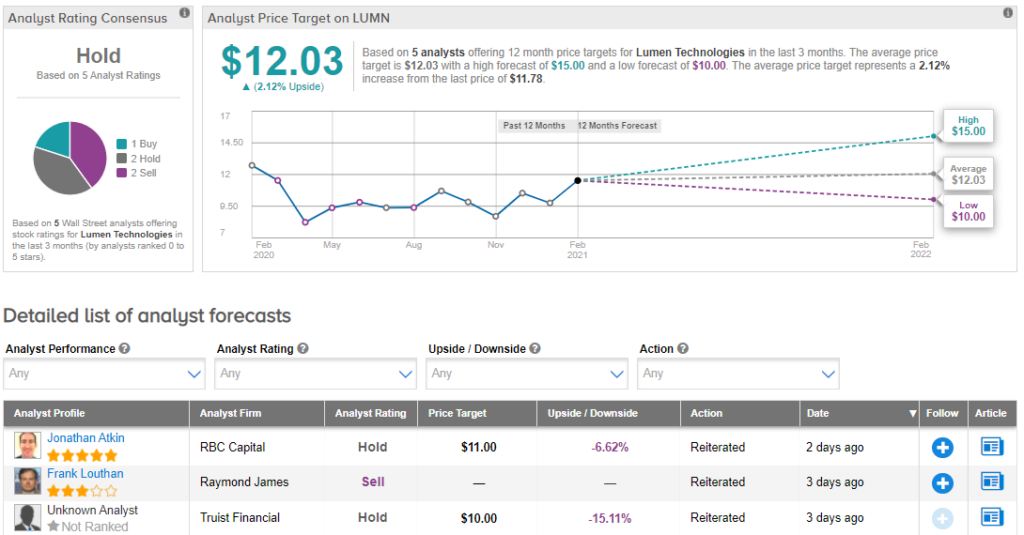 Lumen Technologies (LUMN) reported earnings on February 10, posting a beat on the bottom line even as revenue came in slightly less than forecasted. In response, shares took an 8% tumble in the following session.

The company has been in the process of making a challenging pivot away from the broadband services space – an area that is seeing declining revenue due in part to a lack of pricing power.

On the company’s earnings call, CEO Jeffrey Storey reminded analysts that the last several years have been a time in which the company was making this transition. That work, according to Storey, came to fruition late last year when Lumen launched its Lumen Platform.

The Lumen Platform reflects the company’s foray into what it calls the “4th Industrial Revolution.” Put another way, it’s Lumen’s attempt to become a high-performance, fiber-based company with a presence in the hybrid cloud space.

By the looks of LUMN stock the day after its earnings release, investors don’t appear to be that excited. The reason may be related to its need for some serious growth. Specifically, some investors are concerned that achieving this growth could come at the expense of LUMN’s most appealing aspect, its dividend.

Will Its Strength Be Its Weakness?

One attribute of LUMN stock that has kept investors interested is its dividend, which not too long ago was yielding over 10%. That said, dividend yields can be a little deceiving. The company’s dividend for the full year was $1/share, paid out in quarterly installments.

This could very well suggest that LUMN’s biggest asset was its dividend. However, as the company makes this transition, they may need to cut its dividend to fuel the growth they need.

In fact, that process is already underway. In early 2019, Lumen slashed its quarterly dividend by more than half from 54 cents to 25 cents. Not surprisingly, LUMN stock plunged approximately 30% at that time. However, the company has held the line on the dividend in the last two years, and that should be recognized considering many companies suspended or cut their dividends during the pandemic.

Lumen now finds itself in a delicate situation. On the one hand, it will want to maintain the stability of its dividend. On the other, the company might need to continue to chip away at it to fund future growth.

Lumen Is Shoring Up Its Balance Sheet

For now, at least, that concern may be alleviated. On the earnings call, the company reported that it has managed to restructure its debt. The maturity on its largest debt obligation has been pushed out by two years to 2027. The plan is for the company to use its future cash flows, which are expected to grow, to pay down that debt. For 2021, Lumen has debt obligations of $2.4 billion.

Based on the information in its earnings presentation, LUMN finished the year with $2.9 billion in free cash flow and a requirement of $1.1 billion to meet its dividend obligation.

Lumen also reported that it continues to engage in cost-cutting initiatives that should help further boost margins. And right now, it appears that Lumen has adequate free cash flow to meet its debt obligations.

The analyst community gives LUMN a consensus rating of Hold, based on 1 Buy rating, 2 Holds and 2 Sells. Given its average analyst price target of $12.03, shares could rise 2% in the year ahead. (See Lumen Technologies stock analysis on TipRanks)

Wait For Better News From Lumen

Towards the end of his prepared remarks, Storey noted that the company will participate in a virtual investor day in the spring. At that time, he alluded to the fact that more information will be forthcoming regarding the company’s existing partnerships. This includes a very intriguing one with VMware (VMW).

However, outside of a potential dividend announcement, there’s nothing that’s particularly compelling about owning LUMN stock right now. Stay on the sidelines and wait for a better revenue story.

Disclosure: On the date of publication, Chris Markoch did not have (either directly or indirectly) any positions in the securities mentioned in this article.

Disclaimer: The information contained herein is for informational purposes only. Nothing in this article should be taken as a solicitation to purchase or sell securities.