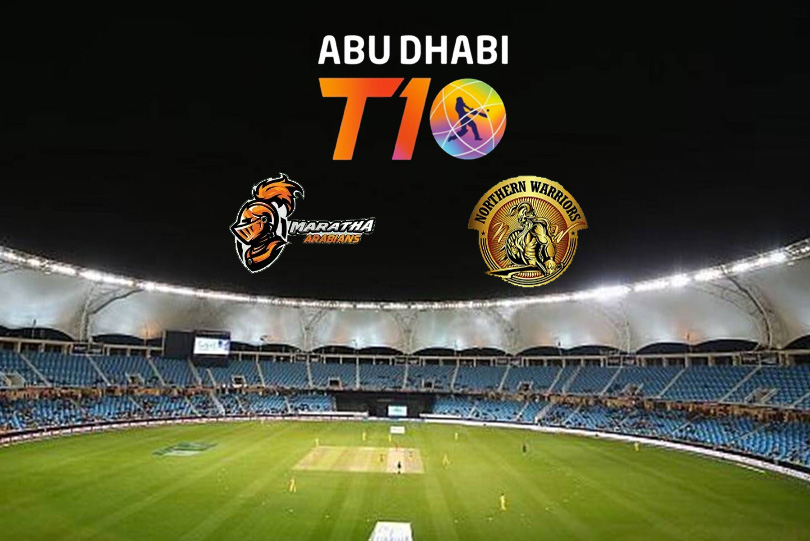 MA Vs NW Dream11 Prediction: Maratha Arabians Vs Northern Warriors Abu Dhabi T10 League 2021 Dream 11 Team Picks, Pitch Report, Probable Playing 11 And Match Overview, MA Vs NW LIVE at 5:35 PM IST Thursday 28th January on Insidesport, Across the course of the last year, a slew of T10 leagues have sprung up in the cricketing arena. With the cricketing arena being shut down due to the ongoing Coronavirus pandemic, the 10 over format was the only way to organise small and short matches keeping in mind the requisite COVID norms.

However, the T10 Cricket League has continued to stand tall and maintain its stature as the one true authentic ten over format league despite the birth of new leagues. The first and only ICC sanctioned T10 league, the competition returns for its fourth season starting today.

A 10 day period will see the sides partake in a 29 match format, one which will see three matches be conducted per day during the group stages.

Although they are reigning champions, Maratha will fail to get past this electric Northern batting unit.

With this being the first match of the league to be played here, we’ll be in for pristine batting conditions, ones the team winning the toss will be striving to make the most of by batting first.

With this encounter being held in the afternoon, we’ll be in for profound heat.

We begin our set of picks with the selection of Nicholas Pooran, a player who was in absolutely resplendent touch in the IPL.

Maratha on the other hand will see Laurie Evans be ingrained in our setup owing to his ability to slash at the ball in the powerplay period.

Shoaib Malik will form the one-two of batting picks from the club.

Northern’s duo in this docket meanwhile comprises of starlet Lendl Simmons and Brandon King. The two West Indian names are the focal point of the team’s batting contingent, players who can propel the team to a win today.

Fellow countryman, Fabian Allen links up with the two. Maratha’s first pick will be of Mohammad Hafeez owing to the player’s ability to come out and send down a couple of overs of spin as well.

Not only can Mosaddek Hossain lure batsmen into going for the false shots but he has an ability to play some lusty blows as well.

Not only is Northern’s batting unit one of the best in the league but the side is well endowed in the bowling slot as well. We’ll be making this unit all about the picks from the club with the trio beginning with the selection of Rayad Emrit.

Junaid Siddique’s to send down a wicket to wicket line and length sees him and new ball operator, Wahab Riaz complete our set of picks for the outing.

Maratha Bat First: Pooran’s ability to go on a rampage sees him be our captain while Simmons is the vice-captain.