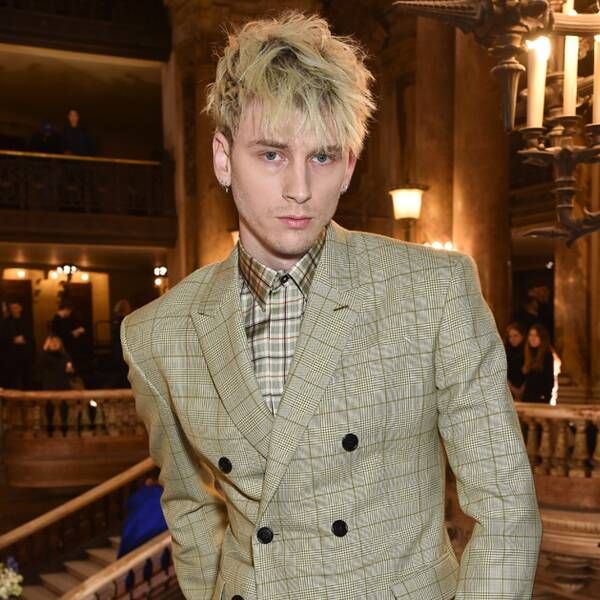 It hasn’t been the easiest time for Machine Gun Kelly.

“I just wanna say to my fans I’ve been in, kind of like, a f–ked up place personally for a couple of months in my head,” he said. “So, I haven’t been that active on socials.”

However, Kelly shared some good news regarding his musical film Downfalls High, which premiered on Facebook Jan. 15.

“I just got a call from the label about Downfall Highs. The premiere weekend, we got 12 million views on Facebook, dude,” he said, later correcting himself and saying it was actually 16 million. “I’m, like, tripping out.”

Kelly also promoted the musical’s YouTube premiere and thanked his followers for watching the Tickets to My Downfall-inspired movie, writing, “Thanks to everyone who helped us turn the album into its own world and era.”

Kelly didn’t go into detail about this difficult time. But over the weekend, he tweeted, “Anxiety’s eating me alive.” Again, he didn’t share specifics.

Kelly has always been open with his fans about the challenges he’s faced in life. For instance, during a recent talk with Dave Franco for Interview, he spoke about his past Adderall abuse and his relationship with his father, who passed away in July 2020.

“I came from a father who was extremely religious and extremely strict, and wouldn’t even let me hold my pen the way I wanted to hold my pen,” he said at one point during the interview, which was published in November. “That made me rebel completely, and cut off communication completely, because I didn’t want to have any common ground with him. I don’t want to have that with my daughter. Honesty is the key to that relationship. But also, as I grow, that same person who I was when I was 25 isn’t who I am now. Currently, my drug of choice is happiness and commitment to the art, rather than commitment to a vice that I believed made the art.”

Kelly also noted he was beginning to take steps towards healing, including having his first therapy session that past week.

“That’s the first time I ever went, ‘Hey, I need to separate these two people,’ which is Machine Gun Kelly and Colson Baker,” he said at the time. “The dichotomy is too intense for me.”

And while he said he was still “early in the process,” he noted he found the tools he received helpful.

“I’m still kind of ripping my hair out,” he told Franco. “Why am I not changing overnight? How am I supposed to meditate for 10 minutes when I can’t even sit in my own brain for two minutes without distracting myself by doing something? That’s really hard. But the commitment to change is inspiring, and I think will reverberate through the universe and definitely through my family. I can see it already with the people around me. The willingness to finally be happy with my own self has invited a much more vibrant energy around us than before.”

He also credited fellow musician Travis Barker and Megan Fox, the latter of whom he fell in love with after meeting on the set of their movie Midnight in the Switchgrass, with offering support. As he noted about the actress, “Obviously, which I’m sure is the same with you in your relationship, when you have a partner, mine being Megan [Fox], sitting there with you on those dark nights when you’re sweating and not being able to figure out why you’re so in your head, to help you get out of your head and put it in perspective, that really, really helps.”