Home General Macron, Once a Darling of Liberals, Shows a New Face as Elections Near

Macron, Once a Darling of Liberals, Shows a New Face as Elections Near 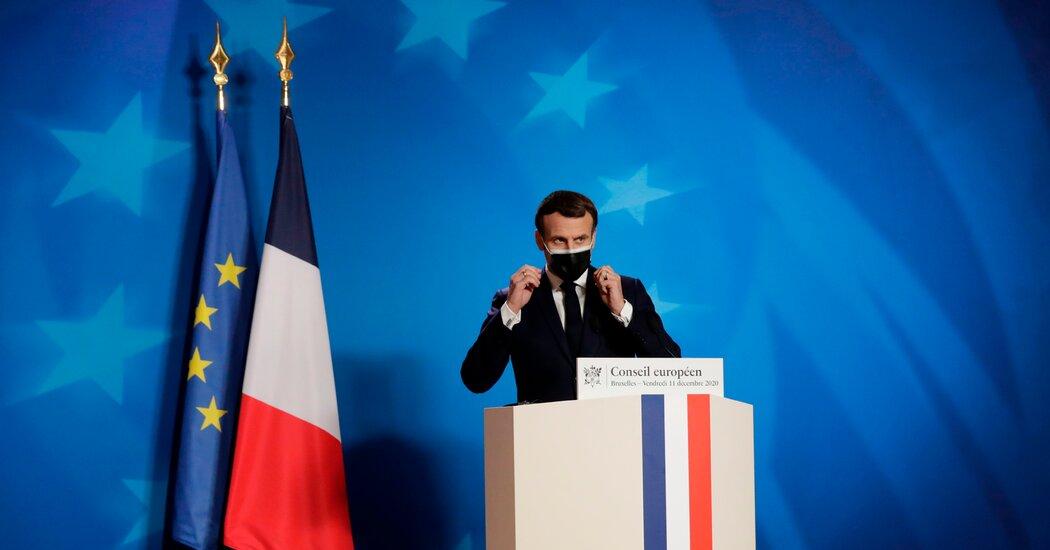 PARIS — He was the boy wonder of Western politics in 2017, soaring above outmoded cleavages between left and right. He was the whip-smart former banker who was going to turn a tradition-bound society into a start-up nation. He was the liberal bulwark against rising populism in Europe — an anti-Trump.

But with an eye on his next election, President Emmanuel Macron has tacked to the right, alienating former supporters and current members of his own party.

An often incoherent handling of the coronavirus pandemic has dinted Mr. Macron’s competent image. And after three recent Islamist terrorist attacks in France, Mr. Macron has pushed forward bills on security and Islamist extremism that have raised alarms among some French, the United Nations and international human rights groups.

A malleable politician who came out of the left, Mr. Macron has always been known as a shape-shifter. His slide to the right, underway for at least the past year, has picked up steam in recent months and is regarded by some as a clean break from the first three years of his presidency.

“Today, we see clearly that it’s an altogether different Emmanuel Macron,” said Pierre Rosanvallon, a professor at Collège de France who specializes in French democracy. “How do we understand this change?”

Saying that his policies have been misunderstood, Mr. Macron has lashed out at his critics. In a recent interview with Brut, a youth-oriented online news site, Mr. Macron was asked whether he was concerned that his international image had changed from that of a “modern, liberal president” to “an authoritarian president.”

“When you’ve read all that I’ve read about me, in France or abroad, you don’t feel anything anymore,” Mr. Macron answered. “I don’t care.”

With France’s parties on the left in a shambles, Mr. Macron’s main challenger in the 2022 presidential election is once again expected to be Marine Le Pen, the leader of the far-right National Rally. Mr. Macron is chasing an electorate that has been moving right: An analysis by a market research company, OpinionWay, showed that his party, La République en Marche, has lost substantial support among left-leaning voters, and gained on the right.

If recent polls show that the move right has helped him, his supporters argue that his new positions — on sensitive issues like police violence, secularism or Islamism — simply reflect growing threats. A spokeswoman for Mr. Macron did not respond to requests for comment for this article.

François Patriat, a French senator and longtime supporter of Mr. Macron, said the president had “evolved on a variety of doctrines” — including security and the defense of France’s model of secularism — following “confrontation with the reality on the ground.”

Others, like Mr. Rosanvallon, say Mr. Macron — who served as the economy minister under the previous president, François Hollande — had a clear agenda on economic matters in 2017, but only partially formed stances on social issues.

Mr. Macron was elected president in 2017, at age 39, in unusual circumstances: Mr. Hollande chose not to run for a second term, and the campaign of the leading candidate, from the right, imploded over a financial scandal.

Three years into his presidency, Mr. Macron has hewed to pledges to make the economy more competitive by overhauling labor laws and reducing taxes, said Jean Pisani-Ferry, an economist and former close adviser to Mr. Macron.

The president’s fiscal policies have helped most economic groups, Mr. Pisani-Ferry said, though he acknowledged that the benefits were greater for the wealthy, who had been taxed heavily under Mr. Hollande. Though Mr. Macron has been criticized in France as the president of the rich, increased spending to defuse the Yellow Vest protests and to respond to the coronavirus pandemic has had the effect of helping lower- and middle-income French, he said.

Mr. Macron recently unveiled a 100 billion euro, or $122 billion, stimulus plan to save jobs and businesses at risk because of the pandemic.

An increasing number of early supporters say that a lack of real follow-up on Mr. Macron’s initially progressive social vision — reducing inequality, empowering France’s disadvantaged minorities, focusing on the social causes of crime or Islamist extremism — have left them disillusioned.

“The initial promise — on the ability and willingness to transform society and to be progressive — is betrayed,” Guillaume Chiche, a lawmaker who left Mr. Macron’s party last May, adding, “Emmanuel Macron is a shooting star that is dying out.”

Mr. Chiche is among 36 lawmakers who have left Mr. Macron’s group in the lower house of Parliament for political reasons, depriving him of an outright majority last May. Most quit in protest against Mr. Macron’s rightward tilt.

The break to the right became clearer in recent months as Mr. Macron and France’s other political leaders began staking out positions ahead of the next presidential election, in April 2022.

In a reshuffling of his cabinet, Mr. Macron replaced his left-leaning interior minister with a hard-liner, Gérald Darmanin. Adopting the language of the far right, Mr. Darmanin pledged to bring order to the country — even though the government’s own statistics show that crime isn’t going up.

Given free rein by the president, Mr. Darmanin has led efforts to push forward a security bill that has been widely condemned, and he has conflated Muslim practices with the government’s crackdown on Islamism.

Pierre Person, a lawmaker who stepped down as deputy chief of Mr. Macron’s party in September, said Mr. Darmanin’s high-profile push on security was a “disavowal” of Mr. Macron’s socially liberal promise.

It is perhaps on one of France’s most politically charged issues — the secularism separating state and religion, known as laïcité — that Mr. Macron’s transformation has been most profound. In the past, he often expressed skepticism about a strict application of that secularism, which critics say is a way to restrict Muslim religious expression.

A few years ago, Mr. Macron denounced “a radicalization of laïcité” and warned against a “vengeful laïcité” used as a weapon against Islam. But he has made a full-throated defense of secularism since the recent attacks following the republication of caricatures of the Prophet Muhammad by the satirical newspaper Charlie Hebdo.

The shift has pleased people like Dominique Schnapper, a sociologist and president of the Council of the Wise, a group created by the education ministry in 2018 to reinforce the secular doctrine in public schools.

“He understood a few months ago,” Ms. Schnapper said of the president’s position on secularism. “But for the first three years of his mandate, he didn’t talk about it. He didn’t want to listen.”

Even as Mr. Macron’s ideas continue to take shape during his presidency, his lack of “political competence” has undermined his ability to push forward his goals, said Mr. Rosanvallon, the historian, citing as an example the current security bill that has caused a crisis because of a provision restricting the filming of police officers.

At the same time, the inconsistency between his words and his actions has led to mistrust, Mr. Rosanvallon said.

“You can make an assumption on someone’s future behavior if his past actions and behavior show consistencies in which you can place your trust,” he said. “But that’s what’s missing now.”