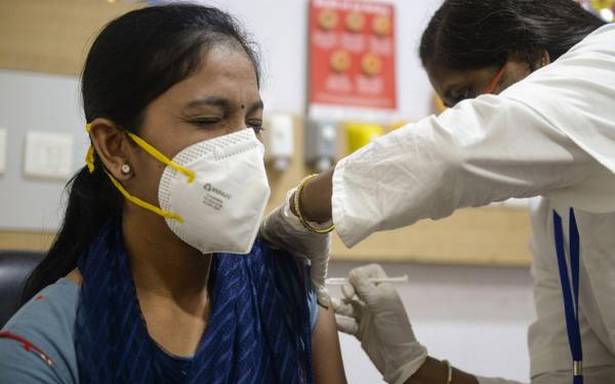 Total cases of U.K. variant in India stands at 166

India reported 163 COVID-19 fatalities in the last 24 hours, with eight States/UTs (Union Territories) accounting for 85.89% of them. Maharashtra saw the maximum of 50, followed by Chhattisgarh (35) and Kerala (19). The other States are West Bengal, Punjab, Tamil Nadu, Delhi and Uttar Pradesh, data released by the Union Health Ministry on Friday said.

The total cases of the U.K. variant in India stood at 166 now and the total active caseload continued to see a sustained downward movement, dropping to 1.71 lakh now. The present caseload consisted of just 1.60% of the country’s total positive cases. India’s caseload per million population was one of the lowest when compared globally. It stood at 7,768. It was much higher in countries such as Germany, Russia, Italy, Brazil, France, the U.K. and the U.S. Also, 17 States/UTs have cases per million lower than the national average (7,768), the Ministry stated.

The new daily cases recorded in the last 24 hours was 18,855, and 20,746 patients recovered and discharged in the period.

Back to Top
Close Add post
X
After 7 Years, Mumbai to Get New Metro Lines in May With Driverless, Disability-friendly Coaches…IndiaImage for representation.The trains will come with many features like passenger announcement and passenger information system.News18.com MumbaiLast Up…

X
Union Budget 2021: To pave way for self-reliant defence sector, increased capita…IndiaWhile an updated defence acquisition policy pedestal has been set-up in 2020 by the defence ministry, a meaningful fund allocation coupled with tax in…
close