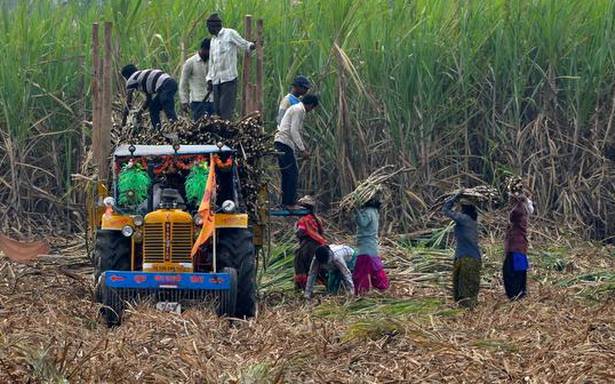 Sugar mills in Maharashtra have paid 87 per cent of Fair and Remunerative Price (FRP) to sugarcane farmers and the State has slapped Revenue Recovery Certificate (RRC) to 13 mills that have failed to pay the FRP. Mills hope to pay full payment to farmers by boosting exports. As per market reports around 43 lakh tons of export have already been signed by mills across the States, of which Maharashtra mills have signed export of about 20 lakh tons.

According to the information given by the State Sugar Commissioner’s office sugar mills in the State have crushed 828 LMT sugarcane for which they had to pay ₹18,221 crore to farmers. As on March 15, mills have paid ₹15,836 crore that is 86.91 per cent of the total payable FRP this sugar season.

Industry players say that arrears of ₹2,385 crore will be paid in the next few days. Our of 188 sugar factories 86 have paid 100 per cent FRP while 65 have paid FRP between 60-99 per cent FRP. The sugar commissioner has issued RRC to 13 mills. The Sugarcane (Control) Order, 1966 has mandated payment of the cane price within 14 days of supply by farmers. If mills fail to make payment in the stipulated time, they have to pay 15 per cent per annum interest on the dues is payable.

Minister of State for Consumer Affairs, Food and Public Distribution Raosaheb Danve told Lok Sabha recently that the excess sugar production during the last three sugar seasons 2017-18, 2018-2019 and 2019-2020 had adversely affected the market sentiments and led to a decline in the domestic ex. mill prices of sugar. Low realization from the sale of sugar due to surplus sugar stocks had adversely affected the financial health of sugar mills, thereby resulting in the accumulation of cane price arrears of farmers.

According to the Indian Sugar Mill Association (ISMA), one of the main reasons for cane price payment arrears is the high FRP set by the Centre as there is no correlation between the revenue generated by the mills and the cost incurred in the production of sugar.

But millers in Maharashtra hope that FRP arrears could be paid if they get good returns from export. Nearly, 48 mills in Maharashtra have closed their crushing operations while the remaining 140 mills are operating. The mills in Marathwada and Ahmednagar regions will start closing in the upcoming fortnight, while most mills in Kolhapur, Satara and Sangli regions will continue in April 2021.

Sugar trader Abhijit Ghorpade said that sugar mills in the State are keen on exporting sugar and special efforts are being taken to improve the export quota. As of now, Maharashtra mills are gearing up to export about 20 lakh ton sugar.

Former MP and Swabhimani Shetkari Sanghatana leader Raju Shetti said that mills don’t share the profit with farmers they earn when sugar prices soar in international and domestic markets. Mills only pay FRP even when they earn good profit in the market and hence millers must not complain about higher production and low prices.