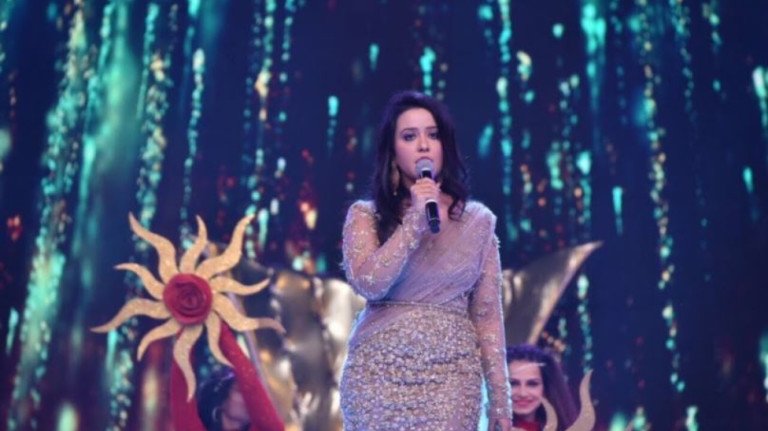 Amruta Fadnavis, the wife of former Maharashtra Chief Minister Devendra Fadnavis faced a nasty backlash from a noted director and producer after she released her new song on the Occasion of Bhaidooj or bhaubeej as it is known in Maharashtra. The song titled ‘Tila Jagu Dya’ has been dedicated to every woman. “Let her learn, Let her have the right to live if you want to make society strong, let her be able first,” she said in a social media post along with a teaser of the song link.

However, along with several social media users, her singing irked noted Marathi film director and producer Mahesh Tilekar who minced no words to strike a discordant note. In some scathing criticism, Tilekar used the tone of advice used for the song, to impart his own advice – ‘don’t let her sing’, he said about the singer, accusing her of ‘troubling’ people with her singing. “Despite having a good voice, due to lack of name and money, no one extends a helping hand and stands behind new singers. Many new singers in Maharashtra with a melodious voice don’t get a simple opportunity, but why is ‘this singer’ who lives in her own world continuously harassing people,” Tilekar asked, referring to her voice. He also claimed that her songs, instead of giving joy, inflict pain on listeners. In an indirect reference to Devendra Fadnavis’ ‘Me Punha Yein’ (I will be voted in again) slogan of the assembly elections, Tilekar added, “People will tolerate the sound of a cow humming, but after hearing the voice of this self-proclaimed singer who insists that she ‘will sing again, and again, and again, there’s nothing that can stop her from exercising her vocal cords.” He further added that if this singer has a lot of extra money, it would be put to better use if she set up a music school to guide new singers with the best of teachers.

Tilekar had more advice for the singer in his Facebook post. “Whatever you say, the word Amruta in the line ‘Aaj Amrutacha Dinu’ sung by Lata Mangeshkar is worth listening to from Lata Didi and hearing Dnyaneshwar Mauli’s voice, “Others should at least try to live up to its name.” Meanwhile, Amruta Fadnavis video featuring the song has already notched up over 10 lakh views in just two days. “I welcome both appreciation and criticism from you – will be back soon with something new for you,” she said in a tweet.

Last week, Amruta Fadnavis, who often finds herself in controversies with her statements and comments, took a swipe at Shiv Sena and praised her husband, who was also in charge of the Bihar elections for the BJP, by saying “No matter where Maharashtra goes, thank you for taking Bihar in the right direction.”