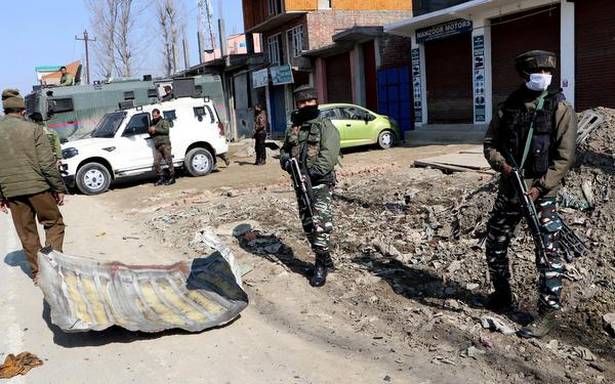 The suspected IED was found on the roadside at Manjakote on Jammu-Poonch highway and was subsequently destroyed by the Army’s Bomb Disposal Squad (BDS), officials said

A major tragedy was averted on Feb. 17 with the timely detection of a suspected Improvised Explosive Device (IED) planted inside a pressure cooker on a busy highway in Rajouri district of Jammu and Kashmir, officials said.

The suspected IED was found on the roadside at Manjakote on Jammu-Poonch highway and was subsequently destroyed by the Army’s Bomb Disposal Squad (BDS), the officials said.

Senior Superintendent of Police, Rajouri, Chandan Kohli said, “This morning a road opening patrol of the Army found a suspicious object along the highway near Manjakote.” “Soon, traffic was controlled on the highway and a bomb disposal squad was called in. The suspected material, packed in a fruit packing box, has been destroyed through a controlled explosion,” he said.

The officer said a case under relevant sections of law was registered at the police station and further investigation is on.

An Army officer said the suspected IED was noticed planted inside a three-litre pressure cooker apparently during the intervening night to set off an explosion.

Earlier, the Station House Officer (SHO) of the Manjakote police station Pankaj Sharma said the bomb-like object was found on the roadside at around 8.30 a.m.

He said the traffic on the highway was immediately suspended as a precautionary measure from both sides.

However, the traffic movement resumed nearly two hours later after the spot was secured with sandbags and an armoured vehicle, the SHO said, adding the suspected material was destroyed around 1.30 p.m.