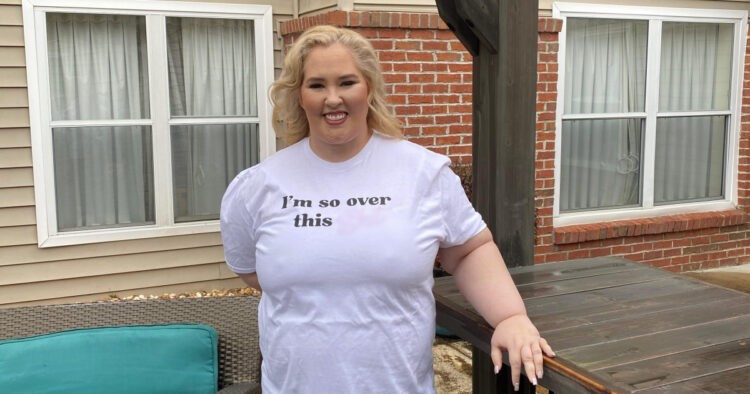 Health scare. June “Mama June” Shannon revealed the reason why she needs to use a walker is because of her recent lymphedema and lipidemia diagnosis.

The reality star, 41, opened up about her condition during a scene with her sister, Jo “Doe Doe” Shannon, on the Friday, March 26 episode of WeTV’s Mama June: From Not to Hot.

“I’ve seen the walker thing in some of your video thingies,” Doe Doe, 56, told Mama June. “So is it because of the drugs?”

Mama June said, “No,” and further explained the reason why she needs to use a walker. “A month ago, when I went to get my chin done, he said, ‘It looks like you got [lymphedema],’” she told her sister.

“[Lymphedema], it’s where fat kinda makes some nodules up underneath your skin and your lymphatic system doesn’t work right,” June revealed in her confessional.

While chatting with her sister, June revealed how her lymphedema has caused her limbs to be different measurements. Her left arm measures at 27 inches while her right arm measures at 21 inches and her left leg was over 13 inches bigger than the right.

As the episode aired, June took to Twitter to share additional details about her health condition. “And yes it’s crazy in [September] last year, I was diagnosed with lymphedema and lipidemia. A lot of women that [are] obese have this. It happens in every 9 women out of 10 so if [you are] having issues, women get checked,” she tweeted.

“And I will say a lot of women are misdiagnosed with having cellulitis and is [sic] being obese. That’s what I was told for years and meeting Dr. Schwartz in Beverly Hills educated me a lot. So [you] have to find to right [doctor],” she added in a separate tweet.

In the episode, June visited Doe Doe for the first time since completing her rehab stint and asked her to reach out to her daughters — Lauryn “Pumpkin” Efird [née Shannon] and Alana “Honey Boo Boo” Thompson. Lauryn, 21, and Alana, 15, had not been answering their mother’s phone calls amid their estrangement in the midst of June’s sobriety journey.

“Now all I need to just like, see the kids,” June said, insisting it was important for her to reconnect with her children.