Mamata to contest from Nandigram, take BJP head on 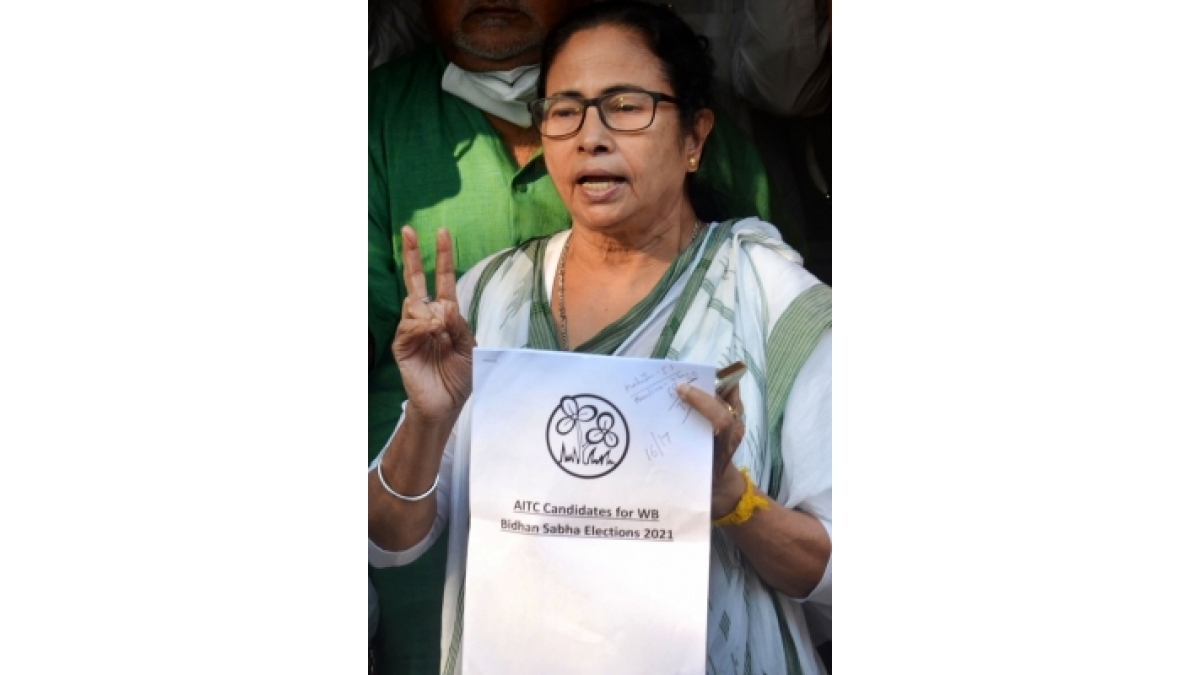 The party has left three seats for a Gorkha party in Darjeeling.

“I will only contest from Nandigram,” Banerjee’s message was unambiguous and loud, hinting that the popular leader never shies away from a challenge and loves a head-on confrontation.

When Banerjee took everyone by surprise by declaring her intent to contest from Nandigram during a rally there two months ago, a battery of BJP leaders had ridiculed the proposed move.

Some said she would contest from both her traditional constituency of Bhowanipore and Nandigram, just in case she loses the conflict-scarred East Midnapore seat.

Others like former lieutenant turned BJP national vice-president Mukul Roy had that predicted Banerjee will “quietly slip back” to her comfort zone in Bhowanipore.

Suvendu Adhikari, once confidante turned BJP leader, has challenged Banerjee to fight from Nandigram ‘only if she was prepared to lose by a margin of atleast ‘50,000 votes’.

RELATED:  Father of a minor involved in road accident arrested

Why did she take such a risk? “Lorai e bhoy pai na bhai, Loraier math theke ami palai na, (I am not afraid of a fight, I never run away from the battlefield),” she said.

Analysts, however, dismissed suggestions that Banerjee’s move is hasty, taken on the spur-of-the-moment.

“This is a calculated move. Her margin in Bhowanipore has come down over the years as the large non-Bengali electorate in the area has increasingly turned to the BJP. By fighting from Nandigram, she wants to revive the memory of the epic land struggle and deny that legacy to the Adhikari clan. That may swing East and West Midnapore towards Trinamul and limit the damage caused by Adhikari’s defection,” said political commentator Sukhoranjan Dasgupta.

Adhikari’s defection had rattled Mamata Banerjee and raised the spectre of a BJP surge in the two Midnapore districts which have 35 seats in the 294-strong state Assembly.

“Banerjee fighting from Nandigram can limit the damage in the Midnapore region. She is the only one in the party who can counter the Adhikari factor. So it is a desperate throw of the dice she had to resort to,” said another analyst, Ashis Biswas.

He said Banerjee has made a huge gender statement by contesting a tough battle like Nandigram to swing Bengal’s huge women vote towards her party by projecting a David versus Goliath contest against a male dominated BJP faction, sort of “Ma Kali taking on the demons.”

As many as 35 per cent of Nandigram’s voters are Muslims, while many are from the backward castes and rural poor. So Trinamool think-tanks, including Prashant Kishor, reckon they are likely to support Banerjee rather than well-off Marwaris, Gujaratis and Punjabis or even white collar Bengalis who think her Singur and Nandigram agitations only denied Bengal a tyrst with prospective future industrialisation.

And since the BJP may be forced to field Adhikari from Nandigram now, a victory there may finish the Adhikari stronghold in Midnapore.

With so much at stake , Banerjee has decided to lead from the front, all guns blazing — a calculated image projection based as much on Banerjee’s ‘gut feeling’ and on calculations of her chief political consultant, Kishor.

Banerjee has also lived up to her penchant for star value.

In Behala East, the party is fielding Ratna Chatterjee, the wife of former Bengal minister and Kolkata Mayor Sovan Chatterjee, who had joined the BJP last year with his girlfriend Baisakhi Banerji.