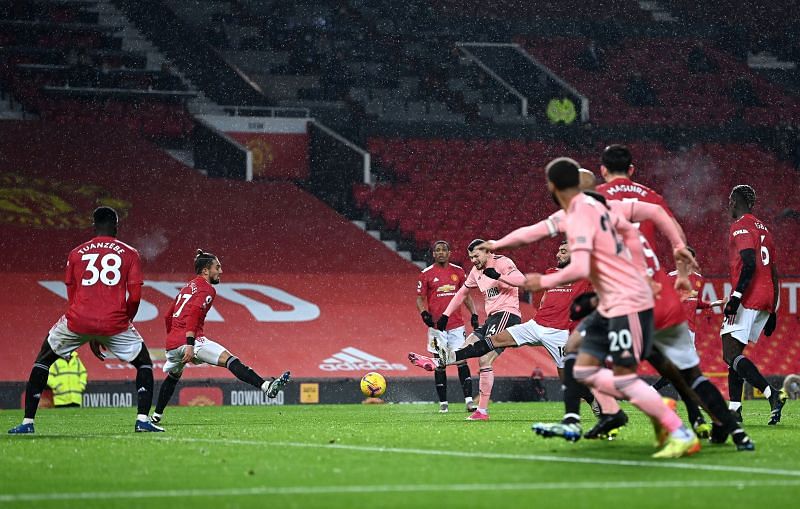 Goals from Kean Bryan and Oliver Burke helped Sheffield United pick up an unlikely 2-1 victory away to Manchester United on Wednesday.

The hosts started on the front foot, with Paul Pogba dominating the midfield. However, they failed to translate their domination into clear-cut chances.

Sheffield United went ahead against the run of play from their first set-piece when a corner kick was not properly dealt with by the Manchester United defence in the 23rd minute.

Kean Bryan rose highest to score his first goal for the Blades and put the side 1-0 up.

This jolted Manchester United into life but despite their possession, they failed to truly test Aaron Ramsdale in the Sheffield goal.

It was more of the same in the second half, but the home side grabbed an equaliser through Harry Maguire, who headed home a corner by Alex Telles.

However, their reprieve lasted for just 10 minutes as a beautiful and patient team effort by Sheffield United was finished by Oliver Burke, who smashed into the Manchester United post off a deflection by Axel Tuanzebe.

Despite late pressure from the hosts, the visitors produced a resolute defensive display to ensure that they went back to Bramall Lane with all three points.

The defeat sees Manchester United remain in second spot and here, we shall have a rundown of five talking points from the fixture.

Ever since Ole Gunnar Solskjaer was appointed manager of Manchester United, the club have lacked the consistency to genuinely compete for the biggest titles.

In many ways, it has been a case of taking two steps forward and three backwards for the Red Devils. This inconsistency has continued into the current campaign.

Having held the initial advantage in their UEFA Champions League group, the Manchester giants faltered and conspired to get eliminated to the Europa League.

This drew shades of previous seasons when they let precious advantages slip from their grasp by their own errors.

The 13-time Premier League champions came into this gameweek holding a slender advantage at the summit, but Manchester City’s emphatic win over West Brom swung the pendulum back in favour of Guardiola’s men.

A victory for United over the basement boys would have seen them reclaim top spot. However, they fluffed their lines and fell to a defeat against an out-of-sorts Sheffield United.

The Red Devils came into this game on a 13-game unbeaten run – the longest in the league – and they were expected to obliterate a Sheffield side that had picked up just five points from their opening 19 games.

However, the result went against the form book and run of play. Most worryingly for fans of the club, it was not entirely surprising.

This defeat follows a set theme, and if the Red Devils are to reclaim their pride of place at the summit, they must eliminate this propensity for dropping unnecessary points.

As already indicated, the Blades came into this game having registered just one win from their first 19 games.

They were 14 points from safety and at the midway stage, they are already everybody’s favourite for relegation to the Championship.

Considering the difference in form and pedigree of both sides, few would have given Sheffield United any chance against the in-form Manchester United.

However, a dogged defensive display, coupled with clinicality in front of goal, ensured that they registered an improbable victory against the Red Devils.

Despite the points, Chris Wilder’s men are still a long way off from safety. However, this victory could prove to be a shot in the arm for an unlikely escape.