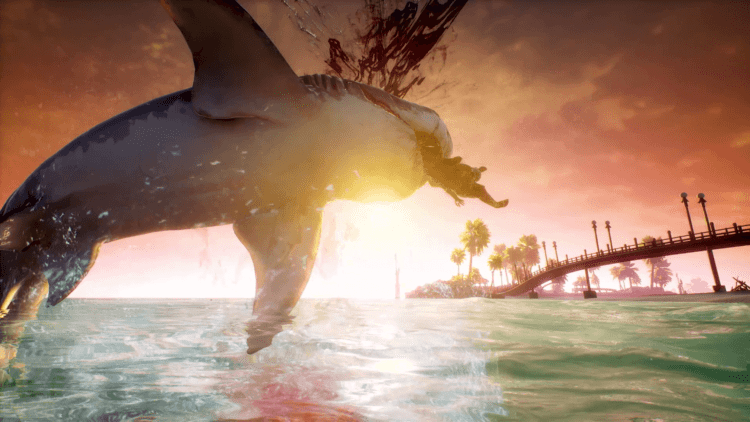 After a shark-infested season of discontent, residents of the bustling seaside town, Port Clovis, may have thought it safe to go back in the water but it’s time to show them just how wrong they are. Tripwire Interactive’s 2020 cult hit, Maneater, is back with the “Truth Quest” DLC featuring new evolutions, enemies and explorable regions. With so much to hunt, you’ll hardly have time to stop and smell the blood in the water.

Maneater: Truth Quest picks up where the original game left off — with our fearless bull shark protagonist swimming the high seas after dispatching its nemesis, Scaly Pete, the nefarious hunter who killed its mother. However, the bone armor defenses, not to mention the toxic and electrical attacks that players gained during the initial campaign, have attracted the attention of conspiracy theorists from around the world, including acutely unhinged YouTube star, Trip Westhaven. As he sets his sights — and followers — on the waters around Port Clovis, you’ll have to do what bull sharks do best: eat your way to the top of the food chain.

In Truth Quest, your shark will grow even more enormous than ever before thanks to a bump in the level cap from 30 to 40. Five new organ evolutions and one additional organ slot becoming available once you max out again. You’ll need every ounce of mass you can pack on when facing down new prey species and even more dangerous “uber” apex enemies. Threats will come from above the waves as well. Hunters from the Naval Wildlife Organization (NWO) won’t just come at you from surface ships anymore, they’ll now lob attacks from the presumed safety of beaches and fortifications while tracking your movements with helicopters. What’s more, five new Bounty Bosses patrol the coastal waters armed with increasingly deadly weapons and vehicles.

But the new DLC isn’t just about noshing on anything dumb enough to come within striking distance. You’ll also have two new regions to explore as well as a pair of new challenge types to conquer — Failure to Communicate, which requires you to tail-whip objects at target objectives, and Time Trial, which is exactly what it sounds like.

Truth Quest is currently available to download for the PS4, PS5, Xbox One, and Xbox Series X|S. It retails for $14.99, though you will need to already own the original game in order to play through the new content.