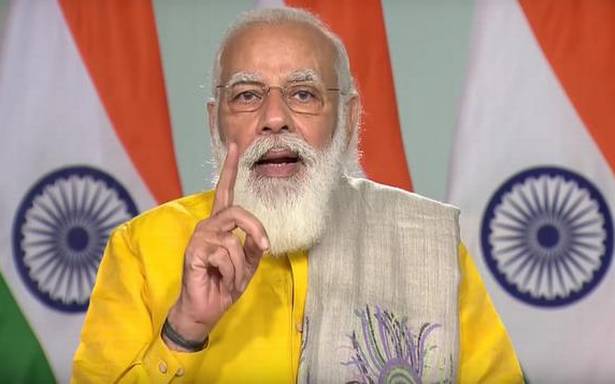 These reforms have not only served to unshackle our farmer, says Narendra Modi in Mann ki Baat

Prime Minister Narendra Modi on Sunday said the demands raised by farmers over the years had been met in the form of the recent agriculture reforms that have given them new opportunities.

In his Mann ki Baat radio address, Mr. Modi said all political parties had been making promises to the farmers but now these promises had been fulfilled. The Prime Minister’s address came at the end of a week marked by protests by farmers in Punjab, Haryana and Delhi against the four farm Bills passed by Parliament in September.

“The agricultural reforms in the past few days have also now opened new doors of possibilities for our farmers…These reforms have not only served to unshackle our farmers but also given them new rights and opportunities,” Mr. Modi said.

He cited the example of a farmer from Dhule in Maharashtra, Jitendra Bhoiji, whose payments for his corn crop was kept pending by traders for four months.

“In this situation, the new farm laws that were passed in September came to his aid. Under this law, it was decided that all dues of the farmers should be cleared within three days of procurement, failing which, the farmer can lodge a complaint,” Mr. Modi said.

The farmer was able to lodge a complaint and get his pending dues cleared within days, the Prime Minister said.

“Whichever the field, correct knowledge, free from misconceptions and rumours can act as a force multiplier for every individual,” he said.

The Prime Minister cited the example of the CEO of a farmer producer organisation, Mohammad Aslam, from Baran in Rajasthan, who was spreading awareness among farmers about prices at markets through a WhatsApp group.

“To the youth, especially the lakhs of students who are studying agriculture, it is my request that they visit villages in their vicinity and talk to the farmers and make them aware about innovations in farming and the recent agricultural reforms.” he said.

Earlier in his address, he spoke of the importance of culture in a time of crisis like the COVID-19 pandemic. Mr. Modi said it had been about a year since the first case of COVID-19 was reported.

“Since then, the entire world has seen several ups and downs. Coming out of the lockdown now the discussion on a vaccine has commenced, however, any sort of negligence regarding Corona can be deadly even now. We have to firmly keep fighting against Corona,” he said.

Musi water unfit even for agriculture

SWOT for Hrithik Roshan: Identifying the Strength, Weakness, Opportunities and Threats for HR