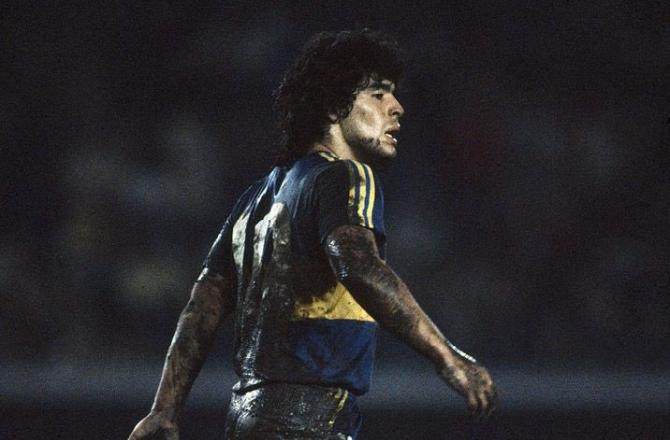 Argentinian football legend Diego Maradona is no more. The 60-year-old passed away at his home in Tigre after suffering a cardiac arrest. The footballer had recently battled health issues and underwent emergency surgery for a subdural haematoma several weeks ago.

Several Bollywood and Hollywood celebrities mourned the loss of the football legend Diego Maradona. They paid rich tributes to the ‘greatest of all time’

Riteish Deshmukh mourned the loss of the footballer by sharing a vintage picture on his Twitter handle. “This image says it all. GOAT #Maradona Rest In Glory..(sic)”, he tweeted. Take a look:

This image says it all. GOAT #Maradona Rest In Glory …. pic.twitter.com/1FQSvN3tVD

Actress Urmila Matondkar expressed grief on Maradona’s death. She posted a picture of him on her Twitter handle and wrote:

British filmmaker Asif Kapadia, who had last year made a film on Argentine football legend titled Diego Maradona, was still in shock as he posted this:

Cant quite believe DM has gone. Hard to process. He always seemed indestructible. I had 10 hours with the man!! I touched his left foot. We did our best to show the world the man, the myth, the fighter he was. The greatest #legend #DiegoMaradona @MaradonaMovie #Diego #maradona pic.twitter.com/4BSULN9rdt

RIP THE GREATEST FOOTBALLER THE WORLD HAS EVER KNOWN . YOUR LEGACY WILL ON. MARADONA THE GREAT #GOAT #Maradona pic.twitter.com/RW197xtavr

Maradona was admitted to the Ipensa clinic in La Plata, south of Buenos Aires, two weeks ago, with what was initially thought to be dehydration and anemia. Later, a blood clot was detected in his brain. Maradona underwent emergency surgery on November 3.

Maradona had begun his professional career with Argentinos Juniors at the age of 16 and he went on to become one of the greatest players to ever play the game of football. The ace footballer represented Boca Juniors, Barcelona, Napoli, Sevilla, and Newell’s Old Boys as a player. Diego was considered the main player in taking Argentina to their second World Cup title in 1986.

Asha Negi Slams Celebrities For Overacting While Getting Vaccination

Ajeeb Daastaans Trailer: Done to death, predictable plot but powerful performances is all you...