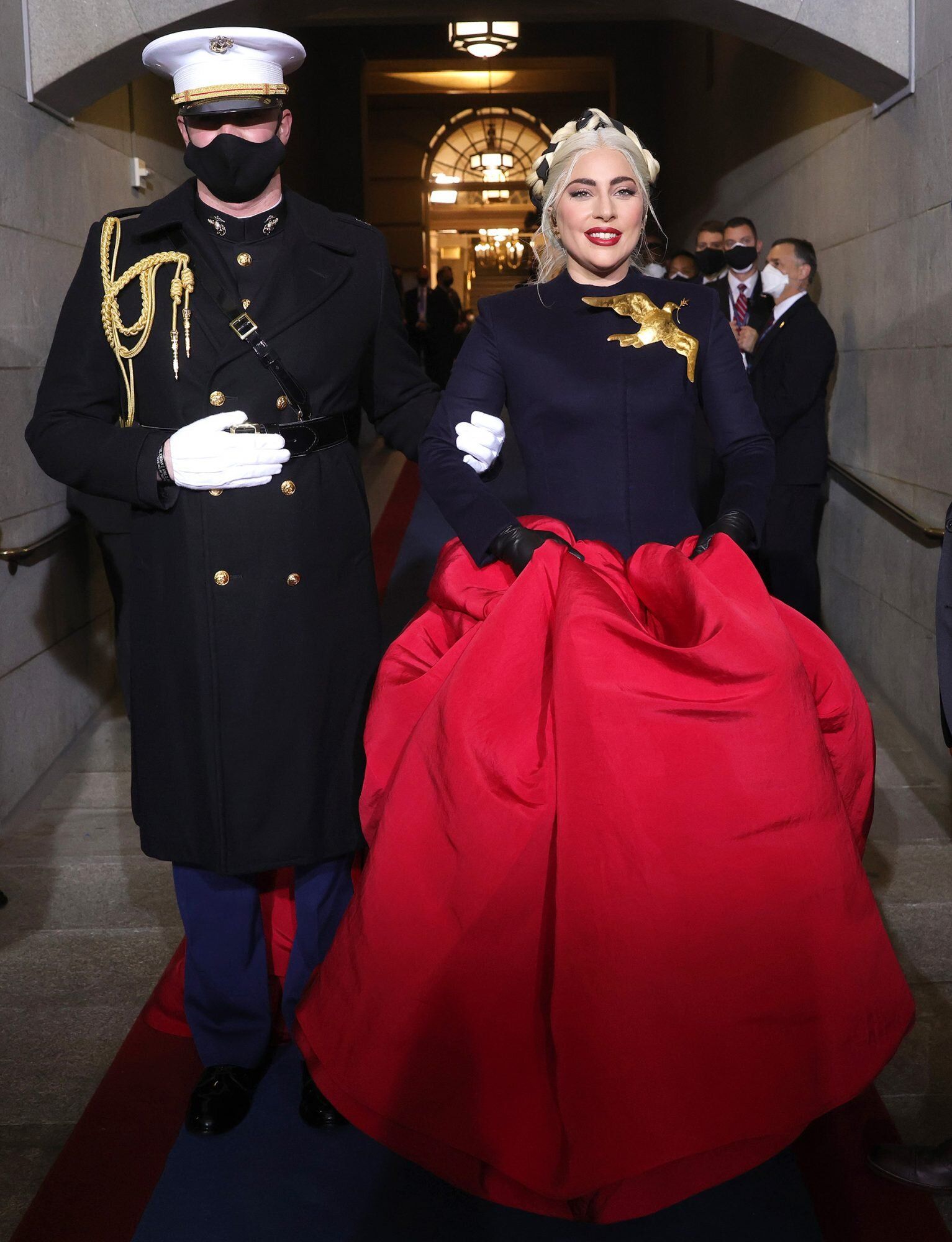 The marine who escorted Lady Gaga ahead of her performance at President Joe Biden’s Jan. 20 inauguration is opening up about both the lighthearted and heartfelt moments while — literally — supporting the pop star just before her delivery of “The Star-Spangled Banner.”

Marine Capt. Evan Campbell was assisting other A-listers to their seats when he was asked to help 34-year-old Gaga, who was dressed in a custom Schiaparelli fitted jacket adorned with a symbolic dove brooch, to the microphone for her performance.

“There was a concern — obviously she was wearing this very beautiful, very large dress — and there was a concern that she might need some help getting down the stairs,” Campbell told Task & Purpose this week. “So they basically looked around and I was one of the taller, larger individuals, and they just asked if I would be willing to assist and I was more than happy to.”

Campbell, 34, told Task & Purpose that he didn’t tell anyone he would be escorting Gaga before it actually happened, saying he “wanted to make sure that I didn’t screw it up before I went hyping it.”

In a separate interview with The Marine Corps Times this week, Campbell said he and the pop star “shared a laugh” ahead of their walk out: “She looked at me and she’s like ‘a fair warning … we have an equal chance of tripping on this.’ “

Sensing that Gaga was nervous, Campbell told Task & Purpose that he reassured her by telling her she would do a great job. She asked if he wanted to pray with her backstage inside the Capitol, in a touching moment that was captured in photos.

Campbell said the way Gaga approached her role struck something in him as well.

“As a person, that was an amazing thing to hear. But as a service member too, the way she prepped to sing the national anthem obviously resonated with me very deeply as someone that’s sworn an oath to defend their country,” he told the Times.

Campbell said the Chromatica singer was “incredibly genuine,” telling him that the day was “the most important day of her life.”

According to Task & Purpose, Campbell — who deployed to Iraq in 2016 and to Syria in 2017 — said he was proud of how he was able to represent the Marines at the inauguration.

“The biggest thing for me is when those memes came out — you know, find someone that looks at you the way she looks at a United States Marines — I took a lot of pride in that,” Campbell told the publication. “I think at the end of the day, we all want to do something that represents the Marine Corps well … people were sending me posts from Vogue Paris, Cosmo, I mean millions of people have now seen a United States Marine with Lady Gaga, so I’m just glad I did the Marine Corps proud on this one.”

RELATED: Lady Gaga Prays Joe Biden Inauguration ‘Will Be a Day of Peace’ and ‘Love’ Ahead of Performance

The pop star and humanitarian recently told PEOPLE performing at Biden’s inauguration was “the honor of my lifetime.”

A day before she performed the national anthem in Washington, D.C., the Oscar-and Grammy-winning star shared a message about her hopes for the historic occasion.

“I pray tomorrow will be a day of peace for all Americans. A day for love, not hatred. A day for acceptance not fear,” she wrote on Instagram, captioning a photo of herself wearing an all-white ensemble in the Capitol rotunda.

Accompanied by the Marine band, Gaga sang “The Star-Spangled Banner” on the west front of the U.S. Capitol for the “America United”-themed ceremony celebrating Biden, 78, and Vice President Kamala Harris, 56.

she wrote on Twitter minutes prior to her performance: “Singing our National Anthem for the American People is my honor. I will sing during a ceremony, a transition, a moment of change — between POTUS 45 and 46. For me, this has great meaning.”