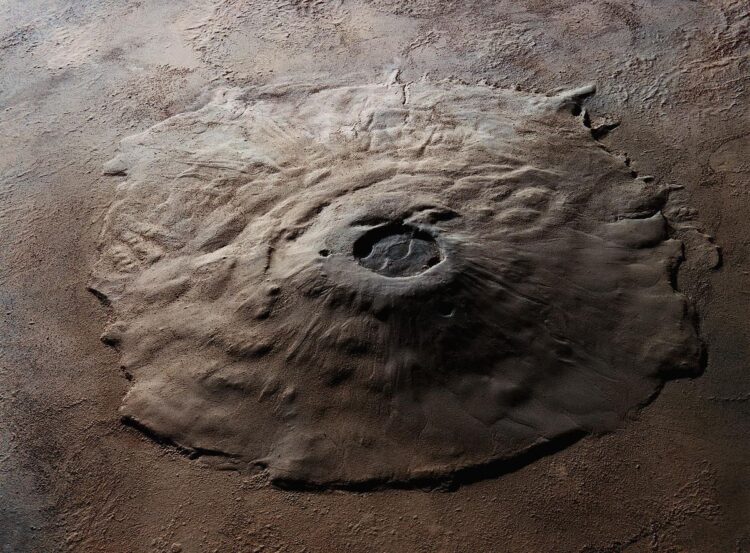 A half century from now, one of Elon Musk’s current space competitors may be running tours to Olympus Mons, our solar system’s largest known volcano. This truly extraordinary landform mass in Mars’ western hemisphere is without compare in terms of its sheer height and mass.

Some 25 km high, or two and a half times the height of Mount Everest, Olympus Mons’ summit caldera is some 3 km deep and measures 80 km across, NASA reports. A shield volcano —- a wide and shallow volcano built up by successive outpourings of very fluid lava, Olympus Mons stretches over an area about equal to the U.S. state of Arizona.

It lies on the northwestern flank of what is known as Mars’ Tharsis Rise, a large volcanic region that covers about a quarter of Mars’ surface. Question is: how did it actually form?

“We’re not sure how or why the Tharsis Rise formed, but we do know that it started to develop at least 3 billion years ago,” Paul Byrne, a planetary geologist at North Carolina State University in Raleigh, told me. But the rise itself is built largely of volcanic material.

The commonly accepted view is that Tharsis lies over a hot spot or superplume similar to the situation with the Hawaiian Islands, Jim Rice, senior scientist at the Lunar and Planetary Institute in Tucson, Ariz., told me.  However, since Mars has no moveable crustal plates (in contrast to Earth), the Tharsis region’s crust didn’t move but stayed stationary over the hot spot. This enabled these volcanoes to grow to such enormous size, Rice says.

Because Mars likely never had any mobile tectonic plates, as here on Earth, when huge plumes of magma rose from deep inside Mars, they remained stationary relative to the surface, says Byrne. With the plume and the overlying surface remaining motionless relative to each other, he says, billions of years of erupted lavas and intruded magmas were able to build up huge volcanic edifices.

“The fact that Olympus Mons is so large is perhaps not that surprising: gravity is lower on Mars than on Earth, so the volcanoes can grow bigger before the crust supporting them fails,” Francis Nimmo, a planetary scientist at the University of California Santa Cruz, told me.  But the devil is in the details.

Researchers agree that the Tharsis region has had prolonged periods of volcanism going as far back to more than 3.5 billion years ago, says Rice.

Some of the very youngest flows within the Tharsis region erupted in the last few million years, says Byrne.

None of NASA’s rovers have gotten near this massive plateau, but this area has been mapped extensively from Mars orbit.

The European Space Agency’s (ESA) Mars Express spacecraft circled this volcanic bulge at altitudes of only 275 to 330 km above the Tharsis volcanic ‘bulge.’ The large mass of the volcanoes even caused tiny ‘wobbles’ in the trajectory of Mars Express as it flew overhead, says ESA.

The Mars Orbiter Laser Altimeter (MOLA) dataset, from the Mars Global Surveyor spacecraft, has helped revolutionize our understanding of Mars, says Byrne. The MOLA dataset is a global topographic map, allowing us to quantify where the topography is high, where it is low, and to hypothesize why the surface looks the way it does, he says.

The HiRise camera on NASA’s Mars Reconnaissance Orbiter gave us close-up images to understand the details of the lava flows and tectonics, says Nimmo.

As for the lavas that spewed forth from these large Martian volcanoes?

The lavas probably weren’t all that different to those that make up the Hawaiian island volcanoes, says Byrne.  There was just more of them, and they erupted over much, much longer timescales than on Earth, hence the bigger volcanoes, he says.

What should we be doing to better understand the Tharsis Plateau and its volcanoes?

Ultimately, seismic measurements from that region, taken on the surface, will help tell us what the present state of the subsurface of Tharsis is like, and whether there is active molten processes taking place there today, says Byrne.

At some point in the future, it would also help to have a geophysics (seismic, heat flow) network in the region as that would allow researchers to learn much more, especially the subsurface plumbing of these volcanoes, says Rice. Then, if we also had samples, we could very accurately date the various lava flows and get absolute ages for the eruptions like we do on Earth, he says.

What’s most puzzling about this region?

The most interesting thing to me about Tharsis is why the three so-called Tharsis Montes—Ascraeus, Pavonis, and Ascraeus Montes—are arranged in a line, says Byrne. There must be a very old and very deep structure in the Martian lithosphere (the brittle, outer layer of the planet) along which magma rose to form those volcanoes, he says.

However, Rice wonders how this region’s eruptions over the eons affected Mars’ climate. He specifically wonders if these eruptions affected the climate enough to allow lakes and oceans to form and whether these volcanoes were all erupting at approximately the same time.

As for when astronauts will actually visit the region?

The Tharsis region is not very high on the list of candidate landing sites, says Rice. And adventure astronaut tourism is a long ways off, but maybe one day, he says.