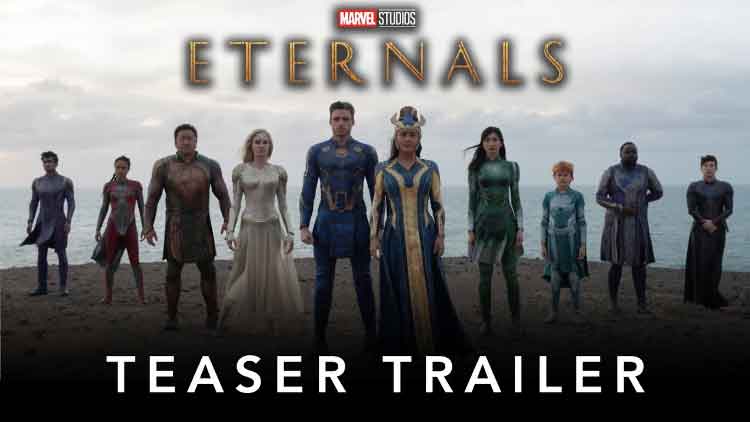 Once again, Marvel is coming back with its  ‘Eternals’, an American Superhero film to hit the screens on November 5, 2021, in the United States. You can watch the trailer of the movie on YouTube.

‘Eternals’ is an upcoming American superhero film based on Marvel Comics which is produced by Marvel Studios and distributed by Walt Disney Studio Motion pictures. The budget of the movie is $200 million.

The film was directed by Chloe Zhao who also wrote the screenplay with the other artists. As we know Chloe Zhao is an amazing and very talented director. Her debut feature film was ‘Songs My Brothers Taught Me’ (2015) and the second film was  ‘Rider’ (2017). Recently, Zhao gained huge success with ‘Nomadland’ (2020) which won many awards.

‘Eternals’ film is intended to be the 26th film in the Marvel Cinematic Universe (MCU). In the Film, after the return of half of the population in ‘Avengers: End Game’ignites, the “emergence” is the  ‘Eternals’ who are an immortal alien race created by the celestials.

These celestials have secretly lived on earth for over 7000 years and now they reunite to protect humanity from their evil counterparts, the Deviants. The Deviants are a fictional race of humanoids appearing in American Comic books published by Marvel comics.

‘Eternals’ stars the cast including –

Sersi – An empathetic Eternal with a strong connection to humans and the Earth, who can manipulate inanimate matter.

Ikaris – One of the most powerful Eternals who can fly and project cosmic energy beams from his eyes.

Kingo – An  Eternal who can project cosmic energy projectiles from his hands.

Sprite – An Eternal who can project life like illusions.

Phastos – An Eternal who is an intelligent weapons and technology inventor.

Makkari – An Eternal who possesses the power of Super – Speed.

Druig – An Eternal who can manipulate the mind of others

Gilgamesh – The strongest eternal, with a deep connection to Thena (one of the Eternals)

Ajak – The wise and spiritual leader of the Eternals who has the ability to heal and is the bridge between the Eternals and Celestials.

Thena – An elite warrior Eternal who can form any weapon out of cosmic energy.