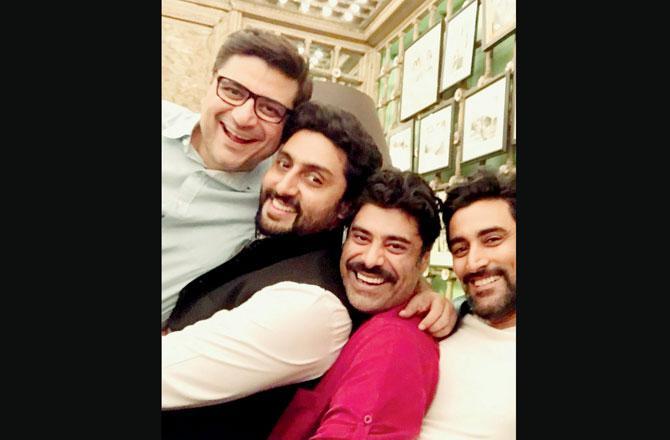 Goldie Behl, Abhishek Bachchan, Sikandar Kher and Kunal Kapoor are part of B-Town’s cool boys gang. Kher shared a picture of the besties and wrote, “Quad(riceps) at work.” Though he did not specify what the foursome was planning, the thought of them teaming up sounds fun. Behl and Bachchan are childhood buddies, who often accompanied their fathers, filmmaker Ramesh Behl and Amitabh Bachchan, on the set of their films.

Junior B considers Kher “a baby brother, who is crazy, irritating, disgusting, messy,” but he loves him for that. Kapoor is married to Junior B’s cousin, Naina, daughter of Ajitabh Bachchan. When the four get together, they are a riot.

Speaking about Abhishek Bachchan, the actor stunned his fans with the stint in Anurag Basu’s Ludo, an anthology film. The guru actor was seen sharing the screen space with Asha Negi for the first time. Abhishek enjoyed working with the television actress and mentioned how different experience it has been. “Congratulations to her for her first film and I welcome her to the world of films. Obviously, Asha is somebody who has garnered huge recognition and reputation in the Television industry and it was wonderful to work with her.”

Abhishek Bachchan will be next seen in Bob Biswas, which is directed by Diya Annapurna Ghosh. The film also stars Chitrangda Singh and Amar Upadhyay.

Speaking of Sikander Kher, he was last seen in web series Aarya, along with Sushmita Sen. Kher who previously starred in 24 (2016) notes that the audience’s response towards shows has changed in the past few years. “Had 24 released now, it probably would have been received better. Abhinay Deo [director] had made a brilliant show.”

Well, we can’t wait for them to team up for a project.

Also Read: Abhishek Bachchan discusses Bob Biswas: If you look the part, half your job is done