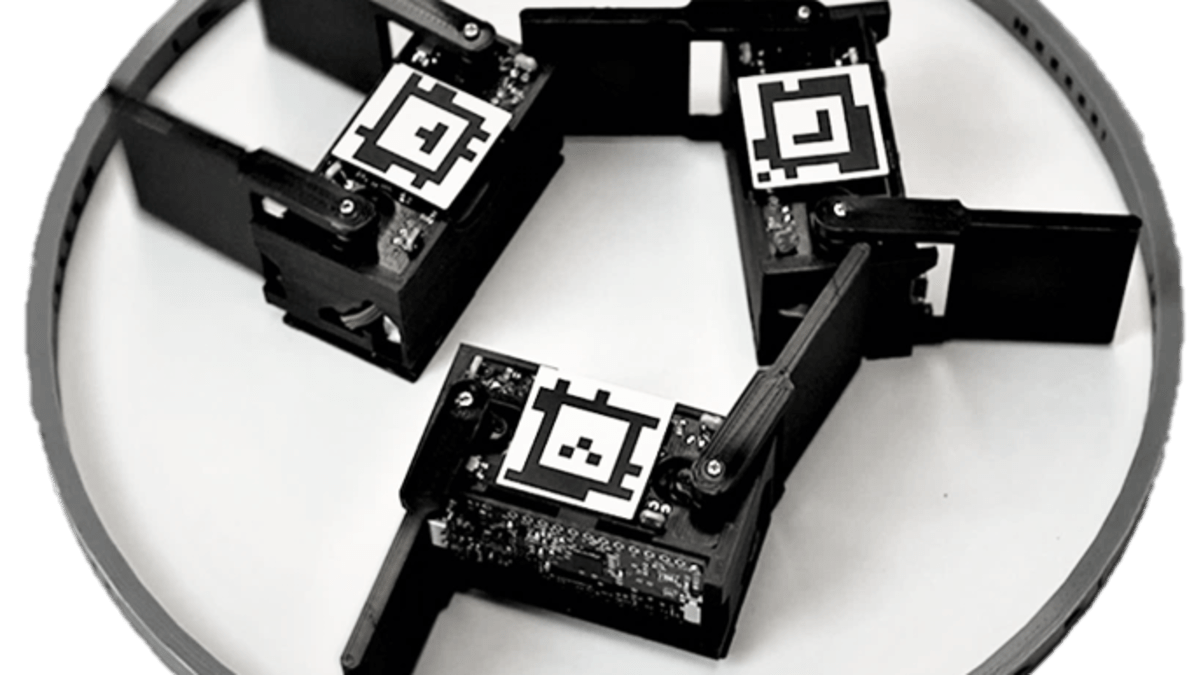 In January 2020, a second-floor lab at Northwestern University was filled with the mild-mannered clacking of three robots pushing each other around. The trio were in a small ring as they hit against one another, though the petite robots weren’t the rock ‘em, sock ‘em variety. These were smart, active particles—“smarticles”—outfitted with two paddle-like flaps for arms, spanning less than 6 inches across from end-to-end, and topped with tags to track their position and orientation. The little buggers were going through the unpredictable and unflattering motions of disorder until, now and again, they gracefully transitioned into recognizably coordinated movements: a dance.

The smarticles were not programmed with particular instructions, nor told to make nice with one another. The bots were prescribed drives, or patterns of motion for their flaps, which surprisingly gave way to dance-like sequences. The patterns, and the physics undergirding them, are described in a paper published today in the journal Science. The research was funded by the National Science Foundation, the James S. McDonnell Foundation, and the Army Research Office.

When the smarticles weren’t synchronized, there was a “chaos of flapping and collisions all around the ring, which were mesmerizing to watch, but certainly not orderly,” said Thomas Berrueta, a roboticist at Northwestern University and co-author of the paper, in a video call. But teaming up with Pavel Chvykov, a physicist at the Massachusetts Institute of Technology, and Jeremy England, a physicist previously at MIT and now at Georgia Tech, the research team programmed the smarticles to perform the driving pattern at the same time.

“All of a sudden, they were doing this beautiful rotational procession,” Berrueta said. “As someone who had smarticles and didn’t have them do that before, it felt like [Chvykov] came and did a magic trick with my own tools.”

Order is in many places in the natural world—bird flocking, for example, or water crystallizing into ice—but predicting it is a beast in non-equilibrium settings, where there are external forces at play. (And to be clear, the world of non-equilibrium is the big, wide one outside your window—a vast realm compared to the feats achievable in a predictable lab setting). In the 1870s, a Swiss physicist named Charles Soret conducted experiments that showed how a salt solution in a tube exposed to heat on one side would cause greater order of the particles on the colder side. Because molecules move around more violently on the hot side of the tube, more of them end up traveling into the cooler side; the cooler molecules, with their dainty movements, don’t end up traveling as far as quickly. What this means is that the particles end up accumulating on the cool side of the tube. The principle, called thermophoresis, was a model for England and Chvykov in seeing the promise of objects in so-called low-rattling states.

“The idea is that if your matter and energy source allow for the possibility of a low-rattling state, the system will randomly rearrange until it finds that state and then gets stuck there,” England said in a statement from Georgia Tech. “If you supply energy through forces with a particular pattern, this means the selected state will discover a way for the matter to move that finely matches that pattern.”

In this case, the pattern was the prescribed flap motion, and the matter moving to match that pattern were the bots slapping each other in rotations and translations about the ring that enclosed them. These little flappers were a great testing ground for the idea that low-rattling states would give rise to stable, self-organized dances. Unlike other muses, the smarticles didn’t have a molecular source of self-ordering behavior (like how water turns to ice at a certain temperature). The other variables at play in crystals give way to alternative explanations for ordering, clouding the low-rattling idea the research team wanted to test.

Since the smarticles only move through contact with one another (they can’t take steps or roll around), there are also fewer unknowns about where the objects’ mobility is coming from, England said, a problem you would have if all the smarticles had little engines propelling them in their dance. When the robots can only move by pushing each other around, you know the motion you’re seeing is the result of a collective behavior.

“This paper suggests a general principle that complex systems naturally gravitate towards behavior that minimizes ‘rattling,’” Arvind Murugan, a physicist at the University of Chicago who is unaffiliated with the recent paper, said in an email. “The current application to robots shows that the idea survives its first contact with reality. But future work will have to show if this principle is a good approximation for other complex systems—from molecules to cells to human crowds at a rock concert (post COVID, of course).”

Murugan adds that the principle is not always true, “and only approximately true when it is true.” But the idea as performed by the bots shows that, given that driving force, in a low-rattling state they will dance.

“As soon as you have a bunch of robots that are interacting with each other and interacting with people… the idea in this paper is that they’re going to be synchronized some of the time. And when they synchronize, there’s going to be emergent behavior, but that you can’t necessarily know what that emergent behavior is going to be,” said Todd Murphey, a roboticist at Northwestern University and co-author of the paper. “If we are unwilling to talk about emergent behavior as a fundamental outcome that we should always be expecting for a sufficiently complex system that’s in non-equilibrium, then we’re going to miss things that can reasonably happen.”

The implications of the robotic movements go beyond refining your DDR technique. Though just three dinky contraptions in rotation, the smarticles displayed a principle that could be applied to self-driving cars or even the humans inside them.