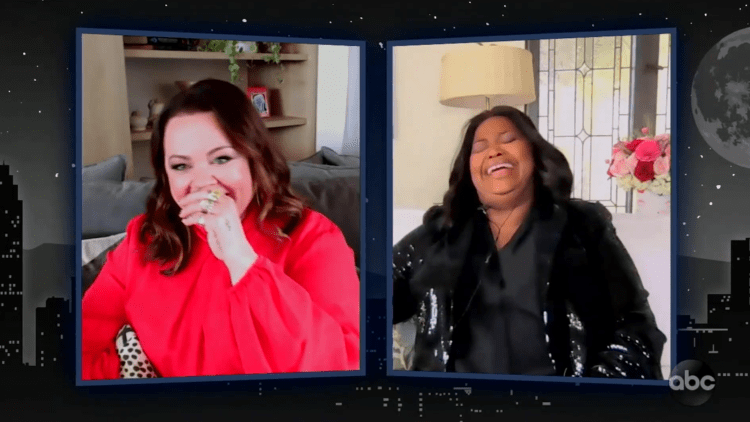 and appeared on Thursday to promote their new movie , in which the two play a pair of superheroes with a sweet ride, and McCarthy revealed the prank she couldn’t help playing on her longtime friend.

In the movie, their superhero ride is a purple Lamborghini, which posed its own set of issues even before McCarthy decided to pull the prank. In fact, it was those issues that inspired the prank.

“Neither one of us has ever been in a Lamborghini, so when we finally went to jump in and peel out in it, we realized, it’s like 3 1/2 inches off the ground,” McCarthy said, “and you have to go in on an angle, like you have to stiffen your body and go in like a corpse. It’s crazy.”

So McCarthy got the crew to help her pull it off.

“When we were shooting it for the first time, I had the transpo guys lower her seat even more,” McCarthy said. “So it’s literally—like she’s trying to get in, in her super suit, and it’s like a quarter of an inch off the ground, but she’s got to lay back while she slides in. And then she couldn’t get out.”

And the plan worked like a charm. They showed a clip of Spencer needing help getting out of the car after shooting. McCarthy immediately fessed up and Spencer let out a big laugh.

Earlier in the interview, Spencer told that she sometimes has dinner with McCarthy’s parents even when McCarthy isn’t there, which gave Kimmel a terrible idea for retribution.

“Maybe you seduce Melissa’s father when you’re over at the house and destroy her parents’ marriage, you know?” Kimmel said. “That could be fun.” Spencer responded with a resounding, “No!”

Check out which old characters returned to Grey’s Anatomy and made fans flip out: