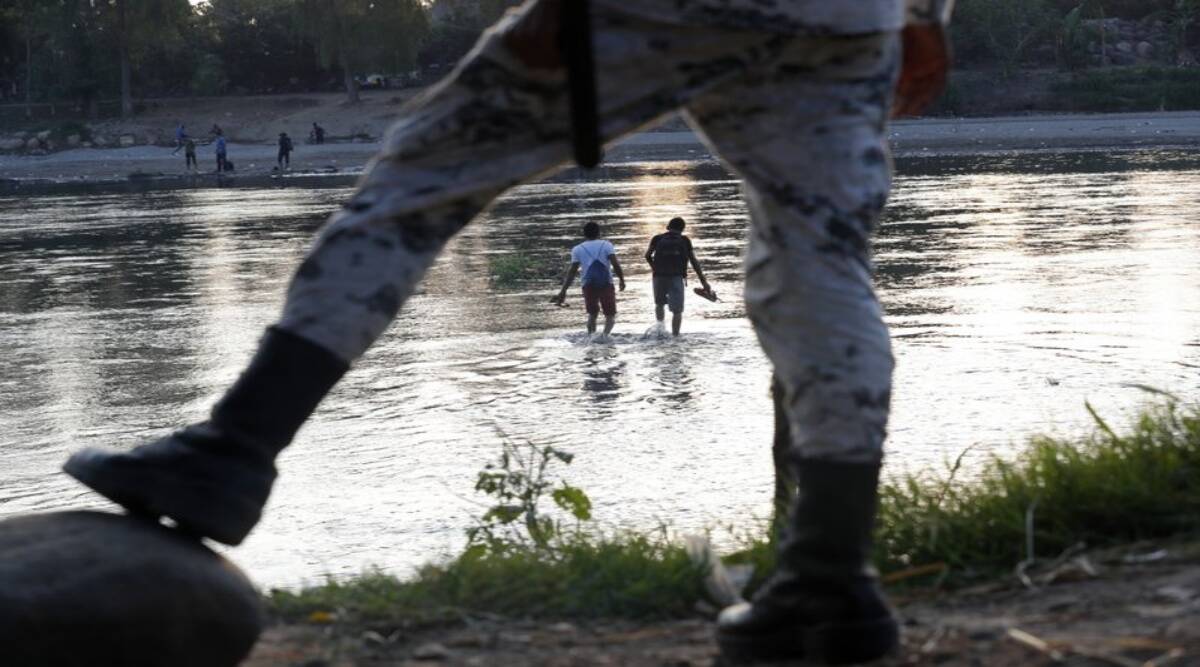 In this Jan. 22, 2020, Honduran migrants who tried to enter Mexico on foot return to the Guatemalan side of the Suchiate River under the watch of a Mexican National Guard near Ciudad Hidalgo, Mexico. (AP Photo/Marco Ugarte, File)

Mexico has sent National Guard officers and immigration agents to the southern border with Guatemala to prevent migrant caravans from entering Mexico and detain those who do manage to cross.

“We have protected migrants, there have been no violations of their human rights,” López Obrador said. “Now they are registered, they are protected, so that they don’t come in through the south, so they don’t become victims of criminals.”

López Obrador denied that the US government had pressured Mexico to impose the restrictions, including the ‘Remain in Mexico’ policy on asylum seekers. Formally known as the Migrant Protection Protocols, the policy sends asylum seekers from other countries back to Mexico while they await court dates on their US requests.

“It was our own decision, that we made, foreign governments do not impose anything on us,” the president said.

Asked what would be the future of the program — which has left largely Central American migrants huddled in improvised camps in some Mexican border cities — López Obrador said “we will wait until Mr. Biden arrives, until he takes office.”

US President-elect Joe Biden has pledged to end many of Trump’s immigration policies, starting with the Migrant Protection Protocols.

In fact, Trump at one point threatened to slap tariffs on Mexican products unless López Obrador’s government cracked down on the flow of migrants heading to the US.

López Obrador’s willingness to assume ownership of the immigration policies despite evidence of US pressure reflects his nationalist stance on most issues; he has made defending Mexico’s sovereignty a central issue.

One of López Obrador’s greatest fears is a possible repeat of the 2010 massacre of 72 migrants by a drug cartel in the northern state of Tamaulipas. Because migrants frequently use cartel-allied immigrant smugglers or pass through cartel turf, blocking their flow through Mexico reduces the chance of another such massacre.

While there is widespread sympathy for migrants in Mexico, domestic support for them crossing Mexican territory is weak, especially during the coronavirus pandemic or if mass movements of migrants threaten to complicate legal border crossings for Mexicans.