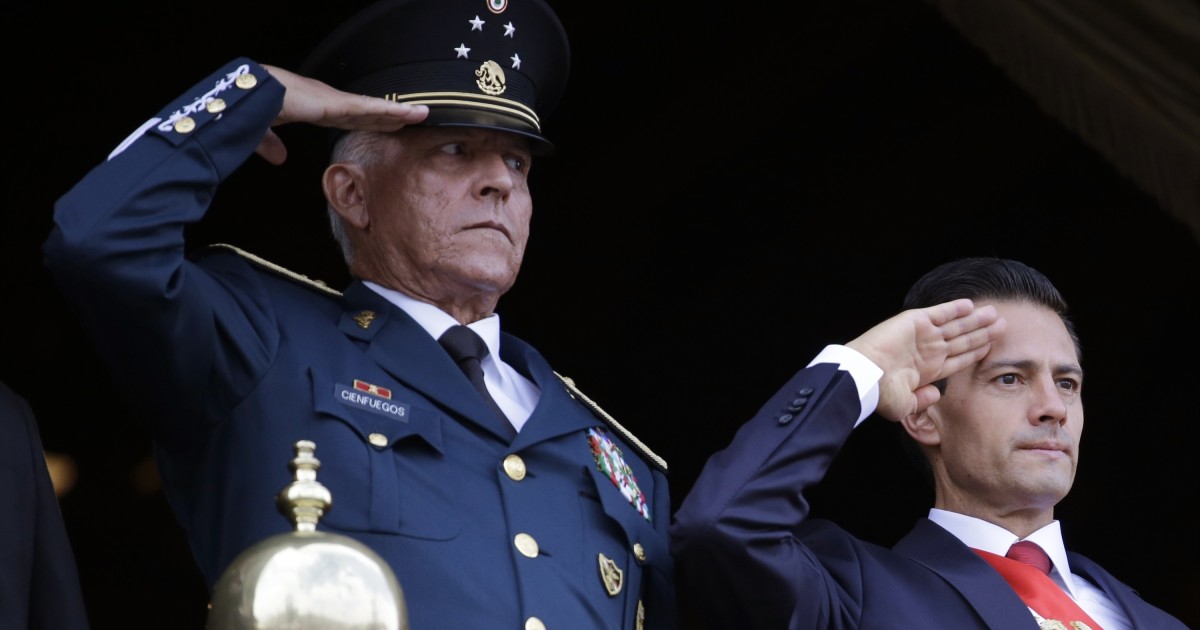 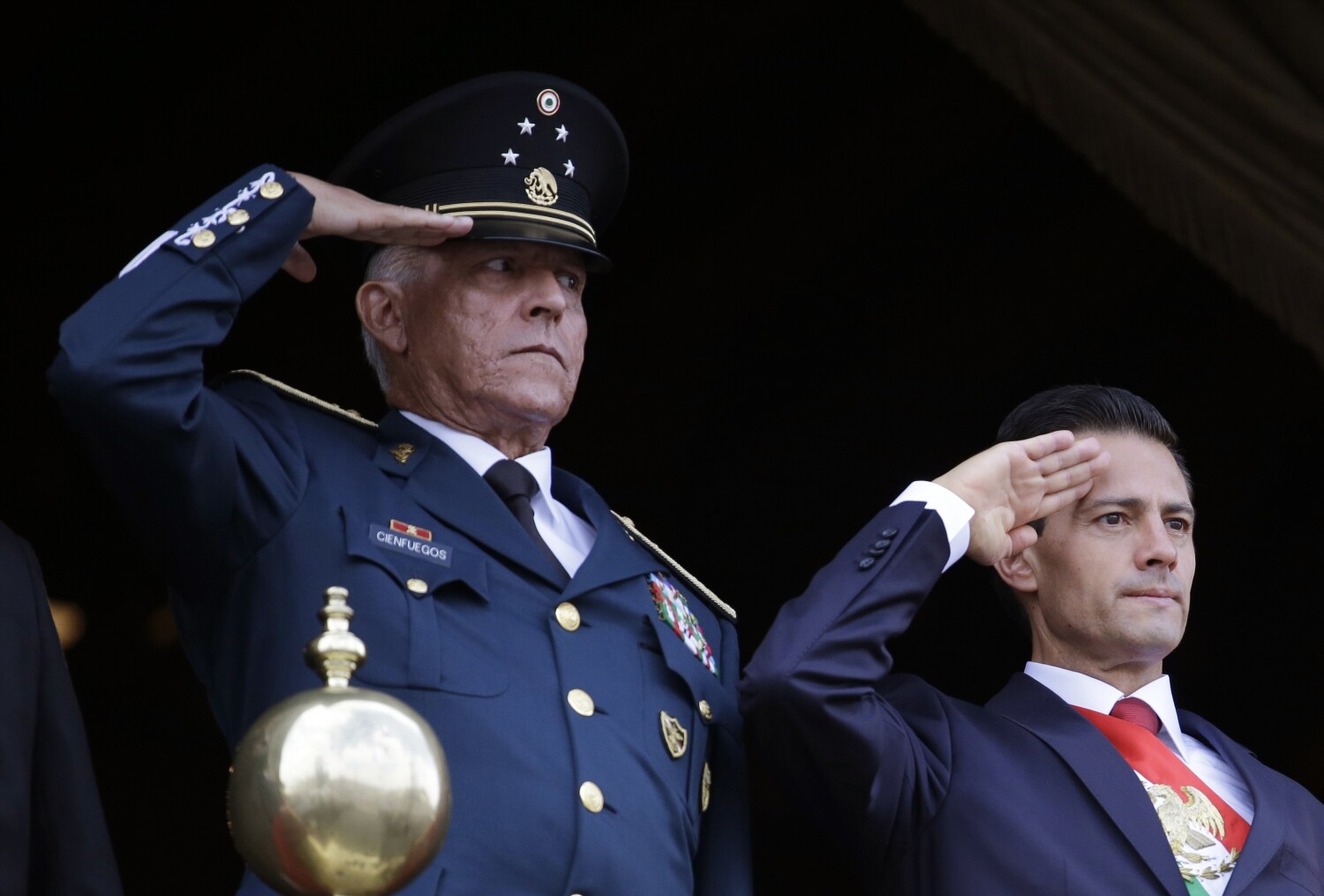 A former Mexican defense minister who was arrested at Los Angeles International Airport last year on a U.S. drug-smuggling indictment and later returned to Mexico for possible prosecution will not face any charges here, authorities here said Thursday.

The Mexican attorney general’s office said it had found no proof to sustain U.S. allegations against retired Gen. Salvador Cienfuegos Zepeda, 72, who served as defense chief from 2012 to 2018 in the administration of ex-President Enrique Peña Nieto.

The decision appears to be the conclusion of an extraordinary case in which the government of Mexican President Andrés Manuel López Obrador — facing intense push-back from the military — successfully pressured the Trump administration to drop charges against the ex-defense chief and return him to Mexico.

The legal vindication of Cienfuegos immediately sparked a social media firestorm from critics who said the decision exposed the hypocrisy of López Obrador’s signature vow to wipe out long-entrenched corruption and end official impunity in Mexico.

López Obrador, a center-left populist, won a landslide election in 2018 inveighing against the “mafia of power,” his scathing depiction of an elite class that controls the country’s wealth and politics and stands above the law.

“Adiós to the discourse against corruption,” tweeted Julio Hernández, a columnist with La Jornada newspaper, following the government’s announcement that Cienfuegos was cleared of any charges.

The move not to prosecute Cienfuegos also seemed to validate the skepticism of many commentators who expressed doubts that he would ever face justice in Mexico.

The decision, detractors said, also highlighted an alarming trend — the growing power of the military in Mexico, where, unlike in many Latin American nations, the armed forces have historically maintained a subordinate role to the civilian government.

But López Obrador has increasingly turned to the military — which has been implicated in various human rights abuses in drug enforcement — to carry out his far-reaching agenda, including matters of law enforcement, infrastructure improvement, immigration regulation and even distribution of vaccines against Covid-19.

“The exoneration of Salvador Cienfuegos demonstrates that the armed forces are untouchable … [and] will continue to be outside of democratic scrutiny,” tweeted Denise Dresser, a columnist for Reforma newspaper. “They are the ones who govern, in reality, and have been converted into the new mafia of power.”

Reports here indicate that the military brass pushed López Obrador to convince the United States to spring Cienfuegos. Some have speculated that military officers feared that Cienfuegos could be flipped by U.S. prosecutors and testify against corrupt Mexican commanders still on duty. López Obrador has rejected assertions that the case exposed widespread corruption in the military ranks.

Mexico’s exoneration of Cienfuegos flies in the face of a multiyear U.S. Drug Enforcement Administration investigation based in part on thousands of intercepted Blackberry communications allegedly implicating Cienfuegos. U.S. prosecutors charged that Cienfuegos, in corrupt dealings with a Mexican cartel, was known among his confederates as “El Padrino,” or The Godfather.

“The evidence against Cienfuegos was very strong, and for Mexico to say that there was no evidence is just pure nonsense,” said Mike Vigil, retired former head of DEA international operations. “This is a stain on Mexico’s judicial system, and it shows that certain people with power can operate with impunity and in total violation of the rule of law.”

Cienfuegos was arrested at LAX on Oct. 15 and accused of being a key cartel operative who, in exchange for bribes, helped facilitate the smuggling of “thousands of kilograms of cocaine, heroin, methamphetamines and marijuana into the United States,” according to court papers filed along with his indictment. He was also accused of tipping off cartel accomplices to U.S. law enforcement actions.

If convicted, he could have faced life in U.S. prison.

Cienfuegos pleaded not guilty and, after five weeks in U.S. custody, was returned to Mexico a free man under what officials here called an unprecedented binational deal.

U.S. prosecutors agreed to drop all charges against Cienfuegos, stating that “sensitive and important foreign policy considerations outweigh the government’s interest in the prosecution of the defendant,” as U.S. authorities told the U.S. District Court in New York.

But the Mexican attorney general’s office ultimately concluded that evidence was lacking.

The government of López Obrador — who developed a friendly relationship with President Trump — exerted its influence with Washington in a bid to get Cienfuegos freed. Marcelo Ebrard, the Mexican foreign minister, acknowledged speaking to former U.S. Atty. Gen. William Barr about the case.

In a thinly veiled threat, Mexican officials suggested that a U.S. prosecution of the ex-defense chief could lead to reduced Mexican cooperation with U.S. drug agents and other law enforcement operatives in Mexico. About 50 DEA agents are stationed in Mexico, Ebrard noted.

Cienfuegos, a more than 50-year veteran of the Mexican military, was flown back to Mexico in the company of U.S. Marshalls on Nov. 18 and freed. Responding to his return, López Obrador vowed that there would be “impunity for no one,” but added: “At the same time we are not going to allow in any case that crimes be fabricated.”