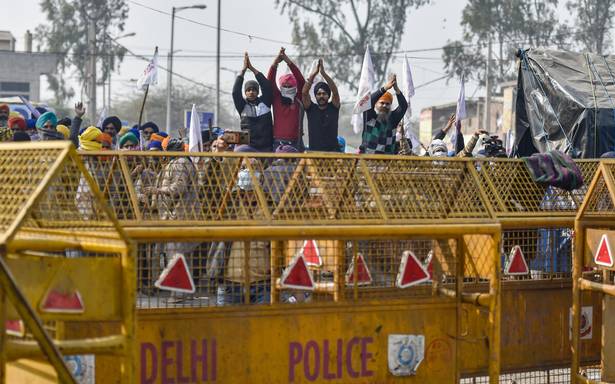 The Ministry of Home Affairs (MHA) ordered the suspension of Internet for two days at Singhu, Ghazipur and Tikri–the three locations bordering Delhi where farmer groups have assembled in large groups to protest against the three farm laws passed by Parliament last September.

The MHA invoked the Temporary Suspension of Telecom Services (Public Emergency or Public Safety Rules 2017) of the Indian Telegraph Act, 1885 to suspend Internet in the three places from 11 p.m. on January 29 to 11 p.m. on January 31.

The emergency provisions were invoked by the MHA on January 26, when some unruly protesters breached the police barricades and vandalised the Red Fort.

Before this, the provision has been issued only twice before- during the anti-CAA protests on December 19 and 20, 2019.

The rules framed in 2017 empower the Union Home Secretary and a State’s Home Secretary to pass directions to suspend the telecom services, including Internet, in an area “due to public emergency or public safety.”

The latest order said, “In the interest of maintaining public safety and averting any public emergency, it is necessary and expedient to order the temporary suspension of Internet in areas of Singhu, Ghazipur and Tikri and their adjoining areas in the NCT of Delhi from 23:00 hours on Januatry 29, 2021 to 23:00 hours on January 31,2021. This has the approval of the Union Home Secretary.”