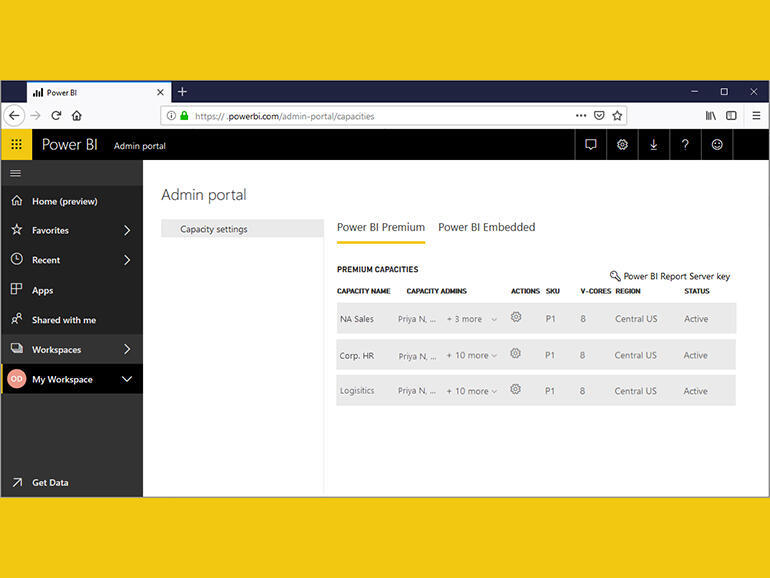 It used to cost $5,000 a month and run on dedicated hardware; now it’s a $20 per user cloud service, which proves that a multi-tenant architecture delivers better performance.

RELATED:  Microsoft asked me if I really, really love Teams. I had to tell the truth | ZDNet

Business intelligence (BI) tools have always offered a very stratified approach to the data that’s supposed to inform decisions across entire organisations. Storing large amounts of data meant having a database that was complicated to manage and access, and running analytics meant working with OLAP cubes and lengthy ETL processes. Both the complexity of the technology and the cost of licensing meant that direct access to the data was limited and usually delayed — when it takes a day to run a report, you can’t have a real-time view of how your business is doing.

The power of Microsoft’s Power BI isn’t just that it offers more visualisations of the data once you get it, alongside the familiar paginated reports from SQL Server Analysis Services made self-service through Azure. It was always about bringing that data to business analysts and decision makers at scale, and giving them what we now call no-code tools to clean up the data and work with it without needing to be a professional data engineer, Arun Ulag, CVP of Microsoft Power BI, told TechRepublic.

“To bring in data at scale and process it with Power BI Data Flows directly on Azure DB, with no code experiences, to be able to analyse unstructured text and images; things like sentiment analysis, key phrase extraction, language detection and image recognition are drag-and-drop no-code experiences built into Power BI.”

Business analysts can build their own OLAP models with terabytes of data, build visualisations and complex analytics, and take advantage of the same kind of versioning, continuous development and lifecycle management for reports that developers use to publish code with Power BI deployment pipelines. “It’s a gorgeous user interface, and it’s designed for the business analysts — these are not professional developers, but they do need to take their projects from dev to test to prod,” Ulag said.

Power BI is still interesting to developers, especially with embedded analytics for building Power BI into their applications, and there’s a new sandbox for them to explore the APIs for doing that.

But the focus of the service is on features that give business users more power. As those new features were built, Microsoft added them to the premium version of Power BI, ending up with a powerful offering — but one that was also very expensive.

“Power BI Premium is sold on a capacity model, so you pay for four cores and once you pay for the cores you can use them for anything you want,” Ulag said. “They could just buy premium cores and they could run all these workloads, and we wouldn’t nickel-and-dime them. We were adding more and more workloads and improving the set of things that would empower business — it allows them to build a full stack, right from the data all the way to building visualisations.”

But while $5,000 a month for a P1 node might be cheaper than separate products for large data models, lifecycle management and automated machine learning (Ulag suggested it’s 25-30% less than equivalent tools), it was still out of reach for a lot of organisations, and for smaller divisions even in large enterprises.

“Data literacy is the primary conversation I have with CXOs,” Ulag noted. “We see this pattern playing out right now, especially in an environment in which things are changing all the time because of COVID; they really want to empower everybody to make every decision with data. We’re seeing a lot of collaboration because Power BI has deep integration into Teams and Excel.” But that means giving data tools to everyone who needs to make or understand decisions.

Power BI Premium was also missing out on one of the important ways that cloud services get adopted in business: enough individual business users putting a service on their credit card and expensing the subscription that the organisation decides to standardise on it.

“97% of the Fortune 500 are already using Power BI because somebody’s already gotten started,” Ulag noted. “Because it’s integrated into Teams, it’s integrated into Excel, it’s so easy to share and collaborate, to start growing virally. When IT is looking at new projects, they say ‘business is already using Power BI, maybe we should just go with what the business wants’.” According to Gartner, Power BI is well on the way to becoming the default choice — “most customers are asking, why not Power BI?”

But that couldn’t happen with the Premium features. There weren’t any trial accounts either, because offering an 8-core node on a free trial isn’t particularly economic.

“Moving to a shared architecture allowed us to use much bigger virtual machines with lots of RAM,” Ulag explained. “Instead of setting aside eight cores each time a new user comes in, we’ll add you to a cluster with all of the shared capacity, but we guarantee that when you need it, you’ll have the capacity that you need.”

Alongside the engineering work, the Power BI team realised that customers had learned one of the fundamental lessons of cloud services.

While dedicated capacity ensures isolation, customers still had to deal with their own other workloads impacting performance. “Customers are buying and using Premium so quickly that they do have ‘noisy neighbour’ problems — it’s just that the neighbours are in their own company,” Ulag said.

The multi-tenant architecture also means organisations don’t have to manage their Power BI infrastructure. “Over the years, customers told us what they valued more is simplified TCO as opposed to complete isolation,” Ulag explained. “We can give them essentially the same degree of confidence that their workloads will run with the capacity that they’ve purchased in a shared infrastructure.”

A data culture that keeps IT in the loop

The new pricing makes more sense of the different levels of Power BI. Authoring is free, and the Power BI Desktop software — which has many of the data analysis tools from Excel and the same experience as using PowerPoint — is free. Power BI Pro offers self-service access to reports for $10 per user per month.

“But if you’re trying to build a full data stack where you bring data in from Azure Data Lake, manage it through local experiences and use Cognitive Services automated machine learning, then you probably need Power BI Premium,” said Ulag.

There’s a 60-day free trial and when it goes GA on April 2, pricing will be $20 per user per month with a one-year commitment. If you already have Power BI Pro (on its own or through an E5 subscription), Premium is an additional $10.

That includes all the Power BI Premium features, with only one constraint: data in memory is restricted to 100GB per user, which Ulag noted is compressed at usually 10 or 20x, unpacking to 1-2TB. “Outside of that you can go crazy. You can prepare as much data as you want, we won’t charge you an extra dime — it’s all in the $20, you can run Cognitive Services all day long, no concerns.” Organisations requiring more than 100GB can take a Premium P2 node with 400GB of in-memory data, which can compress 4-8TB.

Some current Power BI Premium users will shift to the per-user plan, but Ulag expects it to mostly bring in new users in workgroups, smaller departments and SMBs — especially if they’re already using some Power BI tools.

“The pattern we see is that Power BI Desktop is everywhere, and then folks are saying ‘we want to empower business to do more with analytics rather than just be constrained to building visualisations’,” said Ulag. “It’s really hard to get data engineers today — they’re expensive, they’re hard to find and the talent is in short supply. Enabling a business analyst to build a dataset with a full OLAP model is immediate; they can do that with Power BI Desktop right now.”

“Then the data set can grow. They can prepare data and munge it from eight different sources — in Azure Data Lake, hundreds of millions of rows, or billions of rows — and a business analyst can do it without any IT involvement. Instead of waiting in line for IT to be able to serve your needs, you help yourself — and by the way, you’re helping yourself in an environment where IT has full visibility, governance and control.”

IT can monitor Power BI data usage, which integrates with the new Azure Purview service for unified data governance across an organisation, as customers adopt other parts of the Azure data stack like Azure Synapse Analytics. “Those are things where IT gets involved, and it’s really a partnership between IT and business. Power BI Premium allows IT to feel confident that business is doing things that are completely appropriate within the policies,” Ulag noted.

That lets business users dig into the big data coming out of production systems like ecommerce, Ulag said. “Cosmos DB is used for lots of unstructured data — it’s not just a relational store, you can store all kinds of data in it. And guess what, Cognitive Services built into Power BI is really helpful for the business analyst. I have a whole bunch of text, which is user reviews sitting in my Cosmos DB database, and I want to understand the sentiment, I want to understand the topics folks are talking about. I just drag it into Power BI, and with a few clicks I can use sentiment analysis, I can use the phrase extraction.”

“Another common scenario is that people connect Cosmos DB to Synapse with Azure Synapse Link, and Power BI and Synapse work great together. You can open up the Cosmos DB data in Synapse, replicated in near real time, and do whatever you want with all the capabilities of Power BI Premium. It opens it up for business to be able to really get working with data.”