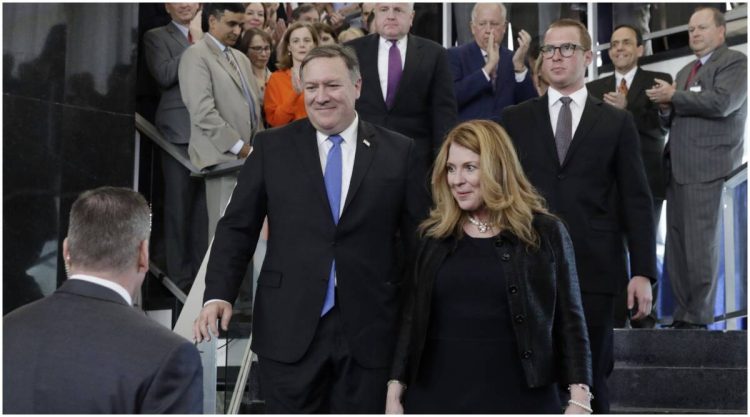 Secretary of State Michael Pompeo’s wife tested positive for the coronavirus, according to people familiar with the matter, after the couple came under criticism for holding parties at the State Department despite a nationwide spike in Covid-19 cases.

It wasn’t immediately clear how Susan Pompeo contracted the virus, though she tested positive just before her husband announced Dec. 16 that he was going into quarantine for exposure, said the people, who asked not to be identified discussing a private matter. The State Department didn’t identify who had exposed the top U.S. diplomat to the virus, though it said he had tested negative.

That same day, the department announced it was canceling the last of the secretary’s holiday parties for the season, an event for foreign ambassadors to the U.S. The Pompeos were faulted for going ahead with the parties for diplomats and their families even as health officials warned against large gatherings and the State Department told employees to avoid attending “non-mission critical events.”

The American Foreign Service Association had urged the department to “reverse course and model responsible behavior in accordance with its own guidelines.”

The State Department press office declined to comment to email and phone requests seeking a response from the secretary and his wife, and it wasn’t clear whether Susan Pompeo had attended any of the department holiday parties. The secretary of state’s public schedule for Dec. 15 said he would host a reception for families of U.S. diplomats.

President Donald Trump and his administration have repeatedly come under criticism for holding large gatherings that risked spreading the virus and over not doing more to stem the world’s largest outbreak. With more than 18 million U.S. cases and deaths exceeding 327,000, the president has been largely silent about the virus in recent weeks.

The State Department still hasn’t said how long Pompeo remained in quarantine. His Dec. 21 public schedule listed him as attending meetings and briefings at the department.

Susan Pompeo has played a prominent role in the department, helping oversee guest lists for parties and other gatherings. Earlier this year, the State Department inspector general’s office investigated whether her trips with Pompeo had violated ethics rules. A subsequent report cleared her though it added that she hadn’t gotten approval for the trips beforehand.

Like many of Trump’s top advisers and staff, Pompeo has repeatedly flouted coronavirus precautions, traveling abroad for meetings in which he repeatedly declined to wear a mask. In a Nov. 12-23 trip in which he was joined by his wife, Pompeo was photographed in meetings without a mask, and he and his wife attended dinners with small groups of people in Paris two nights in a row.