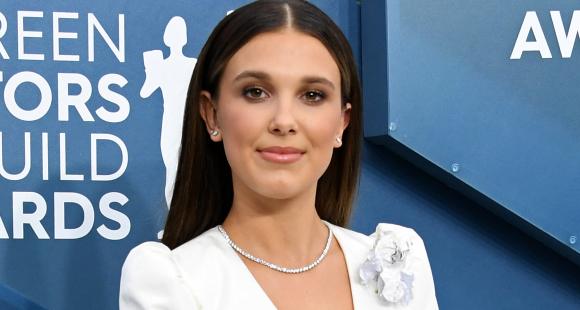 Millie Bobby Brown has been promoting her new film Godzilla vs Kong and which debuts in theatres in the US and on HBO Max soon. The Stranger Things actress is seen reprising her role as Madison Russell from Godzilla: King of Monsters in the new film. During the promotions of the film, Brown recently made a rather surprising revelation as she appeared for an interview with MTV. Whilst speaking about the kind of films she enjoys watching, Millie stated that she”s more into romantic dramas and has never watched some of the most popular franchise films including Marvel and DC films.

Considering her new film, itself is a part of one big franchise, the MonsterVerse, Brown was asked about her views on other franchises and particularly if she’s a Marvel or DC fan. Millie in a surprising answer admitted that she has not watched films from either franchise and hence can’t choose. Not just that, the 17-year-old actress further stunned everyone when she revealed that she hasn’t watched a single film from the Harry Potter saga either.

Speaking about her kind of films, Millie told MTV that she’s “more into like The Notebook, let’s put on some romance films.” Not just films but Millie also answered a few questions related to her favourite series and when asked to choose between Friends and The Office,  she quickly mentioned that she’s watched every episode of Friends and hasn’t yet watched The Office.

We bet fans of Brown are sure to be shocked by her revelation of never watching Marvel or DC films given that many have been campaigning for her to be signed for a superhero project soon.