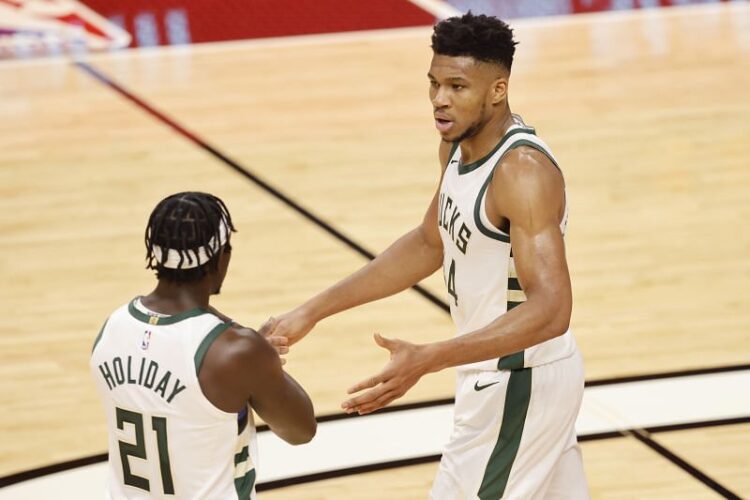 The Milwaukee Bucks take on the Sacramento Kings at the Golden 1 Center off the back of two impressive victories in the 2020-21 NBA.

They beat the injury-ravaged LA Lakers and the Portland Trail Blazers in their last two outings, with Giannis Antetokounmpo registering consecutive double-doubles. He registered 47 points against the Trail Blazers, with Khris Middleton and Jrue Holiday both registering more than 20 points.

The Sacramento Kings, meanwhile, come into this matchup off the back of two losses. They have seen some big performances from De’Aaron Fox this season, with the point-guard producing at least 20 points in his last six appearances.

The Sacramento Kings have done well offensively, with the likes of Richaun Holmes, Harrison Barnes, Buddy Hield, Tyrese Haliburton and Marvin Bagley all averaging more than ten points per game.

RELATED:  Charmed Season 3 Preview: Macy Recaps Before It All Goes to Hell

The Milwaukee Bucks will be happy with Giannis Antetokounmpo’s recent form. The two-time MVP winner sat out of the loss against the New York Knicks but has returned to produce three consecutive 25-point plus outings.

With Khris Middleton and Jrue Holiday also firing in recent weeks, the Milwaukee Bucks will look to improve on their third position in the Eastern Conference in the coming weeks. Their only injury concern is PJ Tucker, who sat out their last game and is expected to miss out again.

The Greek Freak has missed two games in recent weeks but has looked close to his best in the Milwaukee Bucks’ next three outings.

He started strongly against the Portland Trail Blazers and ended the game with a huge 47-point, 12 rebound- double-double.

The Milwaukee Bucks’ stuttering form of late had kept Giannis Antetokounmpo on the fringes of the MVP debate. He will look to change that narrative as the season progresses.

The Sacramento Kings have been impressive all season offensively and have the tenth-best offence in the league.

De’Aaron Fox has been a huge offensive influence and has also helped out in defence, averaging 1.2 steals per game.

He has been supported well by the Sacramento Kings’ forward pairing of Harrison Barnes and Buddy Hield. Richaun Holmes is averaging close to 15 points per game, along with 9.1 rebounds and 1.7 blocks per outing.

However, the Sacramento Kings are deficient in defense and could be tested by a strong Milwaukee Bucks lineup.

De’Aaron Fox has been hugely impressive for the Sacramento Kings, winning them multiple games single-handedly.

He comes into this matchup, having scored at least 20 points in all but one of his last 19 appearances. During this period, he has been the team’s biggest playmaker as well.

De’Aaron Fox has regularly come up clutch and has an overall impressive shooting efficiency of around 55%, averaging 24.7 points and 7.3 assists per game.

Only one Kings player has averaged more in a month since the three-point era (DeMarcus Cousins). pic.twitter.com/shoLNrfWux

RELATED:  Jake Paul boxing Ben Askren won’t give him the legitimacy he longs for, but it will be entertaining

De’Aaron Fox’s form suggests that he could require some stopping from Giannis Antetokounmpo and co.

The Bucks haven’t seen their three stars play together for quite a while this season, something they would like to rectify come the playoffs. They have been dominant in their last two games and go in as slight favorites against a highly efficient Sacramento Kings lineup.

Where to watch Bucks vs Kings?

Local coverage of the Milwaukee Bucks vs Sacramento Kings game will be available on Bally Sports Wisconsin and NBCS California. The match can also be live-streamed with an NBA League Pass.

De’Aaron Fox is totally right about pointless All-Star Game, which should be...