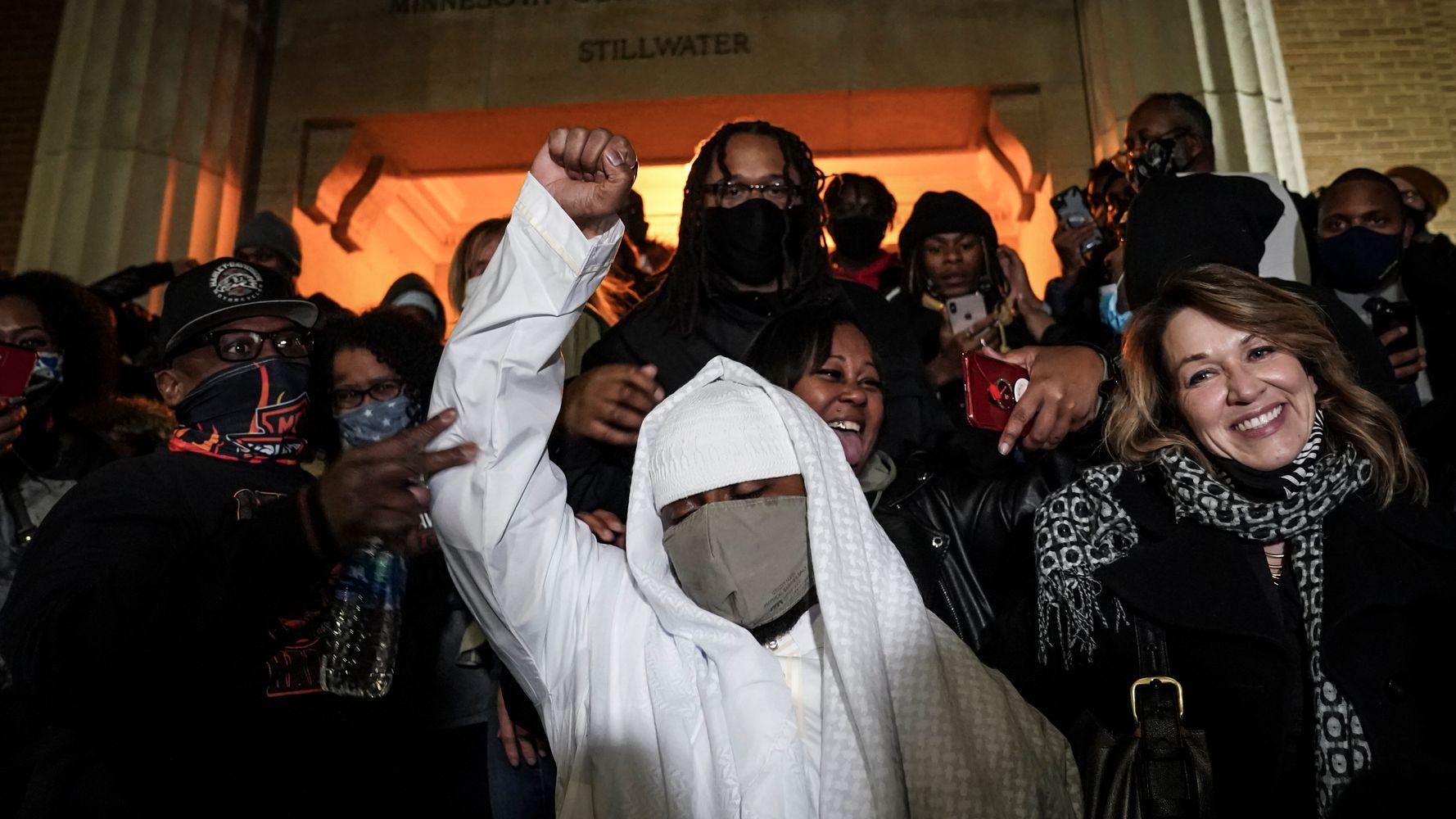 MINNEAPOLIS (AP) — A Black man sent to prison for life as a teenager took his first steps of freedom Tuesday to the sound of ringing bells and cheering family members and supporters, hours after a pardons board commuted his sentence in a high-profile murder case.

Myon Burrell’s prosecution and harsh punishment raised questions about the integrity of the criminal justice system that put him away nearly two decades ago for the death of a young girl killed by a stray bullet. Earlier this year, The Associated Press and APM Reports uncovered new evidence and serious flaws in the police investigation, ultimately leading to the creation of an independent national legal panel to review the case.

Last week, panel members published their findings, raising many of the same concerns, including that police had “tunnel vision” while pursuing Burrell as a suspect. The panel said it saw no purpose served by keeping Burrell locked up, pointing to his age at the time of the crime and his good behavior behind bars.

Burrell’s request for a pardon was denied. But it was the first time in at least 22 years that Minnesota commuted a sentence in a murder case, according to the Department of Corrections.

And the release was swift. Just hours after learning his life sentence had been commuted, with two remaining years to be served on supervised release, he walked out the front door of Stillwater prison into below-freezing temperatures. Dozens of bundled supporters, some holding signs and balloons, surrounded Burrell while cheering “Myon’s free! Myon’s free!”

After jumping into a waiting car, he was soon home. Friends and relatives filtered into the living room, greeting him with gifts and hugs.

“It’s just a blessing,” he said, while standing outside on the street searching the sky for the moon and stars, which he said he’s been longing to see.

Burrell has always maintained his innocence in the 2002 killing of 11-year-old Tyesha Edwards, struck in the heart while doing homework at the dining room table with her little sister. He told Minnesota’s Board of Pardons members Gov. Tim Walz and Attorney General Keith Ellison that his “heart goes out” to her family. The third board member, Supreme Court Chief Justice Lorie Skjerven Gildea, recused herself, citing prior involvement with the case.

Edwards’ death enraged the African American community in a city just emerging from some of the nation’s highest homicide rates, briefly earning it the nickname “Murderapolis.” Sen. Amy Klobuchar, who then headed the county attorney’s office, has used Burrell’s conviction over the years as an example of her tough-on-crime policies, most recently during a Democratic presidential primary debate last year.

The AP investigation that followed sparked national outrage and gave Burrell’s family and community organizers the ammunition they needed to get Klobuchar’s attention. She called for the creation of the independent panel of legal experts. Barry Scheck, co-founder of the Innocence Project, and Laura Nirider, of Northwestern University’s Center on Wrongful Convictions, oversaw that effort.

Klobuchar released a statement Tuesday saying the pardon board made the right decision. She also urged a conviction-review unit to continue investigating the facts.

The yearlong investigation by The AP showed there was no hard evidence — no gun, DNA or fingerprints — tying Burrell to the shooting. Among other things, police did not collect a corner store’s surveillance video, which Burrell said could have cleared him. And video footage showed the lead homicide detective offering a man in police custody $500 for Burrell’s name, even if it was just hearsay. Officers relied heavily on a single eyewitness, who offered conflicting accounts, along with jailhouse informants, who benefited generously for testifying. One had his 16-year prison sentence cut to three.

Burrell’s co-defendants said the teenager was not at the scene that day.

And one, Isaiah Tyson, admitted to being the shooter.

Burrell, who was 16 at the time of the slaying, appeared at his hearing via videoconference from inside the state’s Stillwater prison. He became emotional as the board voted, and put his hand on his head and said, “Thank you, thank you. I appreciate it.”

Burrell told the board about his time in prison, saying he did not know what was going on when he was sentenced, and that he converted to Islam and became a religious leader while behind bars.

“I tried to make the best of my situation,” he said. “I started going in and extracting medicine out of the poison. The trials and tribulations I was going through, I tried to get something out of it.”

His request was accompanied by testimony from community leaders and letters from young men in prison, who attested to his strong character and moral leadership.

Jimmie Edwards III, Tyesha’s brother, told the AP that he and his family were upset by the decision. He said the justice system failed his family, and media coverage and support for Burrell’s release overshadowed his sister’s death.

Gov. Walz recommended the commuted sentence, saying science has found and the U.S. Supreme Court has ruled that teenage minds work differently than those of adults, and that a life sentence for a teenager is too extreme.

“While this board is not a fact finder, it does have the power to determine when justice is served through the power of clemency and mercy,” he said. “We cannot turn a blind eye to the developments in science and law as we look at this case.”

Walz addressed the Edwards family during the hearing, saying: “We’re not here to relitigate the crime committed against your family that took your daughter away. There is nothing I can do to ease your pain, and it will not be made better. But we must act today to recognize the law in this area has changed. Justice is not served by incarcerating a child for his entire lifetime for a horrible mistake committed many years ago.”

New questions about Burrell’s case surfaced just before Minneapolis was thrust into the national spotlight after a police officer held his knee against George Floyd’s neck outside a convenience store as Floyd gasped for breath. It was the same Cup Foods store that Burrell said could have provided his alibi if surveillance tapes had been pulled.

Floyd’s death sparked racial injustice protests and put renewed focus on some law enforcement practices from the 1990s and early 2000s, when harsher policing and tougher sentencing led to the highest lock-up rates in the nation’s history. Those incarcerations hit minority communities the hardest.

Burrell was jailed during an era “marked by racially charged fear mongering about young ‘super-predators’ who would be violent for the entirety of their lives,” Mark Osler, who chaired the panel, wrote in the Minneapolis Star Tribune this past weekend.

Edwards III, Tyesha’s brother, said news of Burrell’s release is especially hard after the death of his mother last year.

“When she lost our sister, it took her away. She was never able to recover,” he said of his mother. “I’m glad my mom is not here to witness this, because it would just break her heart.”