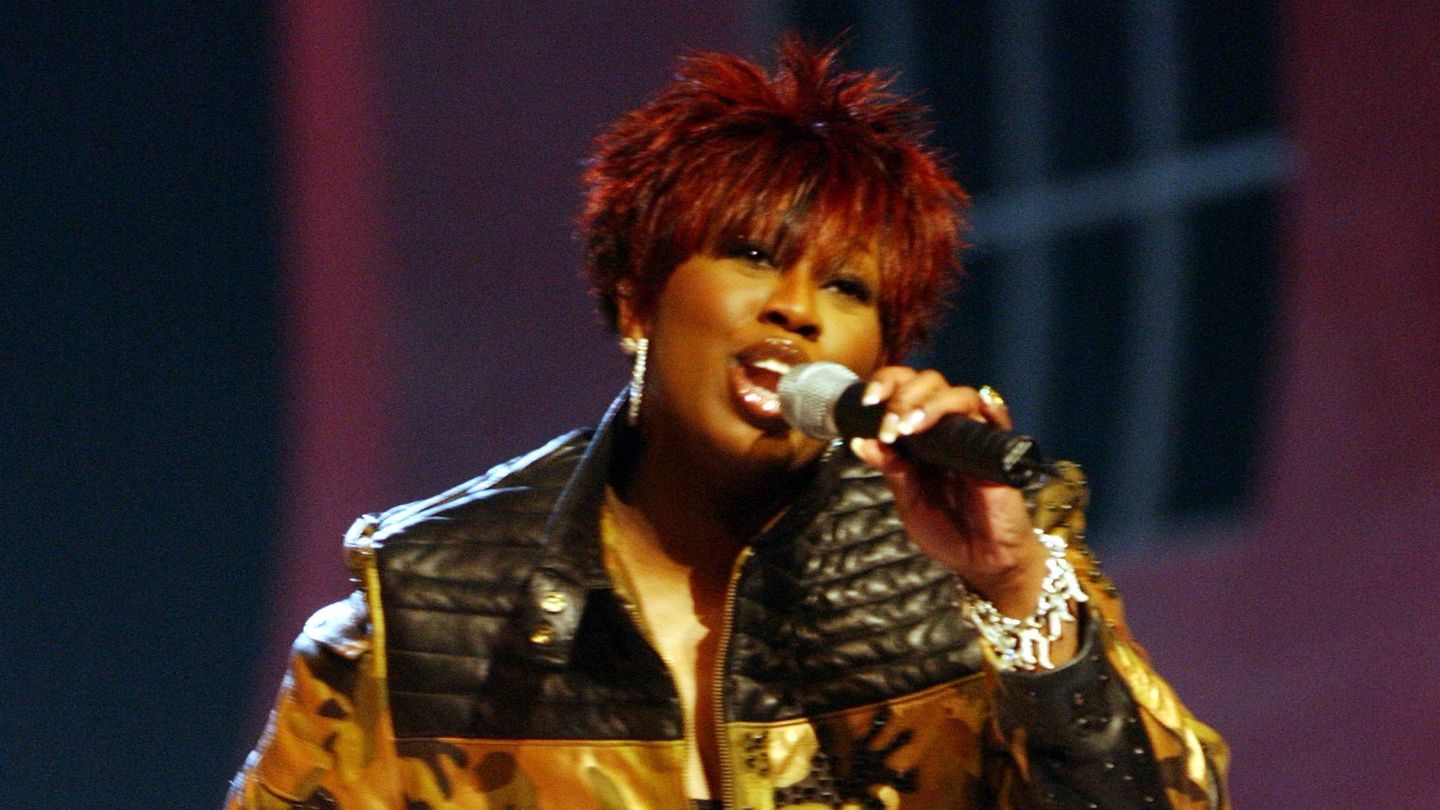 When Missy Elliott got into the studio to record her third album Miss E… So Addictive, the bar was already set high. Her first album, 1997’s Supa Dupa Fly, was accompanied by iconic music videos for “The Rain (Supa Dupa Fly),” and “Sock it 2 Me” that found her dancing in outlandish costumes to elaborate choreography on cinematic sets in collaboration with visionary director Hype Williams. For Missy’s sophomore effort, Da Real World, Williams likewise created the visual for “She’s a Bitch” all while Missy’s continued creative partnership with Timbaland earned her a Guinness World Record when “Hot Boyz” hit 18 weeks at No. 1 on the Hot Rap Singles chart.

Entering the new millennium with So Addictive, released 20 years ago this week on May 15, 2001, the pressure should’ve been on. Yet Missy told MTV News the entire behind-the-scenes experience yielded “a very stress-free album.” “We worked in Westlake Studios in L.A. and we caught a good vibe there! The vibe was very futuristic and retro mixed,” she said in an email. “It varied from ‘Dog in Heat’ and ‘One Minute Man’ — that had the old school vibe — to ‘Get Ur Freak On’ and ‘Slap! Slap! Slap!,’ where the sounds were futuristic, so you got a nice cocktail of music.”

The sound and mood-spanning album and its accompanying music videos still hold up as ahead of their time today. During recording, Missy set out to create music that the listeners would not only hear but also feel. On the album’s lead single “Get Ur Freak On,” Missy raps, “Me and Timbaland been hot since 20 years ago,” a line that holds even more resonance two decades later.

“When we’re in the studio together, she pushes me to the next level,” Timbaland told MTV News. “So Addictive was a very impactful album. And it was very critical for her because she wanted to make each song and each visual different. Every album she does, she’s always like, ‘I’ve gotta be better than the last.’”

Though it was released as the project’s lead single, “Get Ur Freak On” was actually the last track Missy recorded for So Addictive. Timbaland insisted the album was solid and complete, but Missy pressed for one more song. “He went up and down the keyboard, and finally I heard the ‘Get Ur Freak On’ sound, and I said, hey that right there — that is crazzzzzy!” Missy said in an email. “So I ran in the booth with only three sounds on that record. It wasn’t the complete song the world knows now, but I went in and rapped on it and when I came out of the booth, Tim said, ‘That’s crazy.’ Guess he wasn’t mad at me anymore!”

With its infectious Punjabi-influenced melody, “Get Ur Freak On” is a song Timbaland says came from “just vibing in the studio.”

“When I found that sound, I was like, ooh, this feels like India, or ooh, this feels like Bombay,” Timbaland said. “And when people ask me, ‘What was you thinking?’ I’m like, everything you was thinking. I was searching for something that was going to take me somewhere I ain’t never been… It’s like playing a video game. Sometimes you put it on pause. You come back the next day and you see it different. It’s the same thing when you create. That’s how me and Missy are. That’s how we create.”

Timbaland admits he never watches Missy record her songs, as Missy prefers to get in her zone solo. The same process applies to her music videos. So Timbaland, who appears in several of the clips alongside her, was kept in the dark about the concepts Missy imagined until the actual days of filming.

The cameo-filled music video for “Get Ur Freak On” went equally big with Missy grooving in a jungle as dancers wiggle from trees around her. It marked her first team-up with Dave Meyers, who quickly became her go-to visual collaborator for the next 20 years. Near the end of the clip, Missy swings from a chandelier, an element that almost didn’t make it into the video.

“Whatever I would visualize, [Meyers] would try to make happen,” Missy said in an email. “I said at the last minute, I want a chandelier to hang from in my video, and he said ‘OK!’ I said, but I want it to be a big oversized one… and he said, ‘OK!’ He said, ‘Somebody go find Missy a chandelier for her to hang from,’ and Gina Harrell from the video department at the label was like, ‘But we are over budget,’ and Dave was like, ‘But we need it, so let’s find it.’ I don’t even know how much that thing cost but I’m probably still paying for it.”

Another star of Missy’s visuals alongside Missy herself was Trina, who appears in “Get Ur Freak On” and raps on the remix of “One Minute Man.” The two first met in 2000 during spring break at Daytona Beach. At the time, Trina was hot off the release of her debut album, Da Baddest Bitch. Missy recruited the Miami rapper to appear on her own LP.

“Mona [Scott-Young, Missy’s then-manager,] reached out to me like, ‘Hey, Missy’s got this record for you. She wants you to jump on it with Ludacris,’” Trina recalled. “I was excited. Then Missy called me maybe a week or so after that like, ‘Mona said she sent you this, I want to make sure you’re feeling it.’ I remember I was kind of sick at the time. I had a cold. And she had to turn it in I think that day or the next day, and I was like, oh my God, I want to get my voice together. I had no time, I had a deadline. So I had to do it with a scratchy voice, sounding very raspy. And I was like, ah, I hate my voice. And everybody was like, ‘We love it, we love it.’”

In the video for “One Minute Man,” Missy dances in a luxury hotel with colorful rooms, bouncy beds, and even defies gravity in a dojo. In a particularly memorable scene, she pulls her own head off of her neck and continues to sing. Trina said she has been a fan of Missy since the beginning of her career, but she remembers being shocked by the video for “She’s a Bitch.” When it was time to film her part for the “One Minute Man” video, she had no idea what to expect.

“She just said, ‘I’m shooting my video. I need you to be in L.A. Mona’s gonna hit up your manager with all the info,’” Trina said. “‘Everything’s going to be there. All you’ve got to do is show up.’ She didn’t give me no detail, no nothing. So just imagine me, I’m new in the game, I pulled up to her video, and it’s like a museum, because there are dancers hanging off the wall, there’s face paint, and there’s a big bed and it’s moving up and down. It was just next level. It was like being on a production of a movie.”

In addition to instantly iconic music videos, the album’s futuristic sounds made it feel like a brand-new experience. With Timbaland and Missy collaborating on fresh, forward-thinking beats and sonic templates, Missy earned her first Grammys; “Get Ur Freak On” won the award for Best Rap Solo Performance and album cut “Scream a.k.a. Itchin’” won for Best Female Rap Solo Performance.

But immortalizing those fresh sounds was no easy task. Before the days of digital software Pro Tools and FL Studio, Missy and Timbaland recorded vocals and instrumentals on large tapes called reels, which Missy has described as “a headache” to use.

“They required more labor,” Timbaland says. “You grab the tape, you put the tape in, and you have to line it up.  And then the engineer had to go run to work the tape machine, and then run to the back to change the tape and lock the tape… We were in a time where our brains were working faster than what the world was doing.”

To this day, Miss E… So Addictive remains one of Missy’s most revered albums. Her artful visuals have since earned her an MTV Video Vanguard Award in 2019 — “I have worked diligently for over two decades, and I never thought that I would be standing up here receiving this award,” she said in her acceptance — and the six-beat “Get Ur Freak On” melody is one of the most recognizable sounds in pop music.

Outside of her own music, Missy’s pen game is untouchable. In 2002, she collaborated with Trina again to produce “No Panties,” the lead single from her sophomore album Diamond Princess. She has also written and produced tracks for Mya, Beyoncé, Mariah Carey, Toni Braxton, and more.

But So Addictive captures Missy’s ambition not only as a musician but as an artist. “There were no boundaries when it came to my artistry and music,” she said in an email. “I did what felt good to me and not what was the trend — so if you weren’t following the trends, you basically had to break the boundaries.”

“It was all about the Missy era,” Trina said. “It was the sound, it was the collaborations, it was the videos, the creativity, the space performances. It was just everything that she gave to the game. I don’t feel like there’s any artists in the game that have been as creative as Missy Elliott. I feel like she’s a genius and she deserves all her flowers.”