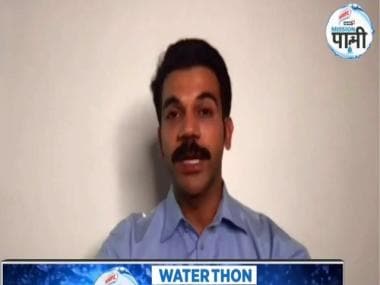 He also added that he would like to be a part of a film made on the cause of water conservation. The Newton actor said that cinema has the power to bring real change, and hopes a director will take a project forward.

In an effort to spread awareness against the looming water scarcity, actor Rajkummar Rao joined Network18’s initiative Mission Paani Waterthon. Rao listed several steps that can be followed to conserve water on a daily basis.

“I’m very conscious about water conservation and I want to tell everyone that we don’t need to try very hard to save water. There are small steps that we can imbibe in our lives, through which we can contribute a lot to this issue. Because there is nothing greater than water. 70% of our body is water. A small thing, that I can say, is that when you are brushing your teeth in the morning, a lot of people keep their taps on. There is no point. It just takes half a second to put the tap off. So please turn your taps off. A lot of men, when they shave, they keep their taps on. Don’t do that. These little steps are very easy and need to be a part of our lives. We can make a big contribution to this issue,” he said.

“I don’t use a shower, I use a bucket so that I know how much water I’m using. When we use a shower we don’t get an idea and a lot of water is wasted. So there are the few things that I want to request everyone to make a part of our lives. We might not understand it now, but in a few years we will understand the value of it,” he added.

Rajkummar opened up about his own experiences growing up in a middle-class joint family in Gurugram. He added that their family faced water crunch and had to get a tank made to store water. He added that as a child, it was a source of fun for him, but he has now understood the significance of the tank after growing up.

He also added that he would like to be a part of a film made on the cause of water conservation. The Newton actor said that cinema has the power to bring real change, and hopes a director will take a project forward.

The Mission Paani Waterthon, an initiative by News18 and Harpic India, brought together some of the biggest celebrities, leaders and changemakers to join hands for an initiative towards saving water and sustaining it for the generations to come.

The event will emphasise on ‘Paani Ki Kahaani, Bhaarat Ki Zubaani’, the theme to raise awareness about water crisis in India.

You can contribute to the cause by taking a Jal Pratigya. Visit www.news18.com/mission-paani