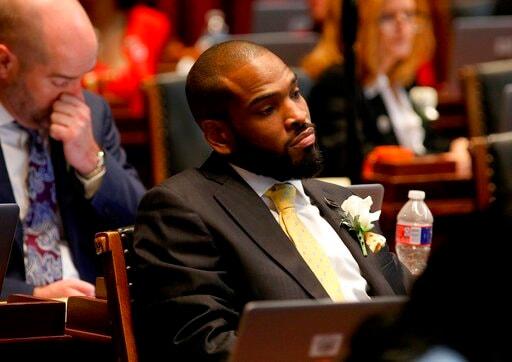 COLUMBIA, Mo.: A Missouri state lawmaker allegedly had sex with an intern and then threatened a staffer to keep quiet about it, according to a House Ethics Committee report released Wednesday.

The Ethics Committee gave Democratic St. Louis Rep. Wiley Price until Wednesday afternoon to resign over the alleged misconduct or face being formally denounced and stripped of much of his legislative power.

He had not left office at the time of the reports public release.

Price fell under scrutiny after a staffer filed a report claiming that he told the staffer that he had sex with the intern after a Jan. 22 party at a bar near the Capitol building in Jefferson City.

Price attended mandatory House sexual harassment training about a week earlier. House policy forbids lawmakers from romantic relationships with interns, employees or anyone else they supervise.

Price did not immediately return requests for comment Wednesday from The Associated Press, but he denied to the committee that he had a sexual relationship with the intern.

The staffer told investigators that Price later threatened her job after he found out he was being investigated for misconduct. The staffer said Price told her where I come from, people die for behavior similar to the staffer’s.

Ethics Committee members agreed that Price retaliated against the staffer for fulfilling her job as a mandatory reporter. They also found that Price repeatedly lied to the committee and investigators.

He denied ever calling or texting with the intern but backtracked after being shown records of him calling her the night they allegedly had sex.

Price alleged the staffer was retaliating against him because he told the staffer he planned to replace her. But investigators found that he never notified House Administration or otherwise documented any intention to fire her before she started speaking out against his behavior.

Members of the bipartisan Ethics Committee voted unanimously to recommend that Price be banned from working with interns, banned from leadership positions and stripped of all his committee assignments if he doesn’t resign. They want him to pay the House close to $22,500 for expenses related to the investigation.

Committee members also said Price should be censured, which means formally denounced by the full House.

Republican House leaders in a joint statement Wednesday wrote that they stand by the findings in the Ethics Committee’s report and intend to try to censure Price.

Democratic Minority Leader Crystal Quade said the next step is for the House to review the report and determine the appropriate action.

We expect that process to be conducted in a swift and fair manner when the legislature reconvenes in January, she said in a statement.

St. Louis voters first elected Price in 2018. He won reelection in November and is set to start a second two-year term when the Legislature convenes.

More than 100 state lawmakers across the country have been publicly accused of sexual misconduct or harassment since the start of 2017, according to an Associated Press review earlier this year. That tally has continued to grow, despite the fact that the vast majority of state legislative chambers now require lawmakers to undergo training about sexual harassment, the AP review found.

The Missouri House strengthened its policies against sexual harassment after former Republican House Speaker John Diehl in 2015 resigned while acknowledging he had exchanged sexually charged text messages with a House intern.