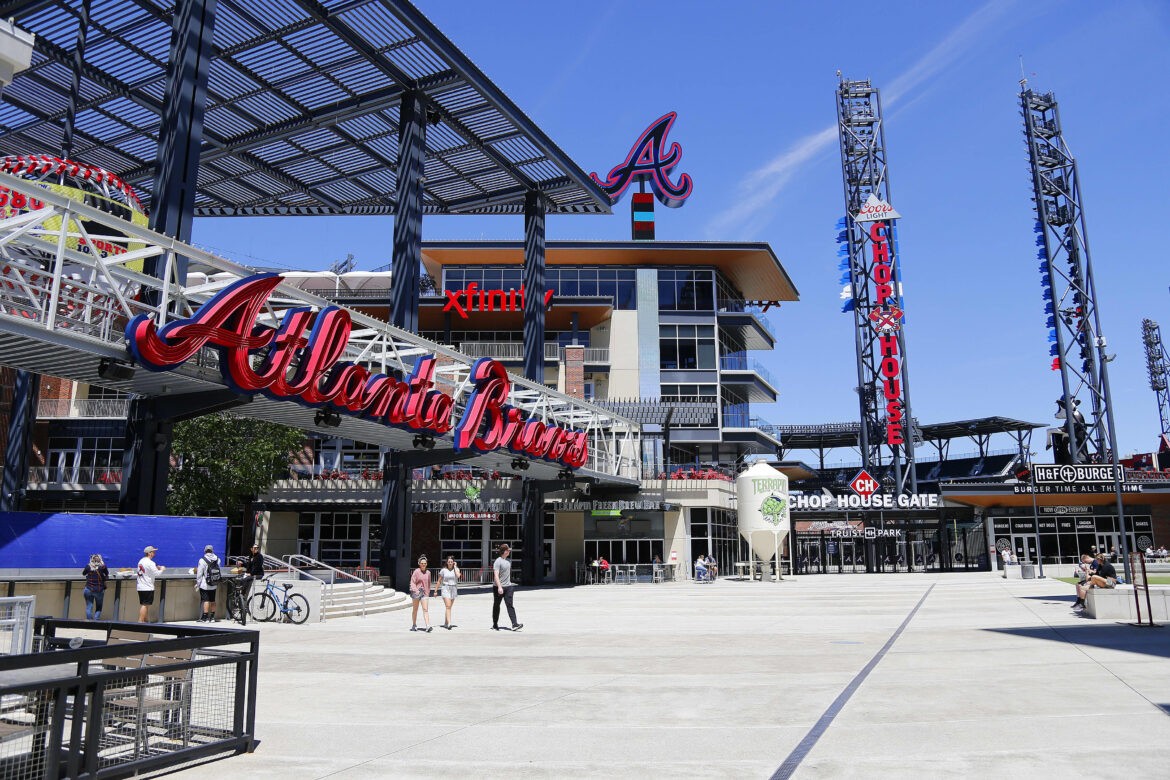 The Battery is a lively venue featuring shops, bars and restaurants from local chefs at Truist Park, home of the Atlanta Braves MLB team as the facility is currently closed while sports are on quarantine during the Coronavirus (COVID-19) pandemic in Atlanta, Georgia on April 18, 2020.

Major League Baseball commissioner Robert Manfred announced Friday that the 2021 All-Star Game will no longer be held in Atlanta.

The decision follows an election bill signed on Wednesday by Georgia Gov. Brian Kemp, which opponents say disproportionately disenfranchises people of color. It’s one of the first tangible responses to the law, which was denounced by business executives across the United States earlier this week.

Restaurants, hotels, rental car agencies and other businesses make money when these big events come to town. The MLB All-Star game generated about $49 million for the local economy when it was hosted in Atlanta in 2000, according to Baseball Almanac. The 2019 All-Star Game was projected to bring in $65 million for Cleveland, according to the same site.

“Over the last week, we have engaged in thoughtful conversations with Clubs, former and current players, the Players Association, and The Players Alliance, among others, to listen to their views,” Manfred said. “I have decided that the best way to demonstrate our values as a sport is by relocating this year’s All-Star Game and MLB Draft.”

“Just as elections have consequences, so do the actions of those who are elected,” Atlanta mayor Keisha Lance Bottoms said on Twitter of MLB’s decision. “Unfortunately, the removal of the @MLB All Star game from GA is likely the 1st of many dominoes to fall, until the unnecessary barriers put in place to restrict access to the ballot box are removed.”

“Major League Baseball fundamentally supports voting rights for all Americans and opposes restrictions to the ballot box,” Manfred said. “In 2020, MLB became the first professional sports league to join the non-partisan Civic Alliance to help build a future in which everyone participates in shaping the United States. We proudly used our platform to encourage baseball fans and communities throughout our country to perform their civic duty and actively participate in the voting process. Fair access to voting continues to have our game’s unwavering support.”

Manfred said MLB will honor commitments to support local communities in Atlanta. The league is still finalizing a new host city and “details about these events will be announced shortly,” he said.

“Today, Major League Baseball caved to fear, political opportunism, and liberal lies,” said Georgia Gov. Kemp said in response. “Georgians – and all Americans – should fully understand what the MLB’s knee-jerk decision means: cancel culture and woke political activists are coming for every aspect of your life, sports included. If the left doesn’t agree with you, facts and the truth do not matter.”

“This attack on our state is the direct result of repeated lies from Joe Biden and Stacey Abrams about a bill that expands access to the ballot box and ensures the integrity of our elections,” Kemp added. “I will not back down. Georgians will not be bullied. We will continue to stand up for secure, accessible, fair elections. Earlier today, I spoke with the leadership of the Atlanta Braves who informed me they do not support the MLB’s decision.”

The Atlanta Braves baseball team said on Twitter it is “deeply disappointed” by the decision. “This was neither our decision, nor our recommendation and we are saddened that fans will not be able to see this event in our city. The Braves organization will continue to stress the importance of equal voting opportunities and we had hoped our city could use this event as a platform to enhance the discussion. Our city has always been known as a uniter in divided times and we will miss the opportunity to address issues that are important to our community. Unfortunately, businesses, employees, and fans in Georgia are the victims of this decision.”

Correction: This story was updated to remove a reference to the 2020 All-Star game in Los Angeles, which was canceled.