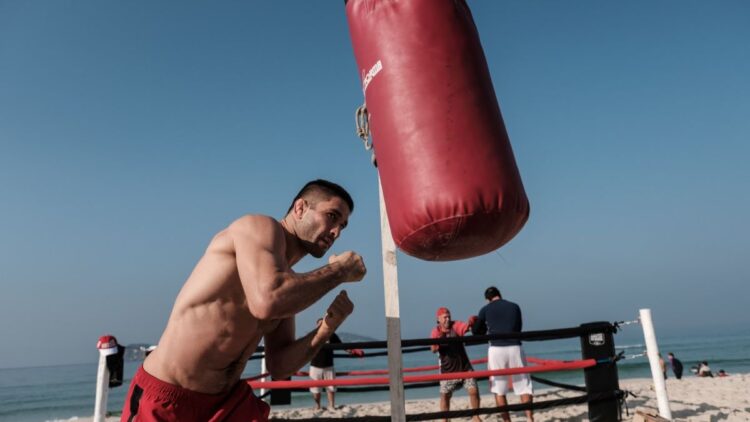 This is not what Case meant by Touch Me, Tease Me.

It’s unfortunate that this will be the first time many have heard of Khetag Pilev because he’s a professional boxer, a freestyle wrestling Olympian (2012), as well as a mixed martial artist, immediately putting him in rare company.

But nothing was rarer than what happened to him last night in Philadelphia (fittingly, at the 2300 Arena, previously known as the ECW Arena.)

Pilev, who entered the bout with a 5-1 record in MMA (which mirrors his record in boxing), faced 3-0 Devin Goodale at Cage Fury Fighting Championships event CFFC 94. Pilev lost the bout by technical knockout in round two after it was discovered that his left ring finger… kinda went missing. On a clip that surfaced online, you could hear the befuddled announce team of John Morgan and CM Punk (yup, that one) react.

On the broadcast, Punk said, “I don’t understand exactly what happened,” Punk said. “We’re not gonna replay it for you, ladies and gentlemen, but it wasn’t a compound fracture. It wasn’t a dislocation, a break, a laceration. His finger was just gone. It’s gone. It fell off, ripped off.”

According to ESPN MMA reporter Marc Raimondi, people spent several minutes trying to locate Pilev’s finger, which eventually was recovered. Pilev has since had his finger reattached at the hospital after being escorted to the emergency room.

“In the second round, [Gooden] caught my glove with one hand and held it,” Pliev said, via ESPN. “I felt my finger snapped. He kept pulling my glove, and my finger snapped. We kept fighting. When the second round was finished, I could see my [bone] was out in the open. I wanted to keep fighting because I felt like I had this guy. But the doctor saw that and stopped the fight.”

Event Promoter Rob Haydak said not only did people look to secure the lonely digit, but there was also an announcement over the 2300 Arena’s public address system asking people to look for the lost finger (which is also just SO Philly). Haydak added that Pilev was … calm.

“It was crazy. He didn’t even flinch,” Haydak said. “He was getting ready to do the [official] decision, and I was like, ‘Uh, guys, get him out of the cage and go put his finger back on.’”

I don’t know if Pilev is married, but at least there wasn’t a wedding ring on that finger.