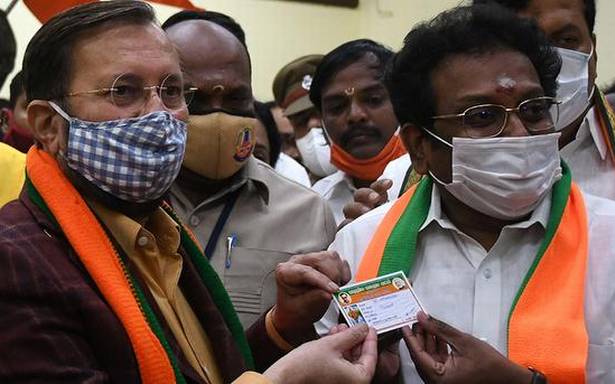 Makkal Needhi Maiam (MNM) founding general secretary A. Arunachalam joined the BJP on Friday in the presence of Union Minister Prakash Javadekar. He contended that the MNM leadership had not paid heed to his view that the three farm laws brought in by the Central government would benefit farmers.

Mr. Arunachalam said he came from a family of farmers and still had links to farming. The three laws, against which farmers are protesting in Delhi, were brought in by Prime Minister Narendra Modi and Home Minister Amit Shah with a long-term vision.

He said he had asked the MNM leadership not to rally with the Opposition parties in Tamil Nadu against the laws, as the Opposition was only keen on knocking off the benefits of the legislation from the hands of the farmers.

“I come from a farmers’ family. So I can say that farmers know what benefits these laws will give them. I took these up with Kamal Haasan and the MNM leadership. But they did not pay heed to my views,” he said, after joining the BJP, at the party headquarters in Chennai. He said he had asked the MNM leadership not to look at the laws as having been brought in by the BJP, but by the Centre to benefit farmers in the long term. But this was to no avail, leaving him with no option but to quit the party, he added.