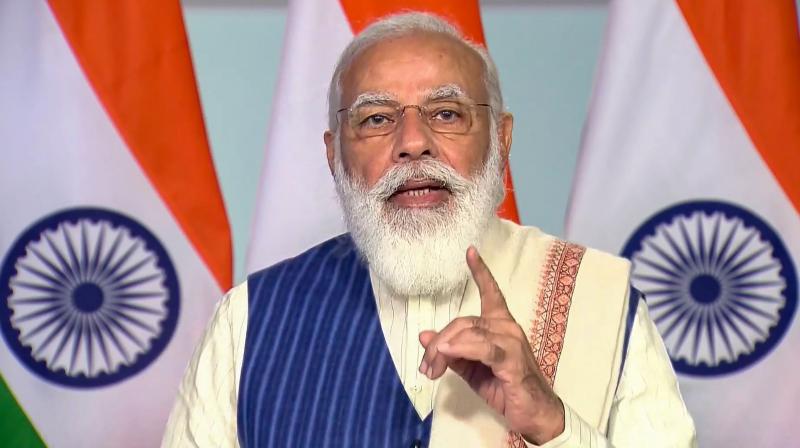 New Delhi: With the Covid-19 pandemic intensifying across India, Prime Minister Narendra Modi on Tuesday gave an assurance that whenever it becomes available, the vaccine will be accessible to all citizens and the government will ensure it meets the necessary scientific criteria.

The PM was chairing a virtual meeting with the chief ministers of the eight worst-affected states, including his home state Gujarat. The government has, however, ruled out a nationwide lockdown to control the pandemic.

Mr Modi sought unity among states to combat the pandemic but also attacked political rivals, and sources said that during the meeting he accused the Opposition of playing politics over the issue. He even pulled up Haryana Chief Minister M.L. Khattar for not coming up with a better strategy to combat the pandemic, as West Bengal Chief Minister Mamata Banerjee sought her state’s GST dues from the Centre.

Mr Modi added that the Centre’s aim was to bring down the fatality rate, now at 1.7 per cent, to less than one per cent.

The PM convened the meeting as India saw 37,975 new Covid infections reported in the past 24 hours, taking the nation’s aggregate number of infections to 91.77 lakhs, while recoveries crossed 86 lakhs, the Union health ministry’s data showed.

While the national daily virus case count has remained below 50,000 for some time, several urban areas — including Delhi — have seen a surge, leading to enforcement of several measures, including curfews, in some cities.
Calling for raising the frequency of RT-PCR tests (considered the most accurate in terms of detecting the coronavirus infection), Mr Modi also said cold storage facilities for storing the vaccine must be made available on a priority basis. He added efforts were on to make medical colleges and district hospitals self-sufficient in oxygen generation and said the process for establishing over 160 new oxygen plants was underway.

Attacking his political rivals, Mr Modi said at the meeting that while no one can forecast when the vaccine will come, “some people” were playing politics over it and nobody can stop them from doing so.

Sources said when Haryana CM Manohar Lal Khattar started reeling out figures on the number of infections and deaths in the state, Mr Modi cut him short and asked about his plan to tackle the infection instead, rather than reeling out figures. The PM urged all chief ministers to share their feedback in writing on their strategies to counter the pandemic.