Justin Bieber is achieved success and fame a lot early on in life. And with the fame, also came in controversies. 7 years ago, Justin Bieber was arrested in Miami. His arrest had created a lot of buzz in the media since Justin was just 19-year-old at that time. And now, the Baby hitmaker has opened up on his arrest and also shared a positive and uplifting message for all his fans. The Sorry singer shared an image which is a paparazzi clicked image after his arrest. It’s his back to the camera with his hands in cuffs behind him. He is seen in a black hoodie and black leather pants too. Also Read – 2020 Recap: From Tom Cruise shooting in space to Brad Pitt-Jennifer Aniston’s reunion to Madonna’s bathtub video — these were the top newsmakers in Hollywood

Recalling his arrest in the Miami incident, Justin Bieber wrote, “7 years ago today I was arrested, not my finest hour. Not proud of where I was at in my life. I was hurting, unhappy, confused, angry, mislead, misunderstood and angry at god.. I also wore too much leather for someone in Miami.” The Yummy singer added that whatever happened back then has only renewed his faith in God. ” All this to say God has brought me a long way. From then til now I do realize something.. God was as close to me then as he is right now. My encouragement to you is to ‘let your past be a reminder of how far god has brought you,” Justin added. Also Read – BTS becomes the most mentioned K-pop artistes of the year on Twitter in India

To end everything on a positive note he urged people and his fans with an inspiring Monday Motivation quote. They are his words about the incident. “Don’t allow shame to ruin your “today” let the forgiveness of Jesus take over and watch your life blossom into all that God has designed you to be. LOVE YOU GUYS WITH MY WHOLE HEART,” he said. Check out Justin Bieber’s arrest post below: Also Read – Justin Bieber BLASTS Selena Gomez fan who urged the singer to bully Hailey Bieber, saying, ‘We need to f**king bombard that s**t’

Justin’s model wife, Hailey Baldwin Bieber dropped a heart emoticon on his post. Check it out below: 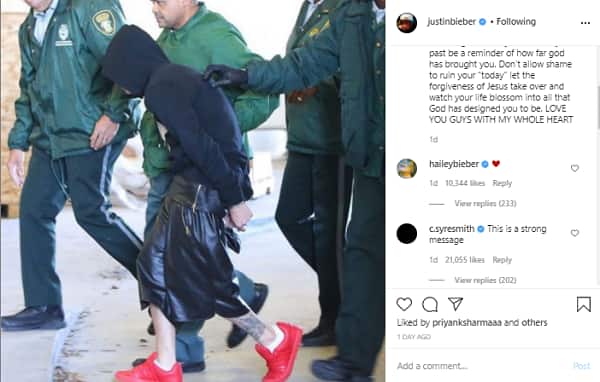 What do you have to say about Justin Bieber’s Monday Motivation post? Let us know your thoughts by tweeting @bollywood_life.