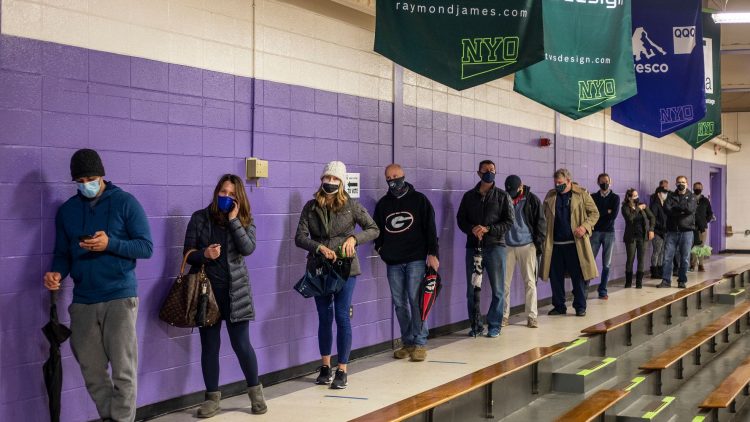 More than 1.4 million ballots have already been cast in Georgia’s Jan. 5 Senate runoffs, signaling record turnout as voters decide which party will control the upper chamber of Congress, according to the Georgia Secretary of State’s office.

As of Sunday, 1,470,764 Georgians had voted in the two contests, featuring Republican Sen. David Perdue against Democrat Jon Ossoff and Sen. Kelly Loeffler against the Rev. Raphael Warnock, a Democrat.

Of those votes, 569,267 were cast via absentee ballot and 901,497 were cast during early in-person voting, which began Dec. 14, the secretary of state’s office told HuffPost on Monday.

The numbers rival turnout at this point in the November general election, though the Democratic edge in turnout is narrower, according to The Washington Post. The two Senate races triggered runoffs because none of the candidates garnered the majority of votes needed to win outright in their races last month.

Democrats need to win both seats to split the Senate 50-50 with Republicans. Vice President-elect Kamala Harris would cast tie-breaking votes in the Senate after being sworn into office next month, essentially giving Democrats control of the chamber.

Should Republicans win at least one seat, they will maintain control of the Senate, likely obstructing President-elect Joe Biden’s incoming administration from executing its legislative agenda.

Hundreds of millions of dollars have been poured into advertising and get-out-the-vote efforts on each side. Georgia had been a Republican stronghold for decades until Biden won the state this year, giving Democrats hope they can flip the state’s Senate seats as well.

About 36,000 ballots have been cast in the runoffs so far by Georgians who didn’t vote in the November election, including people who were too young to vote last month, the Post reported.

“There’s a lot on the line,” Gabriel Sterling, a top official in the Georgia secretary of state’s office, told the Post. “People’s emotions are raw right now. One side is elated and celebrating, and the other side is spitting nails.”