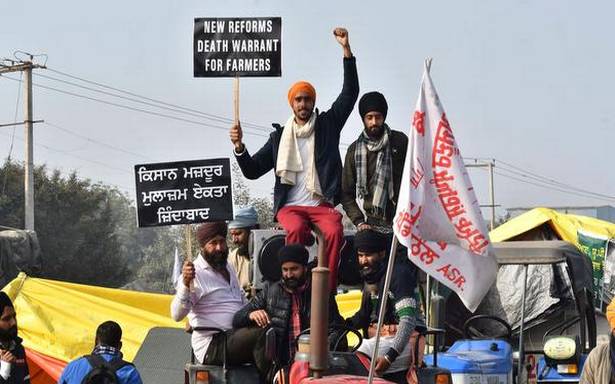 Protesting farmer leaders have threatened to close the Delhi-Noida border crossing at Chilla on Wednesday if three contentious agricultural reform laws are not repealed. On the 20th day of protest, both the protestors and the Centre reiterated their positions and dialed up the rhetoric, but made no concrete efforts to resume negotiations.

“Jab pyar karte hai toh jaat biradi toh koi dekhta nahi hai. Pyar karna toh gunah thodi hai (when someone falls in love, caste and community don’t matter to them. Falling in love is not a crime, is it),” asserted Pinki, the 22-year-old Hindu girl whose Muslim husband, Rashid, was arrested in Moradabad under the new Ordinance against Unlawful Conversion.

In the past four years, nearly twice the number of illegal Bangladeshi migrants were caught leaving the country compared to those coming in illegally, according to data available with the Border Security Force (BSF) and the National Crime Record Bureau (NCRB) shows.

British Prime Minister Boris Johnson will be the Chief Guest of India’s Republic Day celebrations, U.K. Foreign Secretary Dominic Raab said here on Tuesday. He stressed that the Indo-Pacific region was one of the “highest” focus areas of the U.K.’s foreign policy.

Insisting that he and co-star Rajinikanth wanted to change everything in Tamil Nadu, Makkal Needhi Maiam (MNM) founder Kamal Haasan on Tuesday reiterated that the two could come together for the welfare of the State.

The applications of Bharat Biotech, Serum Institute and Pfizer seeking emergency use authorisation for their COVID-19 vaccines are being examined, the Centre said on Tuesday asserting that drug regulator DCGI seeking more data from these companies will not impact the vaccine-roll out timeline.

The Mumbai police on Tuesday filed a chargesheet against Binoy Kodiyeri, son of former Kerala CPI(M) secretary Kodiyeri Balakrishnan, in an alleged rape

The proposal of the Election Commission of India (ECI) to extend the facility of postal ballots to overseas electors was pending with the Law Ministry, sources in the Commission said on Tuesday.

Congress chief whip in the Rajya Sabha Jairam Ramesh refuted the government’s claim that informal discussions had been held with Opposition leaders before deciding against holding the winter session of Parliament.

The Orissa High Court has ordered that the salary of Odisha Finance and Law Secretaries be withheld if the pension of a person, who retired from service 22 years ago, is not regularised by next week.

As a part of the commemoration of Netaji Subhas Chandra Bose’s 125th birth anniversary in 2022, the Union Culture Ministry was planning a museum in Kolkata, an exhibition at the Victoria Memorial and cultural performances in West Bengal, the Ministry said in a statement on Tuesday.

The U.S. has imposed sanctions on NATO-ally Turkey for its purchase of Russia’s S-400 missile defence system, U.S. Secretary of State Mike Pompeo announced on Monday. The issue of sanctions under Section 231 of the Countering America’s Adversaries Through Sanctions Act (CAATSA) for purchase of Russian arms is of particular interest to New Delhi, which is also in the process of buying the S-400 from Moscow.

The high-level FSDC headed by Finance Minister Nirmala Sitharaman on December 15 discussed the additional measures that could be taken by the government in the next Budget to accelerate growth while maintaining financial stability.

While a journalist was sorting out a technical glitch during Ajinkya Rahane’s virtual interaction on Tuesday, the India vice-captain turned to team manager Girish Dongre and muttered in Marathi (rough translation): “Doesn’t feel like I’m addressing a press conference, feels like I am talking to myself”.