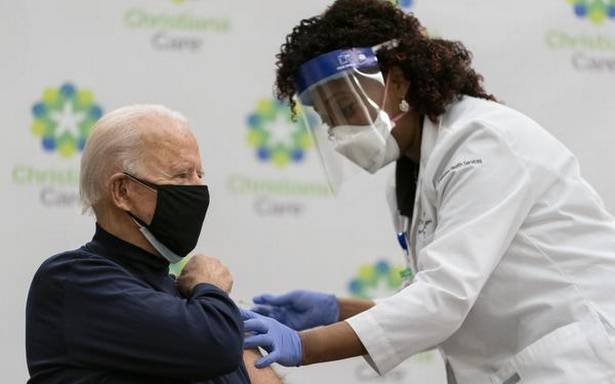 U.S. President-elect Joe Biden received a COVID-19 vaccine live on television on Monday in a campaign to boost Americans’ confidence in the jabs — and in marked contrast to President Donald Trump’s mixed messaging.

The government has decided to extend the suspension of the Insolvency and Bankruptcy Code (IBC) till March 31, 2021, to help businesses cope with the lingering difficulties posed by the COVID-19 pandemic, Union Finance Minister Nirmala Sitharaman said on Monday.

U.S. President Donald Trump on Monday presented the prestigious Legion of Merit to Prime Minister Narendra Modi for his leadership in elevating strategic partnership of the two countries and emergence of India as a global power.

The Centre on Monday decided to set up a high-level committee to plan the commemoration of Netaji Subhas Chandra Bose’ 125th birth anniversary in 2022.

Appearing set to reject the fresh offer of talks by the Union government, farmer unions spearheading the agitation are of the opinion that the three laws are pro-corporate and promote stocking and black-marketing of the food. The final decision, however, will be taken in a meeting of Samyukt Kisan Morcha, a joint front of farmer unions, on Tuesday.

A surveillance cameras-based monitoring system will be soon be in place at four more important railway stations in Tiruchi Railway Division.

There should be a comprehensive public health Act with suitable legal provisions to keep checks and controls over private hospitals in times of a pandemic and to curb black marketing of medicines, the standing committee on Home Affairs, headed by Congress leader Anand Sharma, has said in a report that was submitted to Rajya Sabha Chairman Venkaiah Naidu on Monday.

The National Human Rights Commission has directed the Odisha Chief Secretary and the Director General of Police to inform about steps being taken to create awareness of witchcraft accusations and violence and compensation for the victims.

Political parties in Tamil Nadu on Monday submitted a representation to a visiting high-level delegation of the Election Commission of India, seeking single-phase polling for the Assembly election in 2021. The ruling AIADMK sought the completion of the polling process by the fourth week of April.

5G readiness is one of the top three considerations amongst premium smartphone users (83%) in India just behind battery life (84%) and smartphone brand imagery (84%), as per a study titled ‘The 5G Future Now.’

The Board of Control for Cricket in India’s (BCCI’s) Annual General Meeting (AGM) on December 24 is set to approve the addition of two new teams to the Indian Premier League, but IPL 2021 may still be an eight-team tournament, with the familiar round-robin league followed by the Playoffs.