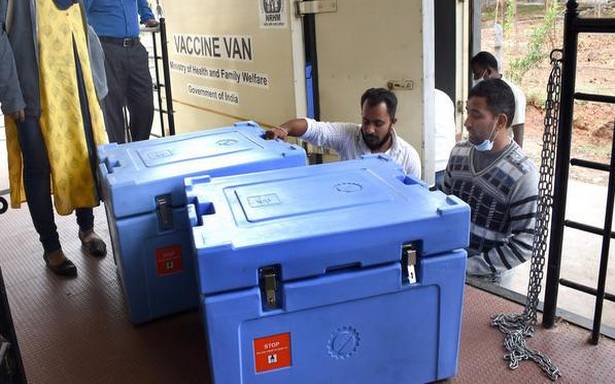 Prime Minister Narendra Modi will flag-off the first phase of the pan-India roll out of the COVID-19 vaccination drive on January 16 at 10:30 a.m. via video conferencing. The world’s largest vaccination programme will begin at a total of 3006 session sites across all States/UTs, which will be connected virtually throughout the exercise.

Also read: COVID-19 vaccine not for pregnant and lactating women yet: Health Ministry

The ninth round of talks between the Centre and the farmer unions on Friday failed to break the impasse over the demand to repeal the three contentious farm laws. It was, however, agreed to continue the direct dialogue in parallel with the Supreme Court-appointed panel’s proceedings on the same issue.

Former Congress president Rahul Gandhi on Friday alleged that the Narendra Modi government was being “remote controlled” by a handful of corporate houses and the three farm laws were an example of Mr. Modi trying to “hand over” what belongs to farmers.

India’s trade with China last year fell to the lowest since 2017, with the trade imbalance declining to a five-year low on the back of a slump in India’s imports from China.

The Supreme Court is scheduled to hear the farmers’ protests case on Monday amid media reports that one of the four members of its expert committee, set up on January 12 to negotiate between the government and farmers, has recused himself.

After an interval of 21 months, the Supreme Court will be considering the review petition filed by the EPFO (Employees Provident Fund Organisation) against the apex court verdict on the pension and the appeal filed by the Ministry of Labour and Employment.

Nepal has raised the Kalapani boundary dispute with India during the Joint Commission meeting, visiting Foreign Minister Pradeep Kumar Gyawali said here on Friday. The Minister said that the Indo-Nepal boundary dispute exists in “two segments” and Kathmandu wishes to find a solution to the matter urgently.

The Bombay High Court on Friday extended the protection granted to Republic TV editor-in-chief Arnab Goswami and other employees of ARG Outlier Media Private Limited from the Mumbai police till January 29 in the alleged Television Ratings Point (TRP) manipulation case.

The trust set up to oversee the construction of a Ram Mandir in Ayodhya started a nationwide drive on Friday for collecting funds, with President Ram Nath Kovind making the first contribution of ₹5 lakh.

The appointment on Thursday of Kashmir-origin Sameera Fazili as deputy director of the U.S. National Economic Council (NEC) by President-elect Joe Biden sparked off celebrations amongst her extended family in Srinagar.

U.S. prosecutors now believe supporters of President Donald Trump planned to “capture and assassinate elected officials” in their siege of the Capitol building last week, according to a new court filing.

The Indian Army has signed a $20-million contract with ideaForge, a player in unmanned aerial vehicle (UAV) technology, to procure undisclosed quantities of a high-altitude variant of SWITCH UAV, an indigenous system used in surveillance operations.

Friday happened to be a dream day for debutants Washington Sundar and T. Natarajan, two players who were not originally in the squad and staying back just as net bowlers. At stumps on day one, the duo from Tamil Nadu picked up three of the five wickets India took, with Washington getting the key wicket of Steve Smith.