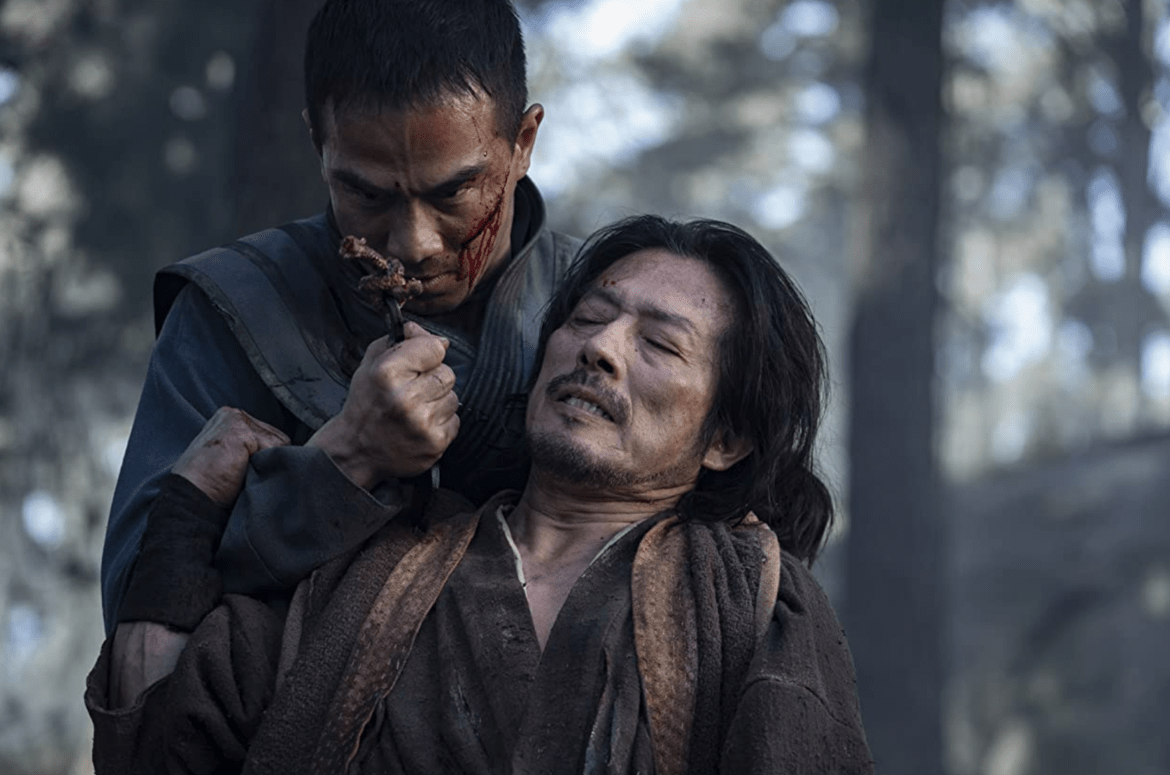 If the first 13 minutes of next month’s Mortal Kombat — which Warner Bros. made available to select press recently — are an indication, the new movie adaptation of the seminal video game franchise is going to be a bloody good time. (Emphasis on “bloody,” though the good times could be rolling right along with the heads. As Nerdist’s Rosie Knight proclaimed, “We’ve Seen 13 Minutes of Mortal Kombat and It’s Flawless.”)

The opening sequence, captured with lush-forested cinematography, feels far more like a gory Ang Lee than Paul W.S. Anderson, who directed 1995’s PG-13-rated Mortal Kombat. Set in feudal Japan, the scene finds Hanzo Hasashi, aka Scorpion (Hiroyuki Sanada), dicing up foot soldiers after an attack on his family that leads to a clash with all-time rival Bi-Han, otherwise known as Sub-Zero (Joe Taslim). The blood splatter in the early goings is something special — like a less-populated The Bride vs. The Crazy 88’s match from Quentin Tarantino’s Kill Bill — and it’s merely the prologue.

During a recent press event, director Simon McQuoid and producer Todd Garner said one of the biggest challenges in making the film was staying true to the source material and the gory nature of the game’s violence, even in 8 bits, while avoiding the studio kiss of death that is an NC-17 rating.

“No one from the studio from the top down, no one ever wanted to pull back. Everyone wanted to do justice to Mortal Kombat. That was from Day One, so that was great,” said McQuoid, a veteran commercial director from Australia who makes his feature film directorial debut with Kombat.

“What we had to be a bit careful of was … you can get to NC-17 territory pretty quick. It’s different in a video game when it’s not real human beings. When you move this across to reality, a different set of things start to happen in your mind, and you get rated slightly differently. So there were certain things that are in the game that would mean the film would be unreleasable. And none of us wanted that. … So we were balancing that stuff all the time. And there’s some stuff that you will see that really gets quite close to the line because we didn’t want people to go, ‘Meh. Seemed kind of lame.’”

Though fan-favorite characters from the game, first launched in arcades in 1992 and later on Nintendo, Sega Genesis and Gameboy consoles, appear, the story centers on a new protagonist — Cole Young (Lewis Tan), an MMA cage fighter unaware of his heritage who’s drawn into the fantastic realm of Outworld after being hunted down by Sub-Zero.

The body count, as you might expect, is numerous levels above zero. “It’s not like there’s hundreds of them, but there’s enough,” McQuoid says. “It’s all part of the balance. If we had too many of them, it would start to pitch the film away from tonally sort of bringing it into this big cinematic massive version of the film. … It’s cinematically really beautiful and very authentic and very real. … That brutality allowed us to be more authentic because it means we didn’t really have to hold back when someone gets a kunai through the head. There would be blunt splattering out of the back, right?

“Blood is a big part of the film… but also blood represents family connection and a bloodline. And so that’s part of the story. So I wanted to elevate even the idea of that to something that you would feel because it’s a more sort of emotional connection.”

In capturing that bloody brutality, it helped the first-time filmmaker that one of the movie’s producers, E. Bennett Walsh, had plenty of “bloodwork” on his résumé. He worked on both Kill Bill volumes with Tarantino, speaking of The Bride and those ill-fated Crazy 88’s.

Again, it’s about balance. The filmmakers had to thread the needle in the edit bay to avoid going past an R rating into NC-17 territory.

“We kind of stuck the landing once, thankfully,” McQuoid says of submitting the film to the ratings board. “We didn’t want to underdo it, and we couldn’t overdo it.”