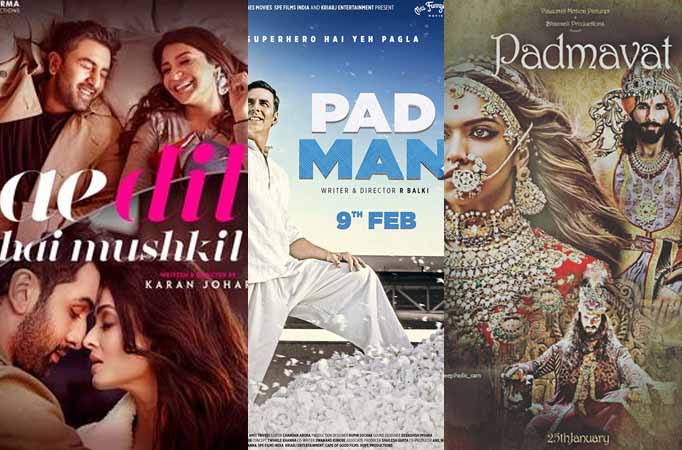 MUMBAI: Several big movies have clashed at the box office in the past. Here’s looking at some of the most controversial ones of all time.

Bollywood movies releasing on the same date or around the same time always call for a huge clash at the box office. While sometimes both the films manage to garner success with a fair equal share; many times it leads to an intense battle to reign supreme at the box office.

Films often tend to clash during the festive seasons as production houses or leading superstars prefer to release their movies either during a national holiday or on a festival date. So take a look at the films that released on the same day at the box-office.

Last year Diwali saw one of the most anticipated bouts of the year as two complete opposite genres went to battle to reign supreme at the box office. While ‘Shivaay’ was an action/thriller film with some cool action sequences ‘Ae Dil Hai Mushkil’ was a romantic drama that also marked the comeback of Aishwarya Rai Bachchan to the big screen after a gap of seven years. Both the films managed to enter the 100 crore club but there can be only one victor.

The much-awaited film ‘Padmavat’ is finally said to release with Akshay Kumar’s ‘PadMan’. An official announcement from is makers of the ‘Padmavat’ film is still awaited. Akshay Kumar’s film was announced earlier. The film also stars Radhika Apte and Sonam Kapoor in lead roles. ‘Padmavat’ has been facing a lot of issues, even many political parties threatened the team of the film, they even sent death threats to Sanjay Leela Bhansali and Deepika Padukone. We all are eagerly waiting for the film as it has got a green signal from the CBFC. Both the films are slated to release on 26 January 2018.

Also read: Prince Narula and Rannvijay Singha to come up with a special song on Roadies

The box office clashes that took place earlier in 2017 were not so good. While the Shah Rukh Khan starrer was a bigger release, Hrithik’s ‘Kaabil’ gave it the fight to remember. The Rahul Dholakia directorial earned more than 130 crores and just about got itself safe while ‘Kaabil’ on the other hand did quite well for itself. ‘Raees’ was one of the best performances of Shah Rukh Khan and for Hrithik as well playing a blind man wasn’t easy. Both the films had different plots. ‘Kaabil’ also starred Yami Gautam in a lead role and likewise in ‘Raees’ Mahira Khan played the lead role in the film.

Famous for his love stories, Sanjay Leela Bhansali was unable to put another feather on his cap with the debut film launching two new faces, Ranbir Kapoor and Sonam Kapoor. Farah Khan’s magic worked and with her blockbuster movie, the industry received a shining star, Deepika Padukone. The other film also caused so much hype as Salman Khan featured for a cameo role in Saawariya.

Dilwale v/s Bajirao Mastani: Who won the final round of the worldwide box office battle?

‘Bajirao Mastani’s release date was decided by the producers before the shooting started for this period costume drama. Though Sanjay Leela Bhansali announced his film first, the film took a while to reach the finished line. Rohit Shetty’s ‘Dilwale’ was shot in a record time of ten months and is SRK’s only release of the year which will enjoy an edge over the former.

SS Rajamouli’s magnum opus and much ambitious Baahubali hit screens on July 10. Spectacular visual effects and an engrossing story catapulted Baahubali to become one of the biggest blockbusters in the history of Indian cinema. Made on a lavish budget, the film which initially came across as a risk has already turned a profitable venture for all its investors. On the other hand, you had Bollywood’s Bhaijaan coming up with yet another blockbuster this Eid. Bajrangi Bhaijaan, laced with an emotional plot and some terrific performances zoomed its way into the 300 crore club at the domestic box office almost easily and took the overseas box office by a storm as well.

Both films belonged to diverse genres and catered to a diverse set of audiences. ‘Haider’ was a hard-hitting drama whereas ‘Bang Bang’, was a masala action entertainer. ‘Bang Bang’ managed to enter the Rs 100 crore club. However, it is not considered to be a success due to the high cost of production. On the other hand, ‘Haider’, made on a much lesser budget, earned around Rs 60 crore and received high acclaim from the audience and critics alike.

Don vs Jaan-E-Mann clash was highly publicised as Shah Rukh Khan was all set to take on the combined box office force of Akshay Kumar and Salman Khan. However, upon the release, the clash turned out to be a one-sided affair.  Right from its opening day, Don directed by Farhan Akhtar took a lead at the box office over Jaan-E-Mann and over the next few days left the rom-com far behind.

Be it Dil and Ghayal, Raja Hindustani and Ghatak, or Lagaan and Gadar, whenever Sunny Deol and Aamir Khan have the same release dates, the movies turn out to create history. Lagaan was the 3rd Indian movie to be nominated for the Oscar Awards for the category of Best Foreign Language film. Whereas, Gadar was a chartbuster, by almost breaking the records set by ‘Sholay’ by the number of tickets sold.

Aditya Chopra wielded the megaphone for the second time after his blockbuster ‘DDLJ’. ‘Mohabbatein’ got Amitabh and SRK sharing screen space for the first time which also featured a whole lot of new talent making their screen debuts. Vidhu Vinod Chopra’s ‘Mission Kashmir’ was technically brilliant but didn’t do the kind of business that the former did besides Hrithik Roshan’s presence.

Most memorable clashes of Bollywood movies at the box office; check out the list