Vora, a former chief minister of undivided Madhya Pradesh and also a former governor of Uttar Pradesh, had served as a Rajya Sabha member four times and as a Lok Sabha member once. 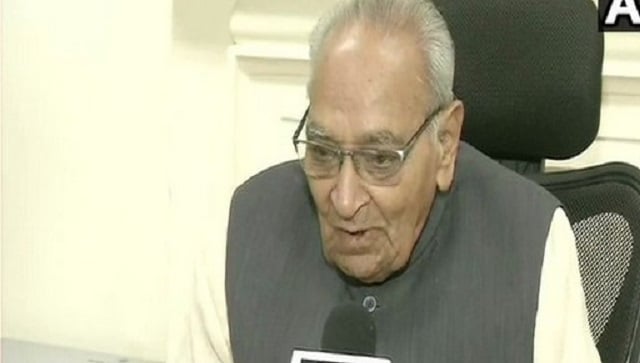 complications, his family said. He was 93.

Vora was admitted to the Escorts Hospital in Okhla in Delhi a few days ago with a urinary infection. He also had a lung infection and was put on ventilator support, his family said.

He completed 93 years only on Sunday. He will be cremated in Chhattisgarh where his body will be taken either later in the day or on Tuesday.

Vora, a former chief minister of undivided Madhya Pradesh and also a former governor of Uttar Pradesh, had served as a Rajya Sabha member four times and as a Lok Sabha member once.

Modi said he was saddened by the demise of the Congress veteran.

Shri Motilal Vora Ji was among the senior-most Congress leaders, who had vast administrative and organisational experience in a political career that spanned decades. Saddened by his demise. Condolences to his family and well-wishers. Om Shanti: PM @narendramodi

Deeply saddened to learn about the demise of Shri Motilal Vora, former Madhya Pradesh Chief Minister and former Rajya Sabha member. He was an astute administrator. My condolences to the bereaved family. Om Shanti! pic.twitter.com/pqBDZOsTp5

In his condolence message, Defence Minister Rajnath Singh said he was sad on hearing about Vora’s demise. The minister said he had worked closely with Vora when he was UP Governor. “He was respected across parties as a gentle and experienced politician. I express my condolences to his family in this hour of grief,” Singh said in a tweet in Hindi.

Rahul Gandhi condoled Vora’s demise, saying he was a wonderful human being and a true Congressman.

Vora ji was a true congressman and a wonderful human being. We will miss him very much. My love & condolences to his family and friends. pic.twitter.com/MvBBGGJV27 — Rahul Gandhi (@RahulGandhi) December 21, 2020

Priyanka Gandhi Vadra said every Congress leader and worker is feeling personally pained over Vora’s death. “Vora ji was a symbol of loyalty, dedication and patience towards the ideology of Congress,” she said.

She also said Vora was present at every party meeting even at an advanced age of 92 and expressed his views openly on every issue. “Today, while bidding him goodbye I feel sad that an elder member of the family has left us. We will all miss him very much.”

Saddened to learn of former Madhya Pradesh Chief Minister and Congress Veteran Motilal Vora Ji’s demise. Everyone in @INCIndia will dearly miss him. My thoughts & prayers are with his family in their time of grief. RIP!

Condolences poured in for Vora from Madhya Pradesh chief minister Shivraj Singh Chouhan of BJP and his predecessors Kamal Nath and Digvijaya Singh, both from the Congress. “Motilal Vora has served the party for the life timeby remaining on different posts and worked for strengthening the organisation. A day before only he turned 93,” Nath said in a message.

Describing Vora as a dedicated and sensitive leader for the people, Digvijaya Singh said the former’s demise was an “irreparable loss” to the Congress.

Congress’ chief spokesperson Randeep Surjewala said, “A giant is no more. Sh Moti Lal Vora was the epitome of commitment, dedication and loyalty. He inspired an entire generation by his untiring attitude and capacity to brave every adversity. My heartfelt homage.

The Congress party also tweeted through its official handle, “We offer our heartfelt condolences on the sad demise of stalwart Congress leader, former Union Cabinet Minister and former Chief Minister of Madhya Pradesh, Shri Motilal Vora. Congress has lost a guiding light. May his soul rest in peace.”