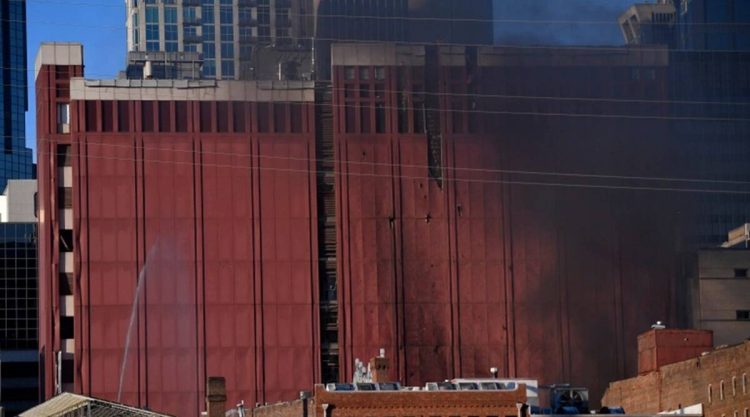 A motor home parked on a street exploded in downtown Nashville at dawn on Friday, moments after a recorded message emanating from the vehicle warned of a bomb, in what police called an “intentional act” in the heart of America’s country music capital.

Three people suffered minor injuries in the Christmas morning blast. Authorities said it was uncertain whether anyone was inside the recreational vehicle when it exploded, but police reported hours later that investigators had found possible human remains near the site.

Nashville Mayor John Cooper ordered a curfew imposed around the blast site through the holiday weekend as FBI investigators comb the scene, though police said they were aware of no further threats to Tennessee’s most populous city.

Early this morning, an explosion occurred in downtown Nashville around Second Avenue and Commerce Street. Federal, state and local law enforcement partners are on the scene to investigate what we believe was an intentional act.

https://platform.twitter.com/widgets.js
The blast came just moments after officers responded to reports of gunfire in the area and discovered the recreational vehicle parked outside an AT&T office tower in downtown Nashville at about 6 a.m. CST (1200 GMT).

Officers quickly went door-to-door in nearby buildings to hustle people to safety, and called for dispatch of the police bomb squad, which was on its way to the scene when the vehicle blew up, police spokesman Don Aaron said.

The Metro Nashville Police Department posted a photo of the recreational vehicle on its Twitter feed and said that the vehicle had arrived in the area at 1:22 a.m.

An area resident identified on CNN as Betsy Williams told the network she was awakened by the sound of gunfire and looked out her window to see an RV parked across the street as it began playing a message delivered by a “computerized” female voice. She said the voice warned the vehicle contained a bomb and started a minute-by-minute countdown to the actual explosion.

“Everything shook, it was quite a blast,” she told CNN.

The fiery blast destroyed a number of other vehicles parked nearby, shattered windows and severely damaged several adjacent buildings, sending a pall of black smoke into the sky that could be seen for miles. The mayor said 41 businesses in all sustained material damage.

Fire officials said three people were taken to local hospitals with relatively minor injuries, and they were listed in stable condition. Authorities said quick action by police to begin evacuating the area before the blast likely prevented more casualties.

“Obviously, they heard the announcements coming from this vehicle,” Aaron told reporters. “They took them seriously. And worked to seal the streets to protect folks and we think it worked.” He called the blast “an intentional act.”

Shops and other buildings were closed given the early hour of the day, the Christmas holiday and prevailing COVID-19 restrictions on public gatherings, also helping to keep injuries to a minimum.

MNPD, FBI & ATF investigating the 6:30 a.m. explosion on 2nd Ave N linked to a vehicle. This appears to have been an intentional act. Law enforcement is closing downtown streets as investigation continues. pic.twitter.com/YOfMTaKmTH

At an early evening briefing, Drake, the police chief, told reporters there were “no fatalities we know of,” but said investigators were examining “tissue that we believe could be human remains” found in the vicinity of the blast.

Police said they had not ascertained whether anyone was in the motor home when it exploded.

Drake said authorities had received no threats of an attack prior to the reports of gunfire at the outset of the incident, describing the blast as a “total surprise.”

“We had no pre-warnings at all,” he said.

The explosion occurred about two blocks from Lower Broadway, where Nashville’s famous live music venues are located. The Ryman Auditorium, former home of the Grand Ole Opry, is situated just three blocks from the blast scene.

The blast could be heard for miles and was felt at least nine blocks away, knocking one officer off his feet, Aaron said.

Agents from the Federal Bureau of Investigation and the U.S. Bureau of Alcohol, Tobacco, Firearms and Explosives were assisting in the probe, agency officials said.

Andrew McCabe, a former deputy FBI director, told CNN an explosion the size of Friday’s blast would be investigated as a possible act of terrorism, whether domestic or international.

Police offered no explanation as to a possible motive, but McCabe said law enforcement may have been the target of the explosion given police were called to the scene beforehand.

Nashville’s vice mayor, Jim Shulman, told CNN the incident appeared to have been a solitary act, and police said they saw no ongoing threat, though bomb-sniffing dogs were being led through the downtown area as a precaution.

City Fire Chief William Swann said search teams also were checking nearby buildings for possible victims and to ensure the structures were sound.

Car bombings in the United States are rare.

A 1995 truck bombing in Oklahoma City killed 168 people including 19 children, and wounded hundreds. In April 2010, a food vendor foiled an attempt to set off a car bomb in New York’s Times Square.