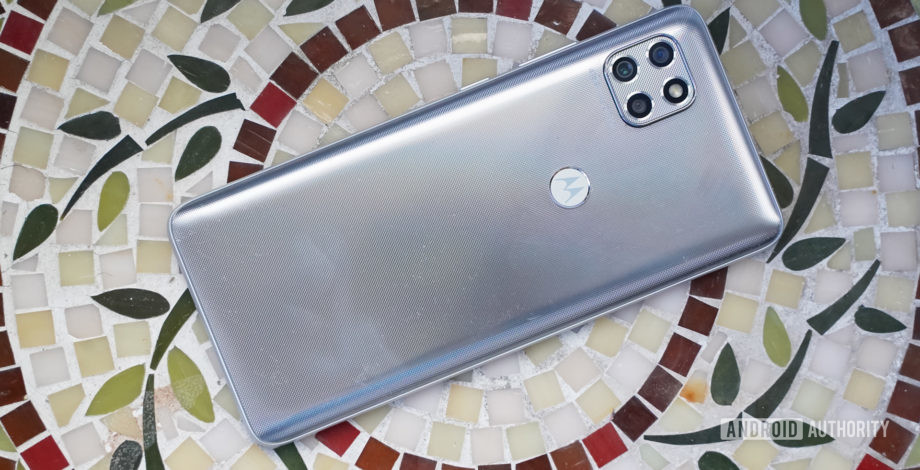 What is the Motorola One 5G Ace?

The 5G Ace is another affordable entry from Motorola that falls in its One line of devices. The One phones are known for their simple designs, basic features, and middle-of-the-road performance. Can the 5G Ace stand apart from its stablemates?

See also: The best budget phones you can currently buy

One thing certainly helps the phone get noticed: it’s silver. When manufacturers release “silver” phones, they often mean some sort of gray, but the Motorola One 5G Ace is true silver. It is also the only colorway available for the phone. The front may be black, but the entire rear panel is bright silver, which stands out when compared to other budget phones. It reminds me of the Tin Man from Wizard of Oz. The Motorola One 5G Ace is a big phone. It’s as tall as a Samsung Galaxy Note, though not quite as wide. However, it is thick, ostensibly to accommodate the larger battery within. I’d call it bulky even though there are bigger phones in the market. The overall size makes the top of the screen a little difficult to reach. Glass covers the front, while the frame and rear panel are formed by polycarbonate. That means it’s relatively light for its size — a saving grace.

The Motorola One 5G Ace’s bright silver colorway is a real head turner.

The rest of the hardware design is run of the mill. The volume toggle and screen lock buttons are positioned on the right edge of the phone, right where they’re expected. Unfortunately, these buttons feel a bit cheap to me. More plasticky than loose or anything like that.

A dual-purpose SIM card/microSD card tray is tucked into the left edge of the phone. Additionally, a USB-C port is available on the bottom edge for charging and data transfer, and a headphone jack is positioned to its left. A downward-firing speaker can also be found on the bottom. This makes it a mono phone and the sound is only so-so. The mid-frame almost comes across as metal. Almost. This thick band of plastic holds the front and rear panels together. Motorola also gave the rear panel a fine ridged pattern. It looks like it should have some physical texture to it, but the plastic is actually smooth.

The rear fingerprint reader is right where your finger expects to find it, and that’s a good thing. I found it easy to train and use, with quick and accurate performance. Further up, the camera module is encompassed in a small squircle in the upper left corner. With three lenses and a flash, it looks a bit cramped. The phone is rated IP52 thanks to a nano-coating on the inner components. This means it can handle some sweat or light rain/splashing, but not submersion. Don’t drop it in the pool!

In sum, the Motorola One 5G Ace is a simple offering that doesn’t do much to impress. The Motorola One 5G Ace’s screen is good, particularly for a $400 phone. It stretches 6.7-inches across the diagonal and packs Full HD+ resolution (2,400 x 1,080) in a 20:9 aspect ratio. Of note, the screen relies on LTPS LCD technology rather than IPS LCD tech. The low-temperature polycrystalline silicon is made at a much lower temperature than IPS LCDs, and it creates a faster, more responsive screen — particularly for big pieces of glass like this one. Most importantly, LTPS is easier to work with and thus has a lower cost. It’s a 60Hz panel, no fast refresh rates here.

The One 5G Ace has an ace of a display.

Practically speaking, it’s a really nice screen. I found it to be bright and sharp, with punchy colors and accurate white balance. It includes a full range of features for managing its behavior, such as night light, color balance, dark theme, peek display, and more.

According to Motorola, the screen fills 85% of the phone’s face, with just a slight forehead and chin above and below the display. Otherwise, the bezels are kept in check. A centered punch hole signifies the location of the selfie camera. The One 5G Ace has an ace of a display.

Is the Motorola One Ace powerful? The phone comes equipped with a Qualcomm Snapdragon 750G processor with 6GB of RAM and 128GB of storage. It handily beats top-level devices from three years ago (Snapdragon 820-835 era) in benchmarks. More importantly, the phone runs really well in daily use. I didn’t experience any stuttering, slow-downs, or frame drops while testing the phone. Most users will be happy.

Additionally, Motorola somehow wedged a 5,000mAh battery into the chassis, and it delivers big time. I easily coasted through two full days of battery life with the One 5G Ace. It was near depleted at the end of the second day, but there was still enough left in the tank that I wasn’t worried about it. The Snapdragon 750G’s efficiency cores do an admirable job of handling low-power tasks to keep the phone performing well while sipping (rather than slurping) power. Screen-on time reached nearly 10 hours over the course of two days, which is stellar.

Related: The best 5G phones you can buy right now

On the charging front, the device supports up to 15W wired charging. However, it ships with a 10W charger in the box. It took about 100 minutes to fully charge a dead battery.

Then there’s 5G. The phone supports sub-6GHz mid-band spectrum from AT&T, T-Mobile, and Verizon Wireless. Motorola sent the phone to us with a T-Mobile SIM card, so we gave it a spin on the Un-carrier. When 5G service was available, I saw solid speeds, but nothing like the blistering 1+Gbps downloads possible from mmWave. The best I got was 100Mbps. That isn’t bad, but it isn’t all that much faster than 4G either. The question in my mind is, could a 4G-only variant of the One Ace cost significantly less and still deliver a similar experience?

Is the Motorola One 5G Ace camera any good? Sigh. Motorola needs to update its camera strategy, and the One 5G Ace is a prime example of why.

The phone includes a 48MP main sensor that’s binned down to 12MP. It features PDAF and an aperture of f/1.7. Using the pro mode, you can shoot in the full 48MP resolution if you want. The main camera is joined by an 8MP ultra-wide-angle lens and a 2MP macro lens. I’d much prefer to see a telephoto lens over the macro. The majority of flagships feature standard, wide, and telephoto lenses. Motorola, OnePlus, Xiaomi, and others continue to insist that users want macro lenses. I disagree (and I digress).

See also: The best budget camera phones you can buy

Motorola’s camera app is solid. A quick flick of your wrist launches the camera and brings you to a viewfinder that’s easy to understand and use. I like that the basic mode selector takes you from photo to video and then everything else. The mode picker includes the video tools, too, so you don’t have to switch to video before going for one of the advanced video modes. You also have access to the flash and timer from the main viewfinder. Everything else is buried in the settings menu. The settings themselves are rich with options, allowing you to adjust most facets of the camera app.

The main shooter does a fair job when taking photos in well-lit spaces. Shooting the river near my house at midday ensured that I came away with usable photos. The majority of the pictures had clean focus, accurate white balance, and proper exposure. However, colors sometimes came across as muted, and other times looked richer. Consistency could definitely be better and the lack of OIS is disappointing.

The HDR function didn’t work quite as well as I’d have preferred either. I like a bit more range. For example, there should be far more detail visible under the bridge. The ultra-wide-angle gives you a bit more room to include stuff in your shot, though there’s some obvious optical distortion. The macro camera is a pain to use and requires you to focus by getting close to your subject and then moving the phone in and out to achieve the sharpest shot. The selfie camera features a 16MP sensor that’s binned to 4MP. It does a decent job, though low-light situations lead to grainy, grainy photos. There’s no selfie portrait mode, which is a bummer.

On the video front, you’ve got resolutions up to 4K at 30fps. The full-resolution video I shot looked fine. Color and focus were good, as was white balance. Exposure could have been more consistent, however. It’s a shame that it can’t manage 4K at 60fps either.

The Motorola One 5G Ace has an average camera that might be considered good in a world without competitors such as the Google Pixel 4a series.

What I like about the Motorola One 5G Ace Motorola One 5G Ace review: Should you buy it?

If the Motorola One 5G Ace stood alone in the $400 price segment, it would be a decent offering. The problem for Motorola is that there’s a Google-sized elephant in the room. The Pixel 4a 5G is an excellent device, even if it is a bit more expensive than the One 5G Ace. If you don’t care about 5G, the regular Pixel 4a is a great alternative. Other competitors include the Samsung Galaxy A71 5G, and the OnePlus Nord N10, both of which are less costly than the Motorola. There’s also the $399 iPhone SE if you don’t mind looking outside of the Android ecosystem.

Beyond the market for $400 phones, there are other issues facing the One 5G Ace. Sure, it has a good screen, solid build quality, and some of the best battery life available on a modern phone. However, it ships with Android 10 and will only be updated once to Android 11. That’s a major misstep. The phone should have shipped with Android 11 and been on deck to receive updates to Android 12 at least. That’s a big limitation. Moreover, the cameras are just so-so, the 5G access is limited, and the bright silver coloring won’t be for everyone.

If you want nothing more than a big screen and excellent battery life, the 5G Ace has you covered. However, for $400 the Motorola One 5G Ace should be just a bit better.

Motorola One 5G Ace review: Not an ace up your sleeve