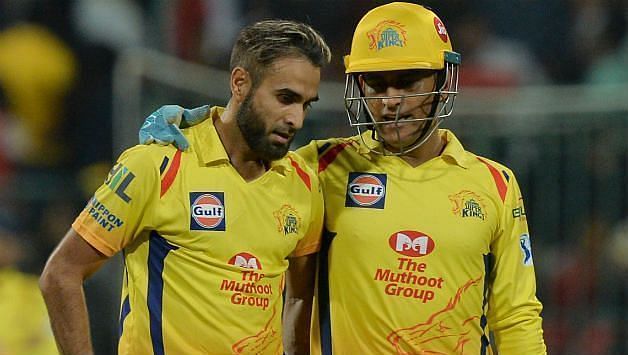 Chennai Super Kings leg-spinner Imran Tahir has stated that MS Dhoni knows so much about the game that all the bowlers need to do is concentrate on their bowling.

Imran Tahir joined the MS Dhoni-led CSK outfit during IPL 2018 and ended up winning the Purple Cap (most wickets in one edition) a season later, with 26 scalps in 17 matches.

“It is always a pleasure to play with that guy (MS Dhoni). Have been playing with him for the last three years. For me, he is a great, great human being. He understands everybody, respects everybody. We love him. He is the guy who has got the knowledge, and is the best in the world. You don’t have to say anything to him. He knows what field he needs to set for us, and we just need to come and bowl.

Tahir also added that there is a lot one can learn from MS Dhoni’s experience. The former South African spinner further added in this regard:

“It is a pleasure to be in his company. (One can) learn a lot of things. And that’s what you want as a cricketer. I’ll always have him in my team. I wish that I just keep going and play for CSK. I am really enjoying my cricket.”

Chennai Super Kings had a forgettable IPL 2020, missing out on the play-offs for the first time (when they have participated in the tournament).

However, according to Imran Tahir, nothing much has changed as far as the team culture is concerned. He said that MS Dhoni as well as the CSK players are ready to step in with complete commitment again.

“The guy (Dhoni) understands cricket. We have been calm as ever. Obviously, we were sad and disappointed because we weren’t winning. But, that’s not always (possible). I think the team culture is more important. Everyone understood what was happening. We are hoping for a very good season again. And, we are going to work harder and come back with better planning. Hopefully, we will do very well this year for CSK. As a player, the franchise looked after us so well. We want to give our 500 per cent for them,” the 41-year-old continued.

Tahir also admitted that the IPL is a great platform for youngsters to build their game, especially for Indian cricketers. He said:

“A lot of good players (have) come (out of IPL), and I am sure there is plenty of more to come. If you have a league like that, you are always going to produce players.”

Imran Tahir is among the players retained by CSK for IPL 2021.